Question: “What did you do this summer?” Answer: “I built the Advanced Light Source.”

It’s the rare undergraduate who can say they spent their vacation building a third-generation synchrotron, but that’s exactly what Seno Rekawa did in the summer of 1991 as an intern at Lawrence Berkeley National Laboratory. It was an auspicious start to his career. Less than five years later, he was working as a full-time engineer at Berkeley Lab and now is a regular mentor to budding high school and college engineers.

Berkeley Lab’s Center for Science and Engineering Education (CSEE), with its range of internship offerings, helps to fulfill one of the Lab’s mandates, which is to inspire and prepare this country’s next generation of scientists, engineers and technicians. This year more than 70 current and recent college students and almost 20 high school and college instructors participated in a CSEE program, working with Berkeley Lab researchers on science projects spanning from cancer research to cosmology to biofuels.

While not all interns go on to pursue careers in science, their CSEE experiences are often pivotal to their eventual career choices. And in the case of Rekawa and a handful of other participants such as Mary Singer, their Berkeley Lab internship not only launched their science careers, they have now come full circle and are mentoring students themselves. 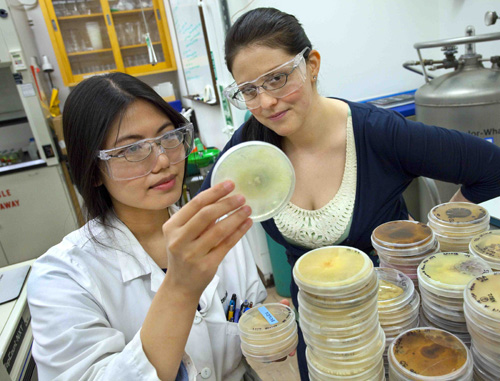 Singer was a biology major at the University of Texas at Austin about 10 years ago when she did an internship in the laboratory of Berkeley Lab scientist Tamas Torok of the Earth Sciences Division. “He trained us on general microbiology techniques, doing hands-on things. He was a great mentor,” Singer said. “My experience was really enriched specifically by his involvement.”

The following year, after graduating, she returned to Berkeley Lab for a second internship because she was still undecided on graduate school. After that summer, she was hired on staff as a research associate. “This is my first job after college,” she said. “I’m basically the lab manager now, and I really love it.”

She has collected environmental samples from throughout the Bay Area for a bioprospecting project and traveled to the country of Georgia last year for training in bacteriaphage virology. From Torok she has learned not only about microbiology but what it takes to be a good mentor. “He’s not the kind of mentor who will just give you an assignment and send you off,” she said. “He is very much involved. There are no stupid questions. He just really cares.”

With Torok as an example, Singer now mentors students herself. “There are a lot of guests, students and collaborators from other countries coming to our lab,” she said. “Tamas has passed many of the students onto me—we show them the ropes, give them that exposure. It helps people decide, do I want go to grad school, or do I not want to do this anymore?”

For Singer, the answer is clear: “I see this as my longterm career. I don’t see the need for grad school particularly as I really enjoy what I’m doing.” 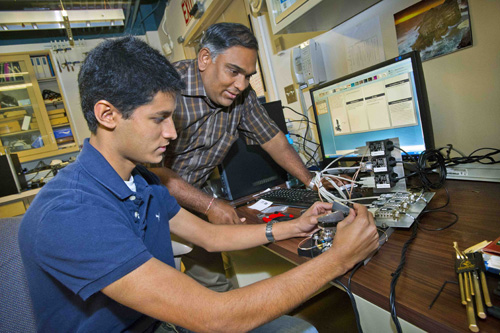 Rekawa, who is originally from Sri Lanka but grew up in the Bay Area, was going to Diablo Valley College when he did his first internship at Berkeley Lab. With about 10 other undergrads and mentors from the Accelerator and Fusion Research Division, they spent the summer building the storage ring components of the Advanced Light Source, one of the world’s brightest sources of ultraviolet and soft x-ray beams.

“It was very helpful. It gave me the hands-on experience I was looking for,” he said. “I was studying engineering, but this gave me the confidence to take the mechanical engineering path.”

He came back the following summer, then kept getting invited back year after year. Along the way he completed his engineering degree at the University of Wisconsin and had started a masters program when Berkeley Lab came calling again, this time with an offer from the Center for X-Ray Optics (CXRO), which develops instruments and techniques in extreme ultraviolet lithography, optics and nanoengineering. Rekawa couldn’t say no. “At the time there were no jobs available,” he said. “Even people with PhDs were having trouble finding jobs.”

Now he’s the chief engineer for CXRO, with seven engineers reporting to him. The work is cutting edge. “It’s very rewarding,” he said. “Almost every time, we’re making something nobody else in the world has built before. We’re always one or two steps ahead of industry.”

But in addition to contributing to world-class science and technology, Rekawa is also passionate about mentoring students. “I want to give them the same experience that I went through,” he said. “A lot of the students that come in here are really trying to figure out where they want to go, what they want to study. Sometimes you see strengths and weaknesses in somebody that they might not know about. You can guide them, or throw problems at them to see where they excel. By doing that they also get confidence.”

“I’m always very supportive of mentoring programs,” he continued. “It’s a lot of work from our side, but a lot of us in our group, from the scientific staff all the way to the machinists, encourage kids to come here, get their hands dirty. Sometimes we can actually mold them to be engineers.”