From intro class to a Science publication in three years

Holly Gildea didn’t come to Brown expecting to publish in one of the world’s top scientific journals, or even to study neuroscience, but by discovering and pursuing her passion, she’s achieved an auspicious start to a research career.

PROVIDENCE, R.I. [Brown University] — Growing up in Barrington, R.I., senior Holly Gildea had a sense that Brown University could be the college for her, and when she visited campus for “A Day on College Hill” in 2012, she became sure.

“I was excited to be in a place where people cared enough to listen when I was excited about something,” she said. 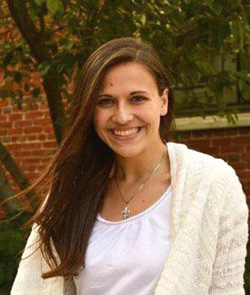 Gildea figured she’d study “something bio-related.” To explore such ideas, she enrolled in the University’s popular introduction to neuroscience that fall. She was hooked.

“I got so excited about brains there was no turning back,” she said.

By the next fall she was shopping for a place to do research. She wanted to get deep into the molecular workings of neuroscience. At the same time, a new professor who studied how neurons grow their connections was just setting up his lab. She emailed him asking to join the lab.

“We were still unpacking boxes,” Alexander Jaworski said. “She was really the first person to work in the lab.”

Jaworski put Gildea to work on his study of a new protein, NELL2, that helps guide how neurons spread their axons across the spinal cord to connect the left and right sides. As the paper was coming together, he needed some new experiments done and then he had to respond to questions from the journal’s reviewers. Gildea was there to help, staining and sectioning tissue samples, gathering data and carrying out other essential tasks.

The journal happened to be Science, the nation’s top scientific publication, and Gildea earned a spot as a co-author of the paper.

“I’m pretty excited about it, and that’s an understatement,” she said. “I feel lucky to be involved with people who are doing great research. It’s definitely a privilege.”

She figures it couldn’t hurt to have Science on her CV when she graduates in the spring.

“I’m applying to graduate school to hopefully get a Ph.D. in neuroscience or a related field,” she said. “I want to continue doing research because I really love it.”

There’s still work to do at Brown. In the next phase of Jaworski’s research, she’s looking to see if the findings of NELL2’s role in the spinal cord also apply in the brain.

“She’s looking at these mutant mice in more detail to see if there are other parts of the nervous system that are not looking like they should,” Jaworski said.