From Belgrade to Berkeley: A Postdoctoral Researcher’s Path in Particle Physics

After completing her Ph.D. thesis in calculating the mass of the W boson – an elementary particle that mediates one of the universe’s fundamental forces – physics researcher Aleksandra Dimitrievska is now testing out components for a scheduled upgrade of the world’s largest particle detectors.

Dimitrievska left the University of Belgrade in Serbia late last year to join the Department of Energy’s Lawrence Berkeley National Laboratory (Berkeley Lab) as the recipient of an Owen Chamberlain Postdoctoral Fellowship in Experimental Particle Physics & Cosmology in the Lab’s Physics Division. The fellowship will extend up to five years. 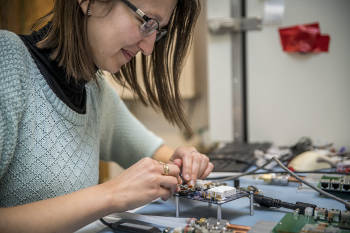 “Before, I was working behind a computer on coding. Now, I am in a clean room making wire bonds on computer chips, so it’s a much different experience,” Dimitrievska said. “I completely feel like a physicist now.”

The Chamberlain Fellowship was created in 2002 to honor the late Owen Chamberlain, a Berkeley Lab physicist and UC Berkeley professor who received the Nobel Prize in Physics in 1959 for his work on the team that discovered the anti-proton using the Lab’s Bevatron accelerator. He also worked on the development of the time projection chamber, a type of detector that has been widely used in particle physics experiments.

Dimitrievska’s path toward a career in particle physics led her to CERN’s Large Hadron Collider (LHC), a particle collider with an underground tunnel measuring 17 miles in circumference that is used to accelerate protons up to nearly the speed of light and collide them in detectors to measure the ensuing subatomic fireworks.

“I started as a summer student at CERN in 2012. After that I went back to Belgrade – my Ph.D. advisor was involved in work on the W boson mass measurement,” she said. He connected her with a CERN team led by French physicist Maarten Boonekamp.

The W boson and Z boson, which were both discovered in CERN experiments in 1983, are carriers of the “weak force” that is responsible for the particle process triggering fusion in the sun and other stars, the presence of radiation across the universe, and the breakdown of radioactive elements via a process known as beta decay. The W boson can have a positive or negative charge while the Z boson has a neutral charge, and each of these particles has a mass that is heavier than an iron atom.

But despite such large masses, it has been difficult to pinpoint the W boson’s mass because of the typical noisy mess of other particle processes associated with its creation in collider experiments.

“This is a really difficult measurement,” Dimitrievska said. The W boson’s mass must be calculated based on indirect measurements – a careful dissection of the data from related particle processes including recoil, in which particles are ejected from other particles in high-energy collisions at the LHC.

“We started from scratch, one step at a time,” she said, to find the best way to calibrate the W boson measurements. “We tried different approaches and different ideas. The most important things are the uncertainties,” she said, and in finding ways to reduce the uncertainties in the analyses of data from experiments. “It takes a lot of time to really calibrate each source.”

The team worked with data from millions of particle collisions that produced candidate W bosons in the 2011 run of the LHC. Ongoing studies will apply the same techniques developed for the 2011 analysis for larger sets of data accumulated at the LHC in 2012, 2015, and 2016. The latest sets of LHC data, because they can involve larger numbers of colliding protons, are even more challenging to pick through in isolating individual particle properties.

Such painstaking analyses can ultimately test whether the standard model of particle physics, developed through decades of experiments and theories, holds up to increasingly precise measurements.

She added, “The calibration and methods we used will also be used for other measurements at higher energies.”

The latest measurement, published Feb. 6 in the European Physical Journal C, determined the mass of the W boson to be about 80,370 mega (million) electronvolts, or MeV, with a statistical uncertainty of plus or minus 7 MeV, which is consistent with an average from previous measurements of about 80,385 MeV, with uncertainty at plus or minus 15 MeV. An electronvolt is a unit of energy that is a common measure of mass for subatomic particles.

Dimitrievska successfully defended her Ph.D. thesis on the W boson mass measurement at the University of Belgrade in December.

Her current work at Berkeley Lab is focused on testing 2-centimeter-by-1-centimeter prototype computer chips for the planned High-Luminosity LHC at CERN that will produce a higher volume of particle collisions and data.

“Because we will have more data, the readout system has to be faster,” she said. “Basically, we have to improve everything.”

The final version of the chips that she is testing will be installed in the inner part of the ATLAS and CMS detectors at CERN and must be radiation-hardened to withstand the constant drumming of high-energy particles. She has used 3-D printers at UC Berkeley to fabricate prototype components related to the chip assemblies she works with.

“For now, I am just testing if the chips work – how they are collecting data,” she said. A next step for her research group is to set up a particle beam to monitor how the chips perform under simulated experimental conditions.

As an active member of Berkeley Lab’s ATLAS collaboration team, Dimitrievska also participates remotely in several meetings per week hosted at CERN, and she said she looks forward to the opportunity to work on the LHC upgrade project as it moves forward from its R&D stages to actual fabrication, assembly, and installation.

“I think this is the really nice part about this work,” she said. “You can see the development of something that you can actually use later. You can participate first in the development of the detector, and then do the analysis and see how it really works.”