The first before-and-after view of an amphibian die-off has just been published by scientists working at the Smithsonian Tropical Research Institute in Panama.

Like a wave, the fungal disease that wipes out frogs—chytridiomycosis—advances through the Central America highlands at a rate of about 30 kilometers per year. After the disappearance of Costa Rica’s golden frogs in the 1980s, Karen Lips, associate professor in the biology department at the University of Maryland, quickly established a monitoring program at untouched sites in neighboring Panama. 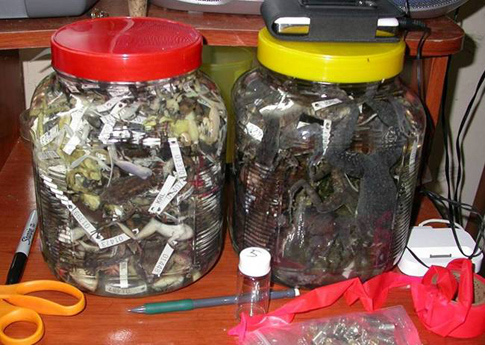 About the image above: Jar of dead frogs. Image credit: Karen Lips.

Of the 63 species that she identified during surveys of Panama’s Omar Torrijos National Park located in El Copé from 1998 to 2004, 25 species disappeared from the site in the subsequent epidemic. As of 2008, none of these species had reappeared there.

Were there additional species in the park—“cryptic” diversity not previously known to science? To find out, the authors used a genetic technique called DNA barcoding to quickly estimate that another 11 unnamed or “candidate” species were also present. Combining the field and genetic information, the authors discovered that five of these unnamed species were also wiped out. 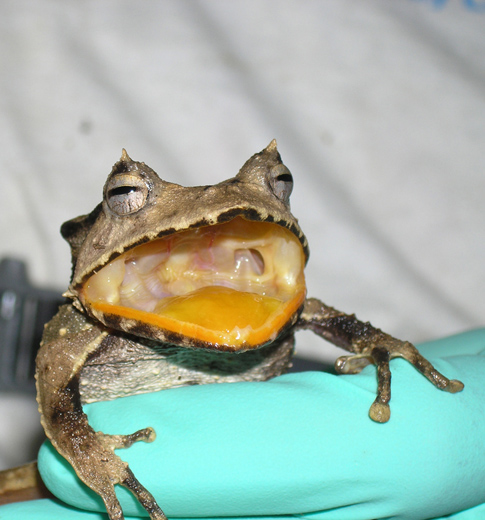 About the image above: Panamanian marsupial frog, Hemiphractus fasciatus, getting “swabbed”, i.e., tested for the presence of the microscopic fungal pathogen, Batrachochytrium dendrobatidis. Image credit: STRI

“It’s sadly ironic that we are discovering new species nearly as fast as we are losing them,” said Andrew Crawford, former postdoctoral fellow at STRI and member of the Círculo Herpetológico de Panamá, now at the University of the Andes in Colombia. “Our DNA barcode data reveal new species even at this relatively well-studied site, yet the field sampling shows that many of these species new to science are already gone here.”

An epidemic that wipes out a whole group of organisms is like the fire that burned the famous library of Alexandria. It destroys a huge amount of accumulated information about how life has coped with change in the past. Species surveys are like counting the number of different titles in the library, whereas a genetic survey is like counting the number of different words. 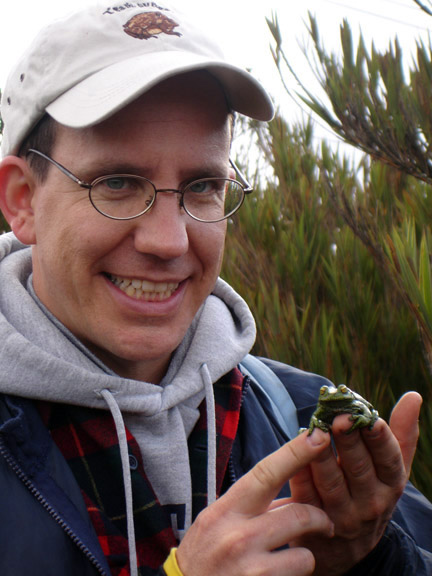 About the image above: Andrew Crawford, University of the Andes, Location = Chingaza National Park, Colombia.  The frog in the photo is Dendropsophus labialis. Image credit: Sandra Flechas.

“When you lose the words, you lose the potential to make new books,” said Lips. “It’s like the extinction of the dinosaurs. The areas where the disease has passed through are like graveyards; there’s a void to be filled and we don’t know what will happen as a result.”

“This is the first time that we’ve used genetic barcodes—DNA sequences unique to a given species—to characterize an entire amphibian community,” said Eldredge Bermingham, STRI director and co-author. “STRI has also done barcoding on this scale for tropical trees on in our forest dynamics-monitoring plot in Panama. The before-and-after approach we took with the frogs tells us exactly what was lost to this deadly disease—33 percent of their evolutionary history.” 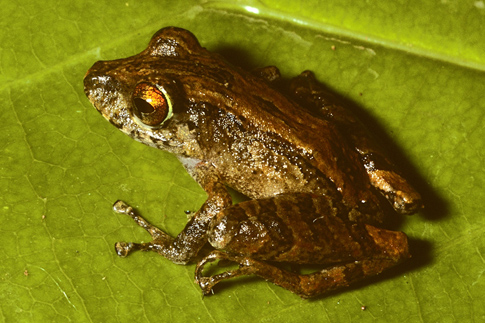 The U.S. National Science Foundation and the Bay and Paul Foundation funded the field work for this study, which is published online by the Proceedings of the National Academy of Science. Collection permits were provided by Panama’s Environmental Authority, ANAM.

STRI, headquartered in Panama City, Panama, is a unit of the Smithsonian Institution. The institute furthers the understanding of tropical nature and its importance to human welfare, trains students to conduct research in the tropics and promotes conservation by increasing public awareness of the beauty and importance of tropical ecosystems. Website: www.stri.org.