Using the world’s fastest laser pulses, which can freeze the ultrafast motion of electrons and atoms, UA physicists have caught the action of molecules breaking apart and electrons getting knocked out of atoms. Their research helps us better understand molecular processes and ultimately be able to control them in many possible applications.

In 1878, a now iconic series of photographs instantly solved a long-standing mystery: Does a galloping horse touch the ground at all times? (It doesn’t.) The images of Eadweard Muybridge taken alongside a racetrack marked the beginning of high-speed photography.

Approximately 134 years later, researchers in the University of Arizona department of physics have solved a similar mystery, one in which super-excited oxygen molecules have replaced the horse, and ultrafast, high-energy laser flashes have replaced Muybridge’s photo emulsion plates.

Using extreme ultraviolet light bursts lasting 0.0000000000000002 seconds – that’s 200 quintillionths of a second – Arvinder Sandhu and his team have managed to freeze the unimaginably fast action that ensues when oxygen molecules are zapped with high energies for incredibly short amounts of time.

Observing ultra-short events in atoms and molecules has become increasingly important as scientists are trying to gain a better understanding of quantum processes on the level of electrons, and ultimately even control those processes to design new light sources, assemble new molecules, or engineer new ultrafast electronic devices, among countless other possibilities.

While Sandhu’s group does not hold the world record for generating the shortest light pulses, it has pioneered their use as tools to solve many outstanding scientific questions. 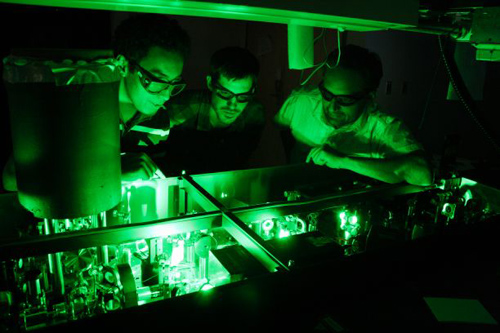 Its latest accomplishment, published in Physical Review Letters, is a real-time series of snapshots documenting what happens to an oxygen molecule when it pops apart after absorbing too much energy to maintain the stable bond between its two atoms.

Being able to resolve molecular processes on such short timescales helps scientists to better understand the microscopic dynamics behind the formation and destruction of ozone in the Earth’s atmosphere, for example.

Sandhu compared the principle to trying to take a picture of a fast-pitched baseball hurtling toward the batter.

“If we’re using a conventional camera, we’ll get a blurry picture, or the baseball may not even show up at all. But we want to study the ball in all its details, its surface, its seam, exactly where it is at any given time and so on.”

“There are two ways of doing this,” he said. “You can build a camera with a very fast shutter that opens and closes before the ball has a chance to move. Or use a technique called stroboscopy, in which you shine a light on the baseball for a very brief time during which you’ll capture its image.”

But substitute atoms or electrons for the baseball, and the analogy ends. Microscopic objects move too fast to be captured with either mechanical or electronic devices. 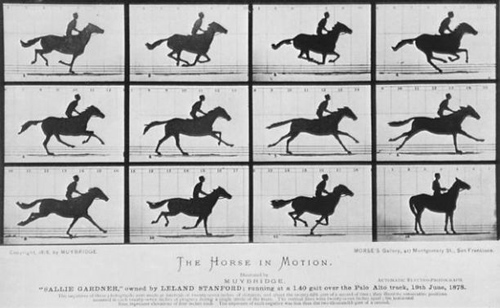 Eadweard Muybridge's famous "Horse in Motion" marked the beginning of high-speed photography. "In essence, we are following the same principle, only with modern techniques," Arvinder Sandhu said.

Sandhu said the only way to freeze the action at the level of atoms is to use light pulses in the form of short packets that last only femtoseconds (a billionth of a microsecond) or even attoseconds, which are 1,000 times shorter than femtoseconds.

To illustrate the duration of such light pulses, picture this: One attosecond is to one second what one second is to the age of the universe. To generate these attosecond light bursts, one has to start with very intense femtosecond laser pulses. The power delivered by a femtosecond laser pulse used in Sandhu’s lab amounts to one terawatt, the equivalent of the entire U.S. power grid, except it lasts extremely briefly.

While femtosecond laser pulses are snappy enough to resolve the motions of molecules such as the rhodopsin in our eyes, which has been clocked at changing its conformation in response to an incoming photon in 200 femtoseconds, they don’t cut it when it comes to capturing images of the much lighter and faster electrons.

“We were able to study what happens to the atomic structure of Helium in the presence of a strong electric field,” said Niranjan Shivaram, a graduate student in Sandhu’s lab, “in real time, as the laser pulse goes through.” Sandhu’s group published this groundbreaking study of attosecond electron dynamics in an earlier Physical Review Letters article. 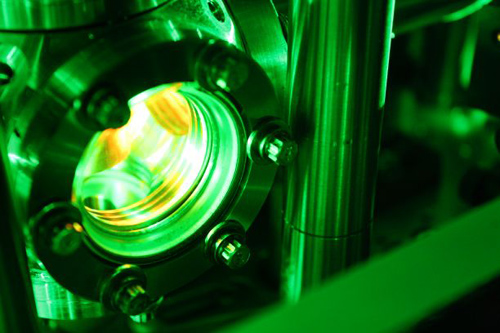 High-energy lasers are needed to generate the super-short pulses needed to "freeze the action" of molecular processes. (Photo by: Beatriz Verdugo/UANews)

In its latest work, Sandhu’s team has solved a long-standing debate by measuring how long it takes an oxygen molecule to break apart when zapped with high energy photons: 1,100 femtoseconds. Previous measurements of this phenomenon were in disagreement by as much as 100-fold.

In another innovation, this work provides the first experimental measurement of the time it takes for electron to be ejected from a super-excited atom. This process had only been simulated in theory. Sandhu’s group found that this spontaneous electron emission happens in about 90 femtoseconds.

“It is often assumed that if you pump enough energy into a molecule, you’d simply force the electron out,” Sandhu explained. “But instead, we observe the molecule shifting the excess energy around by talking to other electrons and nearby atoms, trying to share energy with them and keep its electron, until it suddenly breaks up.”

Henry Timmers, also a graduate student and lead author of the paper, applied attosecond lasers to study the dynamics in oxygen molecules.

“Not much is known about the physics on the level of excited molecules, because they’re very difficult to model mathematically,” Timmers said.

“When you pump the oxygen molecule to these high-energy states, there are multiple pathways to release its excess energy. We were able to analyze each of these pathways individually, and what goes on when we drive the electrons out of the atoms.”

According to Sandhu, tracking the movements of molecules, atoms and electrons is important to the understanding of physical and chemical processes, both natural and artificial.

“High-energy UV light constantly bombards our atmosphere and excites the molecules in it,” he explained. “They break up into excited atoms, which then lead to the formation of ozone or the breakup of ozone. These phenomena have ramifications for the understanding of the chemistry in the upper atmosphere.”

“Being able to measure the dynamics of electrons and atoms inside of molecules on the shortest possible timescale would allow us to understand the fundamental interactions that govern these molecules,” he added. “But more importantly, it will give us a knob to control or alter the properties of the dynamics of these atoms or molecules, because now we have a light pulse that can influence the motion in real time.”

“We are no longer a just measuring interactions after they have occurred. We’re actually trying to get into that interaction and control it, for example to steer chemical reactions in certain directions.”

The shortest laser pulses achieved so far last 67 attoseconds. According to Sandhu, even shorter “zeptosecond” laser pulses are conceivable, but for now attosecond-pulses get the attention.

“We are going to attoseconds because we want to study processes that are faster than the movements of molecules,” Sandhu said. “The practical aspects that affect life around us, and the technologies around us are generally governed by electrons and electronic motion.”

“The problem we are interested for the future is, what will happen when there are many electrons interacting with each other? Now the experiments become challenging and the theoretical modeling becomes impossible. That is why we have the high energies and the short time resolution. We now can actually look at those processes in real time.”