Free will seems a matter of mind, not soul

A new study tested whether people believe free will arises from a metaphysical basis or mental capacity. Even though most respondents said they believed humans to have souls, they judged free will and assigned blame for transgressions based on pragmatic considerations — such as whether the actor in question had the capacity to make an intentional and independent choice.

PROVIDENCE, R.I. [Brown University] — Across the board, even if they believed in the concept of a soul, people in a new study ascribed free will based on down-to-Earth criteria: Did the actor in question have the capacity to make an intentional and independent choice? The study suggests that while grand metaphysical views of the universe remain common, they have little to do with how people assess each other’s behavior.

“I find it relieving to know that whether you believe in a soul or not, or have a religion or not, or an assumption about how the universe works, that has very little bearing on how you act as a member of the social community,” said Bertram Malle, professor of cognitive, linguistic and psychological sciences at Brown University and senior author of the new study. “In a sense, what unites us across all these assumptions is we see others as intentional beings who can make choices, and we blame them on the basis of that.”

Profiles in a study of free will. Online interview subjects were asked about moral choices and culpability on the part of five active agents, from normal human to plain robot. Free will was associated more with the mind (intentionality, capacity for choice) than with the metaphysics of a soul. Image credit: Malle lab/Brown University (Click image to enlarge)

Results from a pair of experiments involving hundreds of online volunteers appear online in the journal Consciousness and Cognition.

To lead author Andrew Monroe, a former Brown doctoral student and postdoctoral researcher now at Florida State University, the findings also suggest that people have a perception of free will and culpability that is compatible with brain science in that it does not depend on a spiritual underpinning.

“Neuroscience is no threat at all to this concept of choice,” he said.

In the first trial, 197 demographically diverse Amazon Mechanical Turk volunteers considered the rule-breaking actions of a randomly assigned character or “agent.” That cast included a normal human, an “akratic” human with an inability to use his thoughts to control his actions, a cyborg with a human brain in mechanical body, an artificial intelligence in a human body, and an advanced robot. 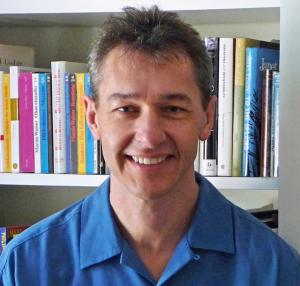 Bertram Malle. “I find it relieving to know that whether you believe in a soul or not, or have a religion or not … has very little bearing on how you act as a member of the social community.” Image credit: Brown University

Participants read about the agent and seven transgressions of varying seriousness and then rated the blame the agent deserved for each. Then the volunteers answered questions about the agent’s capacities, such as their ability to choose and to form intentions, and whether they had a soul.

The results showed a clear difference between having a soul and having free will. Volunteers generally said each human agent (normal or akratic) had a soul, but only said the normal human had free will. Meanwhile they resoundingly said the cyborg with a human brain had free will but generally did not believe it to have a soul.

When it came to blame, people judged the normal human and the cyborg (the two with a mind that had the ability to make choices) most harshly. The akratic human (despite having a soul in the estimation of most), and the entirely artificial robot received the least blame.

Statistically, the capacities that most predicted whether volunteers said an agent had free will and should be blamed for wrong actions were the ability to make a choice with intentionality and being judged as free from control of others. Having a soul was a poor predictor of being seen as having free will or meriting blame.

“The thing that seems to be most important, and that people do extremely reliably, is that they care about an agent’s capacity for choice-making,” Monroe said.

Little role for the soul

The second experiment, conducted with 124 online volunteers who had not done the first one, ran much the same with important differences. In this case the cast of agents explicitly embodied four types covering the range of combinations of soul and choice: Normal humans had a soul and the ability to choose, robots had neither, akratic humans had a soul but no choice, and cyborgs had choice but no soul.

This experiment explicitly asked participants whether they believe in souls: 68 percent said they did, and participants were moderately religious, averaging 2.1 on a 0 to 4 scale.

Again, however, the characteristics that best predicted whether people judged the different agents to have free will or to be worthy of blame were the psychological ones of choice and intentionality. Soul’s statistical role in predicting assessment of free will was only 7 percent and its influence in the degree of blame was zero.

In the statistical models, a shared notion of metaphysical and psychological capacities contributed some predictive value, but further analysis determined that it came almost entirely from the robot, who had neither a soul nor the ability to choose and therefore bore no free will or blame by any criteria.

The findings suggest that the concept of a soul, while widely held, is not readily applied in day-to-day situations, Malle said.

It also suggests that people could come to regard non-humans as having free will if they come to believe that those actors — for example, a sufficiently sophisticated robot — have the capacity of independent, intentional choice. Malle recently entered a collaboration studying whether robots can be infused with a sense of right and wrong.

Monroe is now studying the information processing that underlies how people make moral judgments and update those judgments in response to new information.

The John Templeton Foundation and The Florida State Research Foundation funded the research.