Scientists have found 450-million-year-old fossilized crustaceans entombed with their eggs and newly hatched offspring. At least one of the animals is a newly identified species.

The tiny ostracods — arthropods related to shrimps, lobsters, and crabs — were buried by a mudslide in an area of upstate New York, near Rome, at a time when the entire region was deep underwater. In one specimen, both eggs and early embryos are present with the adult female.

“This kind of detail is rarely preserved in the fossil record,” said Derek E.G. Briggs, an author of a research paper on the crustaceans published March 13 in Current Biology and director of the Yale Peabody Museum of Natural History, which supported the research. David Siveter of the University of Leicester in England, a specialist on fossil ostracods, is first author.

The discoveries extend knowledge of ostracods, the most abundant group of fossil arthropods, by about 25 million years and confirm their presence in the Ordovician period (485 million to 443 million years ago), when most of the Earth north of the tropics was ocean. These new specimens show that this kind of brood care has persisted for at least 450 million years, researchers said. 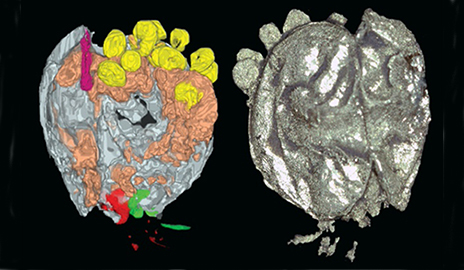 This X-ray image of the ostracod Luprisca incubi, found in 450 million-year-old rocks in New York State, shows eggs and possibly hatched offspring (in yellow) protruding from the rear of the shell. Image credit: Yale University

The brooding crustaceans were found in and around a fossil deposit first excavated in the early 1890s by Charles Emerson Beecher of Yale and known since as Beecher’s Trilobite Bed. The site, which was rediscovered in 1984, is celebrated for the remarkable preservation of its fossils, particularly the trilobite Triarthrus. In many cases these fossils include evidence of soft tissues as well as shells; the soft anatomy is preserved by the mineral pyrite. The ostracods came to light during a new major excavation as part of research on pyritization of the Beecher’s Bed fossils by Yale graduate student Una Farrell, now at the University of Kansas.

“Only a handful of examples are known where eggs are fossilized and associated with the parent,” Siveter said. “This discovery tells us that these ancient tiny marine crustaceans took particular care of their brood in exactly the same way as their living relatives.”

The recent discoveries yielded more than 100 specimens of ostracods frozen in time, a small number of them with eggs and/or newly hatched offspring. The adult animals are tiny — two or three millimeters long, the embryos the size of a grain of sand.

“These new discoveries show how important exceptional preservations are in revealing the history of life,” said Briggs, who leads the Yale project on the Beecher’s Bed fossils.

At least one of the ostracods is new species and the researchers named it Luprisca incuba after Lucina, the Roman goddess of childbirth.