The world that Garentina Kraja ’11 has come to know as a Yale student is vastly different from the one in which she grew up in Kosovo. But memories of the days when she was literally running for her life or watching families identify loved ones killed during the civil war in her homeland are so vivid that they easily bring tears to her eyes.

Her distance from home, the passing of time and the ability to look at that period of her life with greater subjectivity, Kraja says, have actually made her feel the pain of some of her war-time experiences more acutely since coming to Yale. 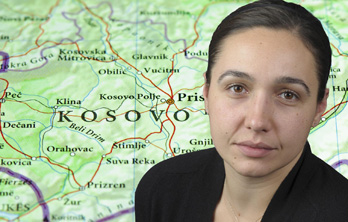 During the war that pitted ethnic Serbians and Albanians against each other, Kraja was one of a small group of Albanian journalists who helped alert the world to the violence and ethnic cleansing that was taking place in the former Yugoslav province.

Kraja’s work as a journalist earned her an invitation to be a Yale World Fellow in 2006, when she was just 27 — making her the youngest person ever selected to take part in the training program for emerging international leaders. Yet, despite that honor, she did not have a college degree.

“As Albanians in Kosovo, we lived in a segregated society under repression [after the disintegration of Yugoslavia],” says Kraja. “Our schools were not formal schools but were homemade and outside the system. Teaching took place in private houses. There was a shortage of books, and often our teachers just dictated to us a summary of what they knew. They did the best they could under the circumstances, but it was not a true learning experience.”

Auditing classes in Yale College while a World Fellow, and taking part in discussions with other World Fellows and members of the Yale community convinced Kraja that the University would be an ideal place for her to further her education. However, she was not terribly confident that she would be accepted as an undergraduate because of the gaps in her education.

“I was so happy when I saw the Yale Bulldog announcing I had gotten in,” recalls Kraja, who is majoring in political science and working toward a joint B.A./M.A. degree.

The 32-year-old Yale senior has had experiences that most of her classmates can barely envision.

When she was just 15, Kraja co-founded the “post pessimists,” a network of young people intent on sharing their experiences in the then conflict-ridden Kosovo, and engaging in dialogue with youths in other former Yugoslav provinces that had experienced war, including Croatia and Bosnia. She also began writing for and editing a newsletter published by the organization that portrayed the life of Kosovo’s Albanian youth in that period.

Just three years later, in 1997, the founder of Kosovo’s first independent Albanian newspaper invited her to become a reporter. One of the first stories she covered was a student-organized protest against the Serbian government that ended with a police crackdown on the activists.

“We were all young and had no real reporting experience,” says Kraja of the newspaper team. “My editor thought we could learn on the job, and he believed we would be a perfect fit because we were not politically tainted — we were too young to understand the implications of the politics, so we would be objective. It’s an incredible responsibility when you are 18 to be writing for a newspaper that is publishing for an audience of grown-ups.”

So hungry were Kosovo citizens for information about the increasing inter-ethnic violence around them that the newspaper was in high demand, says Kraja.

While Kraja wrote several breaking stories, most of her pieces focused on the human costs of war.

“I would go to into villages where people were identifying family members who were just killed,” she recalls. “Seeing their pain was very difficult, to say the least. There wasn’t a lot of fighting in the cities; that was happening in the rural areas where people were cut off. I was trying to collect the facts, trying to bring together the missing pieces and find out what was happening in these villages.”

There were times when she felt as though she was living “two realities,” Kraja says.

“During the day, I’d see people counting their dead, but at night, I would go back to Pristina [the capital] and go out with friends or work at the newspaper office,” recounts the Yale student, who chose to remain in the city with a younger sister after her family fled Kosovo in 1996. “We would talk about the war, but we basically felt untouched by it. Trying to reconcile these two realities was hard. I think I had built a defense mechanism that allowed me to go to a place where there was suffering, portray the facts and write about it in a pragmatic way. But when I think back, it’s not as pragmatic anymore. I’ve had time to disengage and think it through, and it is a different experience now.”

Life changed drastically for Kraja in 1999, when fighting between Serbs and Albanians escalated, and Serbian leader Slobodan Milosevic began his ethnic-cleansing campaign. It became increasingly difficult for her get through Serbian checkpoints to do her work, so Kraja worked as a translator for international journalists, whose freedom of movement was less limited, in order to continue her reporting. In March of that year, Serbian forces attacked the newspaper office, killing a guard and a prominent human rights lawyer who represented the newspaper, along with his two sons.

Fearing that she might be sought by Serbian police, Kraja — along with her boyfriend (a fellow reporter for the paper and now her fiancé), his family and her sister — were forced to go into hiding, moving frequently from place to place, just as NATO bombing of Yugoslavia began.

“We all thought that the bombing would last three nights and that Milosevic would surrender because he did not have the power to fight the world’s largest military alliance,” Kraja says. “But he had the stubbornness to fight against NATO, and the bombing lasted for 78 days.”

She recalls that the police would knock on the doors of homes and force Albanians to flee, giving them no time to collect any belongings. Kraja became part of a mass exodus to the train station, where she and the others boarded a train to Macedonia.

“It was a scary ride,” she remembers. “We soon realized that we were part of hundreds of thousands of people who were being driven out of their homes as part of an ethnic-cleansing campaign.”

Kraja and the others were left in an open field on the border between Kosovo and Macedonia, where 50,000 Albanian refugees were stranded in the April cold. [It is estimated that one million Albanians altogether were forcefully driven out of Kosovo.] She spent three days there before she was bused to a refugee camp in Macedonia.

There, Kraja discovered one of her editors, who had started a free newspaper to keep fellow refugees informed of how the war was progressing. Although Kraja had the opportunity to be reunited with her family in Albania, she chose to stay and report on the ongoing war.

“I’m very persistent,” says the Yale student, who during this time also served as a translator for ABC News. “I was committed to getting the whole story out. You wonder: If people are running for their lives, does it matter what they have to say? I believe it is a drama that you have to document, even though it was painful seeing so many people displaced, not in control of their own fate any longer.”

It was during this time, Kraja says, that she found it difficult not to be personally affected by the stories she was hearing, Yet, she was also consoled by stories of compassion.

“I saw this incredible solidarity between people inside Kosovo and also on the outside,” she says. “People would help each other out, and seeing that warms your heart.”

After three months in Macedonia as a refugee, Kraja went back home to Kosovo.

“I could not help but see the burnt houses and smell the stench from the fires and dead people and dead cattle,” she says. “A blood trail of the night guard who was killed on the eve of the NATO bombing led up to the newspaper office. The office was ransacked, and our computers were stolen or broken. NATO forces warned us that there were mines everywhere.”

For the next two years, Kraja reported on the aftermath of the war, including revenge attacks on innocent Serbs who stayed in Kosovo. In 2001, when she was just 23, she was hired by the Associated Press (AP).

“This helped to establish me as credible journalist,” she says. “Before, I couldn’t talk to people on both sides of the conflict because our newspaper was Albanian. With the AP, I could cover everything that was happening in Kosovo.”

One reason Kraja decided to come to Yale as a World Fellow was because she felt uncertain about her future goals, and believed that a new perspective would help her define them.

“I’m interested in conflict and in what happens to people on the ground in conflict, so my natural progression as a journalist would be to cover other wars,” she explains. “But I didn’t feel knowledgeable enough to do it, and being at Yale has helped to fill those gaps in my education.”

As a World Fellow, Kraja says, she was in awe of her “accomplished and successful” peers, and now she feels no less impressed by her undergraduate classmates.

“I have a very good group of undergraduate and graduate student friends,” she says. “I feel totally integrated here, even though I am older. Everyone I meet here brings something valuable to the table, either because of the lessons they have learned or the questions they are grappling with. I’m completely amazed by how disciplined Yale students are. I have to work hard here, and I go through the same anxiety over finals that they do!”

Kosovo, however, is never far from her mind, and when the former Yugoslav province declared its independence in 2008, Kraja took some of her undergraduate friends out to a restaurant to celebrate, and asked her dean at Timothy Dwight College for permission to go home and witness the birth of a nation.

Kraja is writing her senior thesis on the topic of rebel recruitment. She is uncertain about whether she will resume a career in journalism after she graduates next spring.

“Part of me wants to go home because I want to make a difference there,” she says. “If it weren’t for the experience of Kosovo, I probably wouldn’t ever have been at Yale. So I feel an obligation to give something back and to extend the outlook I gained at Yale to my home country. On the other hand, the opportunities outside of Kosovo are great. So I’m just waiting to see what will happen.”

Nevertheless, she admits, her homeland is always on her mind, and in her heart.

“No one wishes to live through war,” says Kraja, “But I would never change my experience — not any of it.”