As the world’s leading authority on beads manufactured from shells by California’s Chumash Indians, UCLA archaeologist Jeanne Arnold was stumped by a series of anomalous artifacts excavated at former settlements on the Channel Islands.

Pierced with more than one hole, often at unconventional angles or too close to the edges, the oddly configured multi-hole beads differ considerably from the smooth, round, precisely drilled beauties that served as currency among the Chumash prior to the arrival of Europeans in Southern California.

“Originally, I thought these were new, experimental forms executed by virtuoso bead-makers,” confessed Arnold, a researcher at UCLA’s Cotsen Institute of Archaeology and a UCLA professor of anthropology.

After closer analysis, however, she now believes the shell artifacts, which are nearly 250 years old, provide a rare window into a little-known world: the efforts of young apprentices, possibly children, among traditional peoples.

“Very likely, Chumash apprentices were learning to make money from their parents, and these were their practice pieces,” she said. 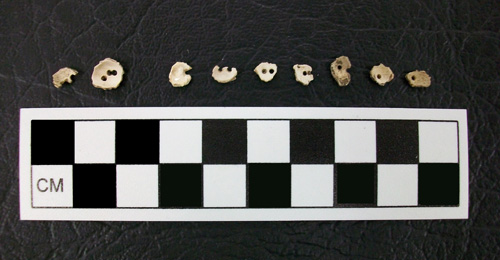 Chumash beads made by apprentices. Jeanne Arnold, a researcher at UCLA's Cotsen Institute of Archaeology and a UCLA professor of anthropology, argues that these irregular, multi-hole Chumash beads are the work of young apprentices, possibly children. Image credit: University of California

Arnold spells out her theories in the current issue of the Journal of Archaeological Method and Theory, which is posted online.

“Nothing like these artifacts has been discovered in California, even after decades of research at sites where shell-working took place,” Arnold said. “We just haven’t been thinking in terms of children’s contribution to the archaeological record.”

The rugged Channel Islands, located 60 miles west of Malibu, were home to more than 3,000 Chumash people who operated North America’s largest and most spectacular shell-working enterprise. Santa Cruz Island, which has an abundant outcropping of flint suitable for drilling tools, served as the center of these activities, which date back more than 1,000 years.

Islanders made shell ornaments, decorative beads and pendants, and most extensively of all, shell beads that served as currency. The group’s monopoly on currency-making made the islands the “mint” for Chumash transactions in Central and Southern California, Arnold said. Chumash-made beads have been found as far away as northern Nevada and the Four Corners area of the Southwest.

In the past 15 years, archaeology crews working under Arnold’s supervision have unearthed roughly 320 unconventional shell beads amid thousands of standard beads at the sites of two former villages on Santa Cruz’s coast. Previously dismissed either as mistakes or attempts at innovations by journeyman bead-makers, these tiny white beads actually reflect a range of production errors at the hands of novices, Arnold argues. 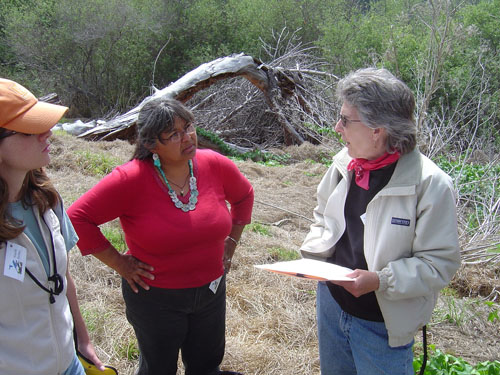 “We’re capturing that fascinating moment in the transition from childhood play to the tasks of adulthood,” she said.

To make beads, the Chumash split spiral-shaped Olivella biplicata shells into three or four fragments, Arnold said. Olivella is a small sea snail found on sandy beaches. Bead-makers then chipped the fragments into round shapes with stone. Using flint tools at first, but later metal needles, they drilled the beads and strung them on twigs in batches. Finally, the bead-makers smoothed the perimeters by grinding the strung batches on an abrasive slab of sandstone.

Most of the anomalous artifacts have two holes, but several have unprecedented third holes. The multiple holes appear to have been drilled after initial mistakes doomed the bead to failure for display or stringing. In addition to odd piercings, the beads in the study rarely feature ground perimeters. Arnold believes the unfinished state adds credence to the idea that the artifacts served as practice slates.

“It’s as though parents didn’t want to let children or novices learning the craft waste the chipped shell fragments, so they had them practice making holes over and over again in the same shell,” she said.

The anomalies were excavated in areas where archaeological research has determined that the Chumash lived in thatch-covered, round houses. Because the light would have been too weak for work inside the windowless dwellings, adults are believed to have produced the quarter-inch–wide beads just outside the huts. Arnold believes that child-rearing would have occurred alongside bead-production, offering an opportunity for youth to imitate their parents as they crafted the objects from the shells.

“Either through play or imitation, children would make these beads and eventually come to be taken seriously as novice bead-workers,” she said.

Among the few other cases of craft apprenticeship detected in the global archaeological record are tools made by children during the late Stone Age in the general area of Paris, France, and pots and tiny figurines made by novices learning basic ceramic skills about 800 to 1,000 years ago in American Southwest pueblos.

“Archaeologists have been working on these collections for more than 30 years. It never occurred to me or my colleagues to ask what the beads made by apprentices would look like and how young islanders were learning to make these beads, but now we have a better idea,” Arnold said. “I expect archaeologists will now go back and look with new interest at anomalies in everyday objects that have been dismissed as random mistakes. These artifacts may provide clues to how learning takes place and where it takes place, and the relationship between novices and their mentors.”