For many who work in his lab, Robert Crabtree is the quintessential mentor

Periodically, Yale chemistry professor Robert Crabtree strolls through his laboratory, sometimes whistling, and pauses to ask the students who work with him: “Everybody happy?”

According to Ulrich Hintermair, who conducted research in his lab as a postdoctoral fellow for the past two-and-a-half years, Crabtree’s concern with his research team’s wellbeing is just one of many qualities that distinguish him as a mentor at Yale.

Crabtree was honored in a campus ceremony this summer with the 2013 Yale Postdoctoral Mentoring Prize, which is awarded to the faculty member who is judged to have had the greatest positive impact on his or her postdoctoral appointees. Faculty members are nominated for the honor by postdoctoral scholars, and a committee appointed by Provost Ben Polak selects the prizewinner. The prize includes a cash award and a plaque.

Hintermair — and other past and current postdocs who nominated Crabtree for the honor — also singled out his enthusiasm for science; his consistent engagement in their lives and work; his wise advice on matters both personal and professional; his vast scientific knowledge; and the guidance he’s given to help them become better scientists.

“He is famous for welcoming new group members with ‘What do you want to do in the future? I need to know as soon as possible, because it is my job to get you there,’” wrote Hintermair in his nomination letter. “I’ve never heard of any adviser taking mentoring that seriously and personally.

“Importantly, this enthusiasm is not temporary,” continues Hintermair. “He constantly circulates job advertisements and training possibilities by email, and frequently reminds everyone not to neglect any aspect of professional job hunting. Bob encourages and fully supports our attendance at both national and international conferences and workshops, and he’s always happy to talk to colleagues about potential job openings or to make use of his contacts in industry. … Based on his plentiful advice, I was able to make some smart choices, and thanks to his meticulous preparation, I received two invitations that resulted in two offers from the first three applications I sent out!”

Crabtree matter-of-factly sums up his own philosophy about what it means to be a mentor: “You’re only as good as your students.”

“And I’m lucky; I get very high-quality students,” he adds. 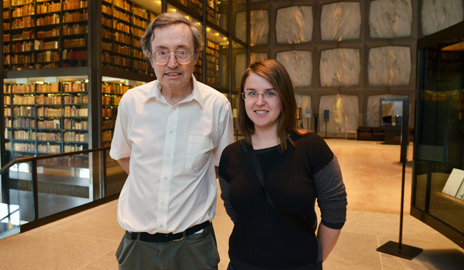 Crabtree is a world-renowned organometallic chemist whose research on alternative energy sources — particularly the conversion of energy from renewable into usable form — has resulted in groundbreaking discoveries. He receives about three applications a day from graduate and postdoctoral students interested in working in his laboratory, and he is able to hire only one of these candidates every two or three years.

The postdocs lucky enough to be chosen to work in Crabtree’s lab report that he is a genial leader who stands back to let them pursue their own research interests.

“I may sometimes suggest lines of inquiry, but they have to think up and build their own research projects,” says Crabtree. “I just offer hints so they can do the work, warning them only if I think they’ll hit a dead end.”

Likewise, he says, he assesses the personalities of those he mentors and then guides them accordingly.

“Some students treat me like a family member, telling me their hopes and fears,” explains Crabtree. “Others keep more of a division between their professional and personal lives, and I don’t force them to do otherwise. Some are supremely confident, while others are not. Sometimes a student needs to be more bold; others need to be more precise. I just try to encourage them in the things that will make them better, and happier, scientists.”

Born and educated in England, the son of a film director and a dancer, Crabtree says that his own interest in science began in early adolescence, a time when he started borrowing scientific textbooks from the library, learning things that were not taught in his school.

“I was really self-taught,” he says. “When I went on to study science formally, I knew more than anyone in the room, and that gave me confidence. From those early days, I thought if the sciences would have me, it would be a perfect career for me. If science hadn’t existed, I probably would have become a vicar in some church, or perhaps a naturalist.”

He recalls several teachers who particularly influenced him as a student. Malcolm Green, his undergraduate supervisor at Oxford University, was passionate about science and bold enough to tackle any new experiment, he recalls, while Joseph Chatt of the University of Sussex (where Crabtree earned his Ph.D.) taught him to pay close attention to detail. While he was a postdoctoral fellow at CNRS, in Gif-s-Yvette, France, in the early 1970s, his mentor Hugh Felkin taught him essential scientific techniques of value in his work in organic and inorganic chemistry.

“The combination of these attributes — being bold and enthusiastic, paying attention to minute details, and knowledge of useful techniques — has not only helped me in my career but has, unconsciously I’m sure, shaped the way I mentor my own students,” comments Crabtree.

Those who nominated Crabtree for the Yale Postdoctoral Mentoring Award noted that their mentor’s influence extends beyond science, and many claim he has also made them better people in general.

“[H]e is very interested in one’s private situation and hobbies, and considers these personal aspects when discussing career choices,” wrote Hintermair. ‘In my own case, for instance, this went as far as recommending areas to live when starting my new job in the United Kingdom. Although he is highly motivating, Bob is careful never to be pushy, because he knows that a career is not everything in life. My wife and I had a baby in 2012, and he gave me all the time we needed to enjoy and take care of our new addition.”

Several of his mentees also noted that the door to Crabtree’s office is always open, and that he encourages his postdocs to come in for any kind of discussion.

“I’m a lover of books, especially 18th- and early 19th-century British literature, and occasionally my students or postdocs are interested in that, too, so we have wonderful conversations,” he says. Crabtree — who has traveled extensively with his wife throughout Africa and to parts of South America — enjoys having conversations with his mentees about their home countries (and occasionally dining with them at ethnic restaurants). Some of his international postdocs and graduate students, he says, have invited him for visits to their homes, where he has had the pleasure of meeting their families.

“I think one of the nicest aspects of scientific research is that the group works in a social setting,” comments Crabtree. “Working in a small group fits my style.”

One of his greatest pleasures, he says, is when a young member of his team makes an important scientific discovery, or enlightens him with new information.

“Teaching at Yale, I’m in contact with highly intelligent people,” he says. “They often come to me with counter-arguments, or make a very important discovery. So it is not just me teaching them, but them teaching me.

“It’s also a pleasure when former students or postdocs come back to visit, to see that their lives have gone well for them. It’s nice to think that in some small way, I helped them along.”

Oana Luca, who earned her Ph.D. in chemistry in May, was among the mentees who attended the Postdoctoral Mentoring Prize ceremony in honor of the Yale scientist. Having worked in Crabtree’s lab for five years, she acknowledged that she was not eager to end her connection with her mentor and the members of his team.

“He is the most enthusiastic person I have ever met,” said Luca, who is now pursuing postdoctoral work at the California Institute of Technology. “I’m having trouble letting go. Working in his lab is like being in a family. He taught me that science takes patience, and that when things fail, you keep going. I’ll miss being a part of his team.”