Focusing on grains, researchers solve a mystery of rivers’ flow

Taking a simpler approach to a complex problem, Yale researchers have an answer for why large grains move more easily than smaller ones when driven by fluid flow along a riverbed — a question that has confounded scientists for decades.

Much of the natural world is shaped by flowing water that moves sediment, sand, pebbles, and other grains. Understanding exactly when and why grains begin to move in response to complex fluid forces would have major applications in ecology, agriculture, and other fields.

In the research group of Corey O’Hern, associate professor of mechanical engineering & materials science, physics, and applied physics, researchers developed computer simulations to observe how grains move and interact in a fluid flow over a granular bed — for instance, a river running over a bed of sand or gravel. Their results are published March 28 in Physical Review Fluid.

Determining how grains are carried along with the fluid flow is extremely complicated due to the many variables involved — including grain size, grain-grain friction, non-spherical grain shape, and fluid turbulence. When studying such a complex process, scientists often focus on the aspects of the problem they think are the most important and simplify other aspects as much as possible. Much of the prior research in this field has focused on the fluid forces that cause resting grains to start moving, but the Yale study suggests that more attention should be focused on what’s happening while the grains are already in motion. 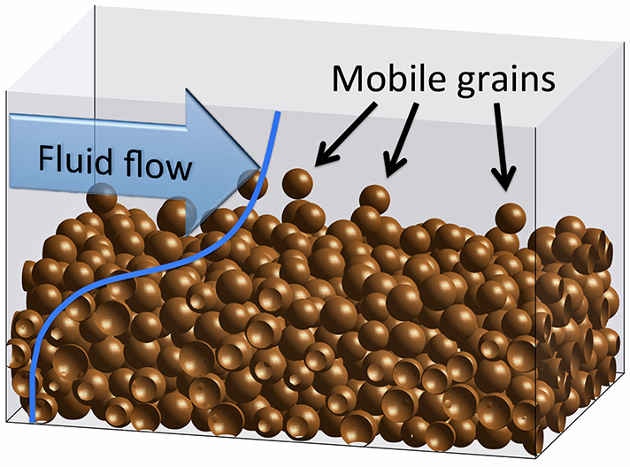 “Researchers have traditionally overemphasized the fluid mechanics and treated the grains more like a static bed,” said Yale researcher Abram Clark, lead author of the study. “Our approach considers the problem of sediment transport from the other direction, focusing more on the granular bed — especially moving grains — and treating the fluid in a simple way. Instead of thinking about when static grains will first start to move, we’re asking the question: When will moving grains stop?”

Grains in motion are essentially searching for a stable “pocket,” or a local region of the bed surface where neighboring grains can support them against fluid forces. This study used theoretical calculations and computer simulations to explain a longstanding mystery of why large grains move significantly more easily than small grains, even after accounting for the difference in weight. The researchers found that the interaction between grains and fluid causes large grains and small grains to move in fundamentally different ways. Large grains accelerate as they hop along the bed, whereas small grains do not. This allows very small grains, such as silt or fine sand, to stop much more easily than coarse sand or pebbles. All other factors, such as the degree of fluid turbulence or other characteristics of the grains, play a secondary role.

The O’Hern group started with a model system that included size-dependent grain dynamics, but was otherwise as simple as possible. Despite starting with spherical, frictionless grains and a greatly simplified fluid flow, the results from the computer simulations were very close to those produced in nature, as collected in more than 100 years’ worth of data from experiments and field studies. The group extended the simulations by varying additional parameters such as grain-grain friction, grain shape, and even the mathematical form of the fluid-grain interactions. However, as long as the correct size-dependent grain dynamics were included, the results were nearly identical to those found in nature.

“We do not add all of the physical effects into a model at once,” said Clark, a postdoctoral research associate in O’Hern’s research group. Simplifying the model to include only a few elements actually gives the researchers a clearer picture of the most important ingredients. “If you simplify a complex problem down to one or two ingredients, and you still predict the correct behavior, that’s very strong evidence that those ingredients are responsible for the behavior that you’re seeing in nature.”

Other authors of the study are Mark D. Shattuck of the City College of the City University of New York, and Nicholas T. Ouellette of Stanford University.  The Earth Sciences Division of the Army Research Office supported the research.