Flies of the World Embrace Vegetarianism

Microbe-eating flies from at least three different locations around the world recently have evolved into herbivores, feeding on some of the most toxic plants on Earth. Fly detectives and UA evolutionary biologists Noah Whiteman and Richard Lapoint are trying to find out what genetic pathways led the flies to such a major change of lifestyle.

For millennia, they buzzed through the woods, contentedly munching yeasts off the surfaces of leaves, bracken and rotting duff on the forest floor. But now, flies in the family Drosophilidae, whose disparate members dwell in areas all across the planet, have evolved into all-out vegetarians with a wicked diet of plants that are deadly to most other organisms.

What, University of Arizona scientists would like to know, has caused these flies, yeast-feeders for nearly 80 million years, to independently go cold turkey with respect to their formerly meaty diets?

With a National Geographic Research and Exploration grant, Noah Whiteman, an assistant professor in the UA’s department of ecology and evolutionary biology and Richard Lapoint, a Postdoctoral Excellence in Research and Teaching fellow in Whiteman’s lab, are investigating the flies’ evolutionary leap to herbivory, which has happened at least three times in three different species independently. 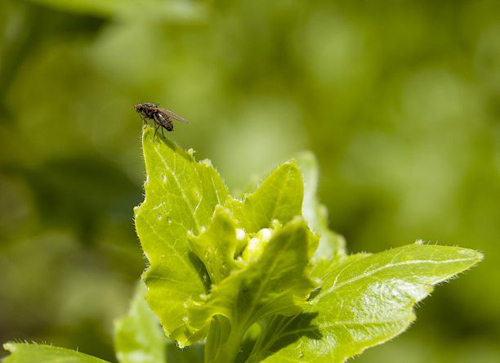 Scaptomyza nigrita, an herbivorous fly, poises atop its host plant, a mustard toxic to most other organisms. (Photo by: Noah Whiteman)

Their research recently made the cover of Genome Biology Evolution.

Understanding the genetic pathways that the flies use to detoxify the plants they eat could be helpful to keep them from becoming pests to crops, or to develop new anti-toxins for pharmaceuticals, LaPoint noted.

Introduced flies have already become agricultural pests in New Zealand and in the United Kingdom, Whiteman said. “It’s possible they will start attacking U.S. brassicas and canolas. If we’re interested in biofuels like canola, and they’re being attacked by insects, perhaps we can engineer the plants to be resistant.”

The buzzing insects of the family Drosophilidae are most commonly known as fruit flies, except that, as Whiteman said: “They’re not. People call them fruit flies, but they mostly eat yeast that’s living on rotting vegetation like fruit.”

Still, a fly is a fly, you might think. Wrong. “Even though the flies are in the same family, the amount of evolutionary distance that we’re talking about is similar to between humans and mice,” Whiteman said. They may appear similarly small and blackish to our comparatively gargantuan eyes, but the yeast-feeding and herbivorous flies are physically very different.

“Imagine that a tiger has evolved to become a cow,” Lapoint said. “That’s a whole lot of changes that need to happen never mind teeth getting blunter. It’s a major leap, and it’s all happened relatively recently in three places: in North America, Hawaii and Australia and Papua New Guinea.” Australia and Papua New Guinea used to be connected, and harbor the same herbivorous fly species. 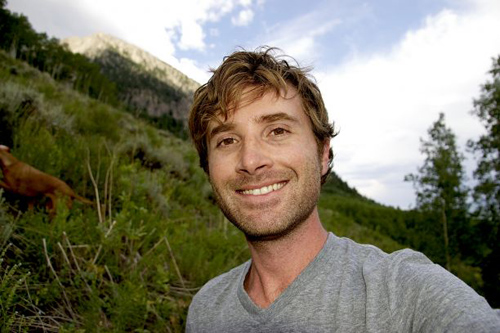 The fly detective: Noah Whiteman, an assistant professor in the UA’s department of ecology and evolutionary biology, searches for herbivorous flies atop Mount Crested Butte, Colo. (Photo by: Mark Beilstein)

The evolution of herbivory from non-herbivorous species is especially intriguing to evolutionary biologists because it is relatively rare in the animal kingdom, and plants, compared to animals, are difficult to digest. So why would herbivory evolve, and how do an organism’s genes give it the ability to consume plants?

A diet rich in toxins

Adding to the question of why the flies became herbivores is the fact that: “Everything they are eating is poisonous,” Lapoint said.

The flies in the South Pacific eat bracken ferns, which occur on Mt. Lemmon, have little nutrient value and an ample supply of potent toxins, including cyanogenic compounds fatal to most organisms. Meanwhile the Hawaiian lineage of flies has colonized Hawaiian ferns, Whiteman said. “What is it about ferns?”

The North American flies, stoic outsiders, have instead taken up a diet of mustard plants – also extremely toxic to most insects.

“That’s a big leap, but that’s evolved in all these lineages, so the question is: Does a common set of genetic changes underlie that leap?” Whiteman asked. 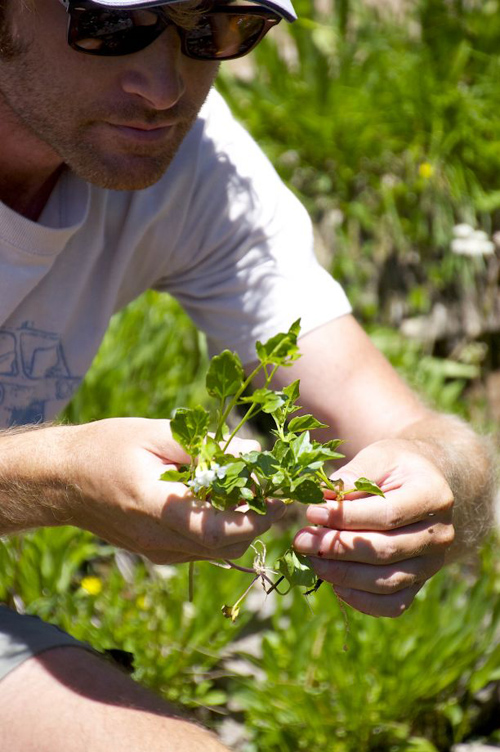 Like looking for a needle in a haystack: Noah Whiteman searches for herbivorous flies at 12,000-feet in the Rocky Mountains of Colorado. (Photo by: Erika Parrino)

It would appear so, since the flies of North America, Hawaii and the South Pacific are showing convergent phenotypes, or similar physical structures that could indicate similar genetic changes leading to herbivory.

Bird wings and bat wings are a good example of convergent phenotypes, Whiteman said: The wings look similar and serve the same purpose but in fact evolved from different parts of the body.

In the flies, convergent phenotypes can be seen in the females, for example, which have to cut into plants to lay their eggs in the leaves.

“Normally, carnivorous flies lay their eggs on some rotten pile of mush, so they don’t need a very robust ovipositor to deposit the egg,” Whiteman said. “They just kind of dump their egg in there. These new flies cut a hole out of a leaf.”

The herbivorous flies of North America, Hawaii and the South Pacific all have large, toothed ovipositors. “Instead of looking like a butter knife, it looks like a saw,” Whiteman said.

The presence of convergent phenotypes in distantly related groups can help the scientists to understand what genetic changes are responsible for turning the insects into herbivores.

Richard Lapoint, a PERT postdoctoral researcher in the UA’s department of ecology and evolutionary biology, combed the Hawaiian rainforest of Olaa looking for elusive fern-eating flies. (Photo by: Patrick O’Grady)

Searching for a fly in a jungle

Whiteman and Lapoint plan to collect larvae and adults in Australia and Hawaii, from both herbivorous and carnivorous lineages to observe how the herbivorous flies have changed genetically and in their phenotype, or the physical expression of traits coded for by their genome.

But first, they will have to find the flies.

“These flies have been reported in the old literature,” said Whiteman. When Lapoint did a preliminary survey searching for the flies in Hawaii, he instead found a significant non-native beetle population, which could be competing with the flies for the same plants, leaving the fly population small and disparate, or even extinct.

Also, “the original place where they were collected was recently a semi-active cinder cone,” Lapoint added. “Since then they’ve been tough to find. But they’ve always been good at surviving with not very many individuals in the population.”

Catching the flies is also a bit of a puzzler: “The adults have modified mouthparts, big tusks that the males use to fight each other,” Lapoint said. “That makes it more difficult to catch them because nobody knows if they actually eat anything if their mouthparts are warped to become these tusks. They could live very short lives and they don’t really come if you put out normal baits like food to attract them.”

The researchers must search for the flies using nets to catch insects and then sorting through them by hand, or by cutting open the fronds of ferns to look for flies living inside the plants.

“It will be like looking for a needle in a haystack,” Whiteman said. “But my guess is that the flies are there.”