A Yale-led study of the evolutionary history of Antarctic fish and their “anti-freeze” proteins illustrates how tens of millions of years ago a lineage of fish adapted to newly formed polar conditions – and how today they are endangered by a rapid rise in ocean temperatures.

“A rise of 2 degrees centigrade of water temperature will likely have a devastating impact on this Antarctic fish lineage, which is so well adapted to water at freezing temperatures,” said Thomas Near, associate professor of ecology and evolutionary biology and lead author of the study published online the week of Feb. 13 in the Proceedings of the National Academy of Sciences. 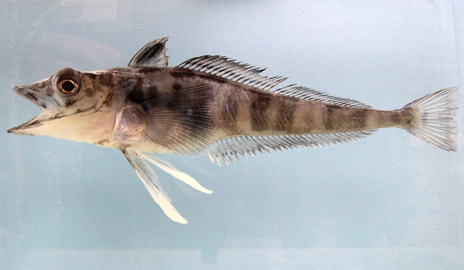 The development of antifreeze glycoproteins by notothenioids, a fish family that adapted to newly formed polar conditions in the Antarctic millions of years ago, is an evolutionary success story. Image credit: Yale University

The successful origin and diversification into 100 species of fish, collectively called notothenioids, is a textbook case of how evolution operates. A period of rapid cooling led to mass extinction of fish acclimated to a warmer Southern Ocean. The acquisition of so-called antifreeze glycoproteins enabled notothenioids to survive in seas with frigid temperatures. As they adapted to vacant ecological niches, new species of notothenioids arose and contributed to the rich biodiversity of marine life found today in the waters of Antarctica.

Notothenioids account for the bulk of the fish diversity and are a major food source for larger predators, including penguins, toothed whales, and seals. Yale’s Peabody Museum of Natural History has one of the most important collections of these specimens in the world.

The three species of fish are an example of the diversity this lineage achieved when it expanded into niches left by fish decimated by cold water environment. Image credit: Yale University

“The evolution of antifreeze was often thought of as a ‘smoking gun,’ triggering the diversification of these fishes, but we found evidence that this adaptive radiation is not linked to a single trait, but to a combination of factors,” Near said.

Now the same fish are endangered by warming of the Antarctic seas. Image credit: Yale University

This evolutionary success story is threatened by climate change that has made the Southern Ocean around Antarctica one of the fastest-warming regions on Earth. The same traits that enabled the fish to survive and thrive on a cooling earth make them particularly susceptible to a warming one, notes Near.

“Given their strong polar adaptations and their inability to acclimate to warmer water temperatures, climate change could devastate this most interesting lineage of fish with a unique evolutionary history,” Near said.