The first study to evaluate the biodiversity of arthropods in U.S. homes finds that humans share their houses with any of more than 500 different kinds of arthropods – at least on a short-term basis. Arthropods are invertebrate animals with exoskeletons, segmented bodies and jointed limbs, such as insects, spiders, mites and centipedes.

“This was exploratory work to help us get an understanding of which arthropods are found in our homes,” says Matt Bertone, an entomologist at North Carolina State University and lead author of a paper describing the work. “Nobody had done an exhaustive inventory like this one, and we found that our homes host far more biodiversity than most people would expect.” The work was done by researchers at NC State, the California Academy of Sciences (CAS) and the North Carolina Museum of Natural Sciences. 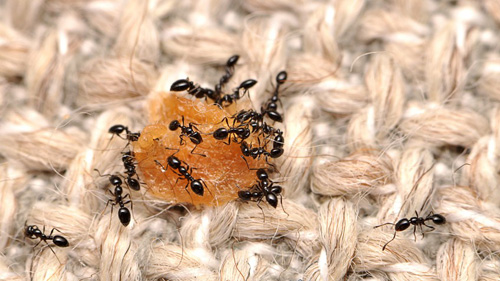 Under an initiative called the “Arthropods of Our Homes,” the researchers visited 50 free-standing houses within 30 miles of Raleigh, North Carolina, between May and October of 2012. Going room by room, the research team collected all of the arthropods it could find, both living and dead.

Across all 50 homes, the researchers identified no fewer than 579 different morphospecies of arthropod from 304 different families. Individual homes had, on average, about 100 morphospecies (between 32 and 211) and between 24 and 128 distinct families. The most commonly collected groups of arthropods in the homes were flies, spiders, beetles, ants and book lice. The term morphospecies is used to characterize animal types that are readily separable by morphological differences that are obvious to individuals without extensive taxonomic training. 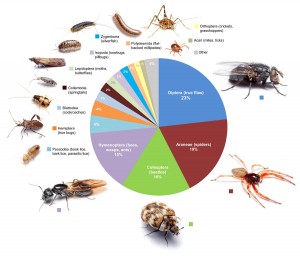 This graphic shows the proportional diversity of arthropod types across all of the rooms surveyed. Image credit: Bertone, et al. (Click image to enlarge)

“While we collected a remarkable diversity of these creatures, we don’t want people to get the impression that all of these species are actually living in everyone’s homes,” Bertone says. “Many of the arthropods we found had clearly wandered in from outdoors, been brought in on cut flowers or were otherwise accidentally introduced. Because they’re not equipped to live in our homes, they usually die pretty quickly.”

For example, researchers found gall midges (Cecidomyiidae) in all 50 homes. But these millimeter-long flies feed on outdoor plants and can’t survive indoors.

“The vast majority of the arthropods we found in homes were not pest species,” Bertone says. “They were either peaceful cohabitants – like the cobweb spiders (Theridiidae) found in 65 percent of all rooms sampled – or accidental visitors, like midges and leafhoppers (Cicadellidae).”

One of the findings that surprised researchers was that only five of the 554 rooms they sampled did not contain any arthropod specimens.

“We think our homes are sterile environments, but they’re not,” Bertone says. “We share our space with many different species, most of which are benign. The fact that you don’t know they’re there only highlights how little we interact with them.”

The research will likely open the door to new lines of scientific inquiry.

“This is only a first glimpse into the species that live in our homes, and more work needs to be done to flesh this picture out,” says Michelle Trautwein, the Schlinger Chair of Dipterology at CAS and co-author of the paper. “But these insights give us the opportunity delve down into some exciting scientific questions. Now that we have a better idea of which species are most common in homes, we can focus on studying them.

“Do they provide important services that we don’t know about in the ecosystems of our homes? Do any host microbial organisms that affect our health, for good or bad? And we can also begin to explore their traits to see if they share evolutionary characteristics that have made them better suited to live with humans,” Trautwein says.

“We also plan to assess how a home’s structure, its outdoor environment, and the behavior of its human residents influences the biodiversity of arthropods in the home,” Bertone says.

The paper, “Arthropods of the great indoors: characterizing diversity inside urban and suburban homes,” is published in the journal PeerJ. The paper was co-authored by Keith Bayless and Rob Dunn of NC State; Misha Leong of CAS; and Tara Malow of the NC Museum of Natural Sciences. The work was supported by the National Science Foundation under grants 1257960 and 0953350.