If projections for melting Antarctic sea ice through 2100 are correct, the vanishing landscape will strip Emperor penguins of their breeding and feeding grounds and put populations at risk.  But like other species that migrate to escape the wrath of climate change, can these iconic animals be spared simply by moving to new locations?

According to new research led by the Woods Hole Oceanographic Institution (WHOI), they cannot. Scientists report that dispersal may help sustain global Emperor penguin populations for a limited time, but, as sea ice conditions continue to deteriorate, the 54 colonies that exist today will face devastating declines by the end of this century. They say the Emperor penguin should be listed as an endangered species. The study was published in the June 6, 2017 edition of the journal Biological Conservation.

“We know from previous studies that sea ice is a key environmental driver of the life history of Emperor penguins, and that the fifty-percent declines we’ve seen in Pointe Géologie populations along the Antarctic coast since the 1950s coincide with warmer climate and sea ice decline,” said Stephanie Jenouvrier, WHOI biologist and lead author of the study. “But what we haven’t known is whether or not dispersal could prevent or even reverse future global populations. Based on this study, we conclude that the prospects look grim at the end of 2100, with a projected global population decline as low as 40 percent and up to 99 percent over three generations. Given this outlook, we argue that the Emperor penguin is deserving of protection under the Endangered Species Act.” 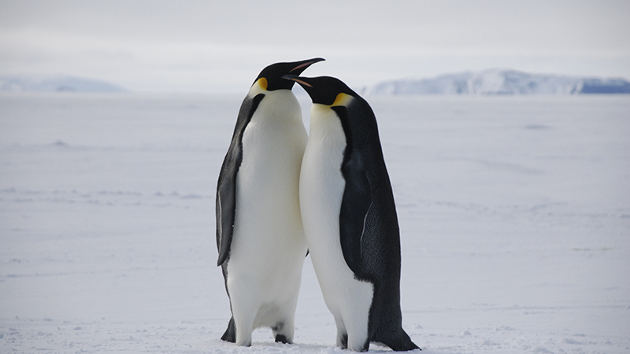 Jenouvrier worked with mathematicians to develop a sophisticated demographic model of penguin colonies.  The model tracks the population connectivity between penguins as they take their chances moving to new habitats offering better sea ice conditions.  According to Shaye Wolf, climate science director for the Center for Biological Diversity, the new modeling technique is key to informing policy around ‘much-needed protections’ for the Emperor penguin. (Photo by Mak Saito, Woods Hole Oceanographic Institution)

The relationship between Emperor penguins and sea ice is a fragile one: Too little sea ice reduces the availability of breeding sites and prey; too much sea ice means longer hunting trips for adults, which in turn means lower feeding rates for chicks. Only in the past few years have scientists become aware of the penguins’ ability to migrate to locations with potentially more optimal sea ice conditions.

“Before 2014, our studies of the impacts of climate change on these animals hadn’t factored in movement among populations,” said Jenouvrier. “But between then and now, a number of satellite imagery studies and genetic studies have confirmed their ability to disperse, so this was an important new variable to work into the equation.”

To determine whether migration will ultimately help Emperor penguins defend against population decline, Jenouvrier worked with mathematicians to develop a sophisticated demographic model of penguin colonies based on data collected at Pointe Géologie, one of the few places where long-term Emperor penguin studies have been conducted.

The model tracks the population connectivity between penguins as they take their chances moving to new habitats offering better sea ice conditions. “It’s like we’ve added roads between the cities the penguins live in and now get to see what happens when they travel between them,” she said. 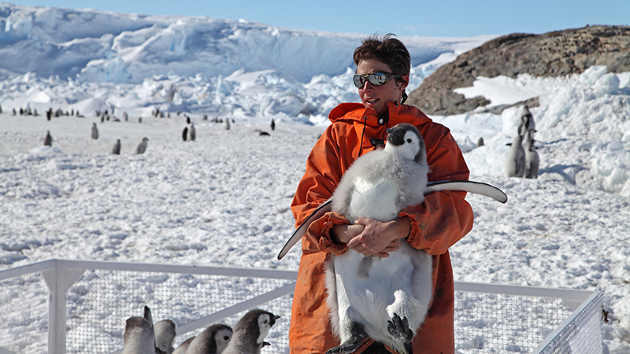 A range of model inputs were used, including penguin dispersal distance, behavior and rate of migration. The model also factors in end-of-century sea ice forecasts from climate projection models to predict the fate of each colony.

According to Shaye Wolf, climate science director for the Center for Biological Diversity, the new modeling technique is key to informing policy around “much-needed protections” for the Emperor penguin.

“Dr. Jenouvrier’s research has been at the forefront of advancing our understanding of how climate change is impacting these animals now and into the future,” she said. “Emperor penguins capture our imaginations because they are devoted parents and tough survivors. This work is another wake-up call that we need to make rapid cuts in carbon pollution if emperor penguins are going to have a future.”

One surprising aspect of the study, according to Jenouvrier, was the wide range of penguin responses to various dispersal scenarios represented in the model. In some cases, dispersal boosted populations whereas in other cases, it led to dramatic declines.

“We saw sustained populations through 2036, at which point there was an ‘ecological rescue’ that reversed the anticipated decline expected without dispersion for about a ten-year period,” she explained. “During that time, the penguins made wise choices in terms of selecting the highest-quality habitat they could reach. But the ‘rescue’ was only short-lived, and started plummeting in 2046.  When we averaged out all the scenarios, the model painted a very grim picture through 2100, regardless of how far penguins travelled or how wise their habitat selections were.”

The researchers conclude that while dispersal can be a very potent response to climate change in certain cases, the projected accelerated pace at which ice is melting in Antarctica makes for a tricky dynamic. Climate change isn’t stationary, so even if Emperor penguins move to locations with better sea ice conditions, those conditions could change dramatically from one year to the next.

The new findings will help inform a scientific status review launched in 2014 by the U.S. Fish and Wildlife Service aimed at determining if the Emperor Penguin should be protected under the Endangered Species Act. Wolf views the study as confirmation that climate change is putting the animals in danger, and as such, agrees with Jenouvrier that protection is in order. “Decisions to protect species under the Act must be based on science and not politics, so we hope the Fish and Wildlife Service will heed the science and give Emperor penguins the protections they deserve,” she said.

Jenouvrier agrees, and believes that adding Emperor penguins to the Endangered Species list could help accomplish a number of things. For example, it’s likely to trigger new fishing regulations in the Southern Ocean and highlight the need for new global conservation strategies. It may also help increase public awareness and “sensitize people to the impacts of climate change” which in turn could help reduce emissions. And, it may spur the need for more studies of Emperor penguins – something she’s already eyeing for the future.

“While we’ve learned that dispersal doesn’t change the ultimate fate of these animals,” she said, “we need to better understand the dynamics of what happens when they disperse. To do this, we’ll need to tag penguins from several colonies and monitor them. Eventually, we also want to understand if populations may eventually adapt to sea ice change, and more generally, how they will respond to the changing landscape in terms of breeding and other life history stages.”

This research was supported by WHOI, Mission Blue and The French National Research Agency.