Yale graduate student James Franco will be in the spotlight on the night of the Academy Awards as both co-host of the ceremony (with Anne Hathaway) and a “Best Actor” nominee (for “127 Hours”). But also vying for its share of the glitter will be a short Yale film on a big topic: the fledgling environmental movement in China.

“The Warriors of Qiugang” — co-produced by Yale Environment 360 (e360), an online publication of the Yale School of Forestry & Environmental Studies — has been nominated for an Academy Award in the category “Best Documentary: Short Subject.”

The film tells the story of villagers from China and their fight to shut down a chemical plant that is polluting their environment and endangering their health. 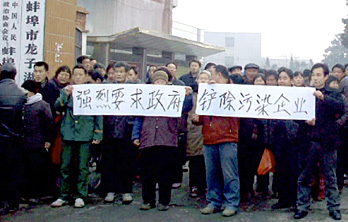 A scene from The Warriors of Quigang. Image credit: Yale University

“The Warriors of Qiugang” had its start three years ago, when filmmakers Ruby Yang and Thomas Lennon began following the unfolding drama. Eventually the two had hours of footage, but not the resources to edit, compile and finish the film.

As it happens, Lennon is a former roommate of Roger Cohn, executive editor of e360; both were members of the Yale College Class of 1973 and lived in Timothy Dwight College. The two discussed the project, and Cohn decided it was a perfect fit for the Yale magazine’s goal of “focusing on global environmental issues of broad significance.” The magazine partnered with Lennon’s production company to complete the film.

The final product, 39 minutes in length, debuted on Yale Environment 360 on Jan. 10.

“The Warriors of Qiugang” was designed to be premiered and screened exclusively online, and Cohn believes it may be the first Web-based documentary to be nominated for an Oscar.

Ironically, for the film to be eligible for an Academy Award, it had to be shown at least once on the big screen — so Yang and Lennon rented a theater last fall for a one-night debut. It is, in fact, a common practice for documentary filmmakers to sponsor their own screenings, since commercial theaters rarely show those types of films, notes Cohn.

As it happens, “The Warriors of Qiugang” — which is being shown exclusively on the Yale Environment 360 website (e360.yale.edu) — is once again destined for the big screen. The magazine is hosting a showing of the film at 5 p.m. on Thursday, Feb. 3, in Burke Auditorium of Kroon Hall, 195 Prospect St. A panel with Yang and Lennon will follow. The event is free and open to the public.

“And the nominees are …”

While Cohn was pleased to hear the news of the Oscar nomination, he wasn’t completely surprised, he says. “Knowing the talents of Ruby and Tom, I was aware that it might be a possibility.” Their 2006 film “The Blood of Yingzhou District,” about the AIDS crisis in China, won an Academy Award for “Best Documentary: Short Subject.”

Cohn does admit that he checked the Oscar website as soon as the nominations were up on Tuesday morning in hopes of getting good news.

“The Warriors of Qiugang” is not the first video that Yale Environment 360 has produced or co-produced since its debut in 2008 — nor is it the first to win acclaim. The e360 video “Leveling Appalachia: The Legacy of Mountaintop Removal Mining” received the National Magazine Award for Digital Media for Best Video last year.

The magazine will certainly continue to produce more videos in the future, notes Cohn. “Our goal is to reach a wide audience, an international audience, to raise awareness about global environmental issues. Videos are a great way to expand our audience,” he says, adding that e360 had 1.3 million unique visitors last year alone.

For the time being, Cohn is content to enjoy e360’s moment in the spotlight. “It’s amazing to get this recognition,” he says.

He is not, however, making plans to be on the red carpet come the night of the Oscars. “I suspect I’ll be in my tux watching television, hoping to catch a glimpse of Ruby and Tom in L.A.,” he says.

About “The Warriors of Qiugang”

The following description of “The Warriors of Qiugang” is from the story about the film on e360:

Like many villages in China’s industrial heartland, Qiugang — a hamlet of nearly 1,900 people in Anhui province — has long suffered from runaway pollution from nearby factories. In Qiugang’s case, three major enterprises with little or no pollution controls churned out chemicals, pesticides and dyes, turning the local river black, killing fish and wildlife, and filling the air with foul fumes that burned residents’ eyes and throats and sickened children.

The pollution from the Jiucailuo Chemical plant became so egregious that in 2007, Qiugang’s residents —working with a fledgling environmental group, Green Anhui — began to try to do something about it. Their efforts soon attracted the attention of Chinese-American filmmaker Ruby Yang, who with cinematographer Guan Xin and longtime collaborator Thomas Lennon, spent the ensuing three years chronicling the struggle of Qiugang’s increasingly emboldened population to curb the pollution that was poisoning them in their homes, schools and fields.

The exclusive e360 video report, “The Warriors of Qiugang” — co-produced by Yale Environment 360 — tells the story of how the villagers fought to transform their environment, and, in the process, found themselves transformed as well.

The 39-minute video focuses on an unlikely hero — farmer Zhang Gongli, now almost 60, who leads the village’s fight to shut down the chemical plant. Soft-spoken and easy-going, but with a backbone of steel, Zhang — who has only a middle-school education – quickly learns how to use China’s more stringent federal environmental laws to put pressure on the factory owners and their cronies in local and regional government.

“We are sorry to be born in this place,” says Zhang, “but we had no choice. This was forced upon us.”

The camera follows Zhang as he deals with threats from local criminals, rallies his neighbors, and travels to Beijing, where he attends a meeting of China’s emerging environmental movement. Zhang — like so many other Chinese — finds himself plunged into a new and wholly unfamiliar world.

“I feel scared — I really don’t want to be a hero,” Zhang says as he rides the train to Beijing. “But the next generation will suffer. We risk our lives for their happiness.”