In the Archives of Internal Medicine, researchers report that despite the conventional wisdom that feeding tubes help dementia patients resist pressure ulcers, feeding tubes actually are associated with an increased risk of ulcers developing. The tubes also don’t promote healing.

The analysis of thousands of nursing home patients with advanced dementia appears in the May 14 edition of the Archives of Internal Medicine.

“This study provides new information about the risks of feeding tube insertion in people with advanced cognitive impairment,” said lead author Dr. Joan Teno, a gerontologist and professor of health services, policy, and practice in the Public Health Program at Brown. “We see a substantial risk of people developing a stage II and higher pressure ulcer. We believe these risks should be discussed with family members before a decision is made to insert a feeding tube in a hospitalized nursing home resident with advanced cognitive impairment.”

Previous studies, which were much smaller in scope, had produced inconclusive findings. By using a combination of federally gathered data from nursing homes and Medicare claims, the researchers essentially mimicked a randomized controlled trial through the use of “propensity match cohort” study. Over a particular timeframe, they compared thousands of patients with and without ulcers who received a feeding tube to three times as many statistically similar patients with and without ulcers who did not get a tube. 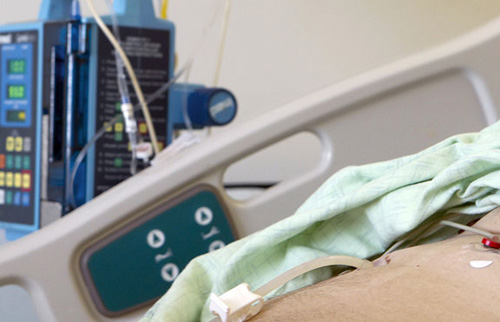 The risk of feeding tubes

The conventional wisdom among physicians — three-quarters of them according to one study — is that if anything, the nutrition delivered by feeding tubes should help patients resist ulcers. Perhaps with the idea of such a benefit in mind, physicians frequently don’t discuss the risks of feeding tubes with patients’ families, Teno has found.

The study did not measure how feeding tubes could cause ulcers, but Teno and her co-authors posit that because many patients become agitated by having a tube, they are often physically restrained and sedated with drugs. At the same time, feeding tubes can also increase the incidence of diarrhea. These circumstances, she said, may account for the development and worsening of pressure ulcers.

The new findings should lead doctors and families to ask more questions about whether feeding tubes are appropriate treatments, compared to careful hand feeding, for patients who have become so cognitively impaired that they can no longer eat independently, Teno said.

“To me this article is a game changer,” Teno said. “It provides solid evidence that there is a risk and that we need to discuss it. I’m hoping that people now can use this study to make better decisions in light of a patient’s goals and values.”

In addition to Teno, other authors of the paper were Pedro Gozalo, Sylvia Kuo, and Vincent Mor of Brown; Susan Mitchell of the Hebrew Senior Life Institute for Aging Research in Boston; and Ana Fulton of Butler Hospital.

The National Institute on Aging funded the study.