An international team of astronomers led by the California Institute of Technology and involving the University of Colorado Boulder has discovered the largest and farthest reservoir of water ever detected in the universe.

The distant quasar is one of the most powerful known objects in the universe and has an energy output of 1,000 trillion suns — about 65,000 times that of the Milky Way galaxy. The quasar’s power comes from matter spiraling into the central supermassive black hole, estimated at some 20 billion times the mass of our sun, said study leader Matt Bradford of Caltech and NASA’s Jet Propulsion Laboratory in Pasadena, Calif.

Because the quasar — essentially a voraciously feeding black hole — is so far away, its light has taken 12 billion light years to arrive at Earth. Since one light year equals about 6 trillion miles, the observations reveal a time when the universe was very young, perhaps only 1.6 billion years old. Astronomers believe the universe was formed by the Big Bang roughly 13.6 billion years ago. 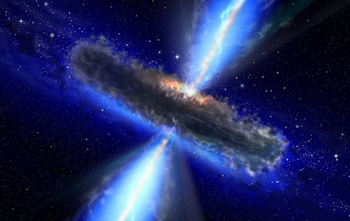 Artist's concept of a quasar, or feeding black hole, similar to APM 08279+5255, where a team of astronomers including CU-Boulder discovered huge amounts of water vapor. Illustration & Image credit: NASA/ESA

In an astronomical context, water is a trace gas, but it indicates gas that is unusually warm and dense, said Bradford. “In this case, the water measurement shows that the gas is under the influence of the growing black hole, bathed in both infrared and X-ray radiation,” he said.

“These findings are very exciting,” said CU-Boulder Associate Professor Jason Glenn, a study co-author. “We not only detected water in the farthest reaches of the universe, but enough to fill Earth’s oceans more than 100 trillion times.”

The water measurement, together with measurements of other molecules in the vapor source, suggests there is enough gas present for the black hole to grow to about six times its already massive size, said Bradford. Whether it will grow to this size is not clear, however, as some of the gas may end up forming stars instead, or be ejected from the quasar host galaxy in an outflow.

In the Milky Way, the mass of gaseous water is at least 4,000 times smaller than that in the quasar, in part because most of the water in our own galaxy is frozen into ice. While the water vapor in the Milky Way is found only in a limited number of regions, a few light years in size or smaller, the water in the distant quasar appears to be distributed over hundreds of light years, said the researchers.

The discovery was made with a spectrograph called Z-Spec operating in the millimeter wavelengths — found between the infrared and microwave wavelengths — at the Caltech Submillimeter Observatory, a 10-meter telescope near the summit of Mauna Kea, on the big island of Hawaii. Z-Spec’s detectors are cooled to within 0.06 degrees Celsius of absolute zero in order to obtain the exquisite sensitivity required for these measurements.

“Breakthroughs are coming fast in millimeter and submillimeter technology, enabling us to study ancient galaxies caught in the act of forming stars and supermassive black holes,” said CU-Boulder’s Glenn, who is a co-principal investigator on the Z-Spec instrument development and a fellow at CU-Boulder’s Center for Astrophysics and Space Astronomy. “The excellent sensitivity of Z-Spec and similar technology will allow astronomers to continue to make important and surprising findings related to distant celestial objects in the early universe, with implications for how our own Milky Way galaxy formed.”

Confirmation for this important discovery came from images obtained by the Combined Array for Research in Millimeter-Wave Astronomy, or CARMA, a sensitive array of radio dishes located in the Inyo Mountains of Southern California. The distant quasar under study is named APM 08279+5255.

The discovery highlights the utility of the millimeter and submillimeter band for astronomy, which has developed rapidly in the last two to three decades. To achieve the potential of this relatively new spectral range, astronomers, including the study authors, are now designing CCAT, a 25-meter telescope for the high Chilean Atacama desert. With CCAT astronomers will discover some of the earliest galaxies in the universe, and will be able to study their gas content via measurements of water as well as other important gas species, Glenn said.

In addition to Caltech, JPL and CU-Boulder, the Z-Spec collaboration includes the Institute of Space and Astronautical Science in Japan, the Observatories of the Carnegie Institute of Science and the University of Pennsylvania. Funding for Z-Spec was provided by the National Science Foundation, NASA, the Research Corporation and partner institutions.

* Source: University of Colorado at Boulder