Seemingly ordinary, water has quite puzzling behavior. Why, for example, does ice float when most liquids crystallize into dense solids that sink?

Using a computer model to explore water as it freezes, a team at Princeton University has found that water’s weird behaviors may arise from a sort of split personality: at very cold temperatures and above a certain pressure, water may spontaneously split into two liquid forms.

The team’s findings were reported in the journal Nature.

“Our results suggest that at low enough temperatures water can coexist as two different liquid phases of different densities,” said Pablo Debenedetti, the Class of 1950 Professor in Engineering and Applied Science and Princeton’s dean for research, and a professor of chemical and biological engineering. 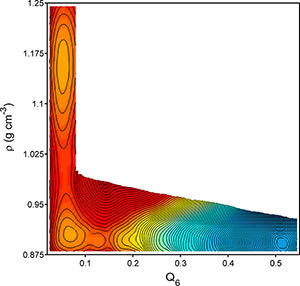 Princeton University researchers conducted computer simulations to explore what happens to water as it is cooled to temperatures below freezing and found that the supercooled liquid separated into two liquids with different densities. The finding agrees with a two-decade-old hypothesis to explain water’s peculiar behaviors, such as becoming more compressible and less dense as it is cooled. The X axis above indicates the range of crystallinity (Q6) from liquid water (less than 0.1) to ice (greater than 0.5) plotted against density (ρ) on the Y axis. The figure is a two-dimensional projection of water’s calculated “free energy surface,” a measure of the relative stability of different phases, with orange indicating high free energy and blue indicating low free energy. The two large circles in the orange region reveal a high-density liquid at 1.15 g/cm3 and low-density liquid at 0.90 g/cm3. The blue area represents cubic ice, which in this model forms at a density of about 0.88 g/cm3. (Image courtesy of Jeremy Palmer)

The two forms coexist a bit like oil and vinegar in salad dressing, except that the water separates from itself rather than from a different liquid. “Some of the molecules want to go into one phase and some of them want to go into the other phase,” said Jeremy Palmer, a postdoctoral researcher in the Debenedetti lab.

The finding that water has this dual nature, if it can be replicated in experiments, could lead to better understanding of how water behaves at the cold temperatures found in high-altitude clouds where liquid water can exist below the freezing point in a “supercooled” state before forming hail or snow, Debenedetti said. Understanding how water behaves in clouds could improve the predictive ability of current weather and climate models, he said.

The new finding serves as evidence for the “liquid-liquid transition” hypothesis, first suggested in 1992 by Eugene Stanley and co-workers at Boston University and the subject of recent debate. The hypothesis states that the existence of two forms of water could explain many of water’s odd properties — not just floating ice but also water’s high capacity to absorb heat and the fact that water becomes more compressible as it gets colder.

At cold temperatures, the molecules in most liquids slow to a sedate pace, eventually settling into a dense and orderly solid that sinks if placed in liquid. Ice, however, floats in water due to the unusual behavior of its molecules, which as they get colder begin to push away from each other. The result is regions of lower density — that is, regions with fewer molecules crammed into a given volume — amid other regions of higher density. As the temperature falls further, the low-density regions win out, becoming so prevalent that they take over the mixture and freeze into a solid that is less dense than the original liquid.

The work by the Princeton team suggests that these low-density and high-density regions are remnants of the two liquid phases that can coexist in a fragile, or “metastable” state, at very low temperatures and high pressures. “The existence of these two forms could provide a unifying theory for how water behaves at temperatures ranging from those we experience in everyday life all the way to the supercooled regime,” Palmer said.

Since the proposal of the liquid-liquid transition hypothesis, researchers have argued over whether it really describes how water behaves. Experiments would settle the debate, but capturing the short-lived, two-liquid state at such cold temperatures and under pressure has proved challenging to accomplish in the lab.

Instead, the Princeton researchers used supercomputers to simulate the behavior of water molecules — the two hydrogens and the oxygen that make up “H2O” — as the temperature dipped below the freezing point. 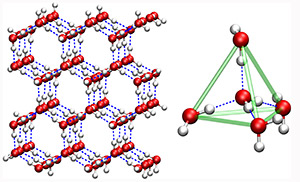 The team used computer code to represent several hundred water molecules confined to a box, surrounded by an infinite number of similar boxes. As they lowered the temperature in this virtual world, the computer tracked how the molecules behaved.

The team found that under certain conditions — about minus 45 degrees Celsius and about 2,400-times normal atmospheric pressure — the virtual water molecules separated into two liquids that differed in density.

The pattern of molecules in each liquid also was different, Palmer said. Although most other liquids are a jumbled mix of molecules, water has a fair amount of order to it. The molecules link to their neighbors via hydrogen bonds, which form between the oxygen of one molecule and a hydrogen of another. These molecules can link — and later unlink — in a constantly changing network. On average, each H2O links to four other molecules in what is known as a tetrahedral arrangement.

The researchers also looked at another facet of the two liquids: the tendency of the water molecules to form rings via hydrogen bonds. Ice consists of six water molecules per ring. Calculations by Fausto Martelli, a postdoctoral research associate advised by Roberto Car, the Ralph W. *31 Dornte Professor in Chemistry, found that in this computer model the average number of molecules per ring decreased from about seven in the high-density liquid to just above six in the low-density liquid, but then climbed slightly before declining again to six molecules per ring as ice, suggesting that there is more to be discovered about how water molecules behave during supercooling.

A better understanding of water’s behavior at supercooled temperatures could lead to improvements in modeling the effect of high-altitude clouds on climate, Debenedetti said. Because water droplets reflect and scatter the sunlight coming into the atmosphere, clouds play a role in whether the sun’s energy is reflected away from the planet or is able to enter the atmosphere and contribute to warming. Additionally, because water goes through a supercooled phase before forming hail or snow, such research may aid strategies for preventing ice from forming on airplane wings.

“The research is a tour de force of computational physics and provides a splendid academic look at a very difficult problem and a scholarly controversy,” said C. Austen Angell, professor of chemistry and biochemistry at Arizona State University, who was not involved in the research. “Using a particular computer model, the Debenedetti group has provided strong support for one of the theories that can explain the outstanding properties of real water in the supercooled region.”

In their computer simulations, the team used an updated version of a model noted for its ability to capture many of water’s unusual behaviors first developed in 1974 by Frank Stillinger, then at Bell Laboratories in Murray Hill, N.J., and now a senior chemist at Princeton; and Aneesur Rahman, then at the U.S. Argonne National Laboratory. The same model was used to develop the liquid-liquid transition hypothesis.

The team included Yang Liu, who earned her doctorate at Princeton in 2012, and Athanassios Panagiotopoulos, the Susan Dod Brown Professor of Chemical and Biological Engineering.