Millions of people each year remove wrinkles, soften creases and plump up their lips by injecting a gel-like material into their facial tissue. These cosmetic procedures are sometimes called “liquid facelifts” and are said to be minimally invasive.

It’s rare, but sometimes things go wrong. In a matter of minutes, patients’ skin can turn red or blotchy white and the injected area becomes painful. Vital blood supply to the face is restricted and if untreated, parts of the tissue will die. That scenario is irreversible and can leave deep scars.

Physicians haven’t been able to pinpoint why this happens because until now it was difficult to see how the injected fluid, or filler, behaves in facial tissue.

New imaging technology from University of Washington engineers allows scientists to analyze what happens within the smallest blood vessels during an injection. This finding could be used to prevent accidents during procedures and help clinicians reverse the ill effects if an injection doesn’t go as planned.

“Filler-induced tissue death can be a really devastating complication for the patient and provider,” said Shu-Hong (Holly) Chang, a UW assistant professor of ophthalmology specializing in plastic and reconstructive surgery. “This noninvasive imaging technique provides far better detail than I’ve ever seen before and helped us figure out why this is happening.” 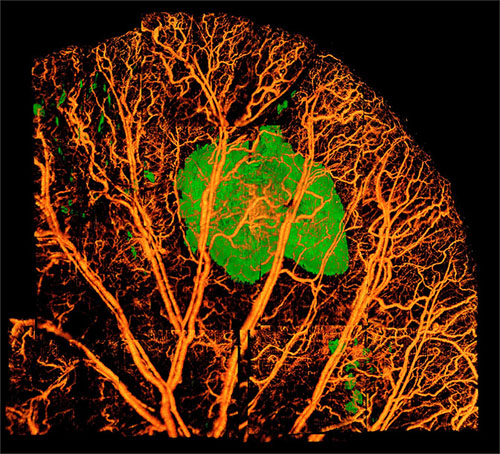 This image shows a mouse ear after a successful cosmetic filler injection. The filler, in green, rests in the tissue without blocking the blood vessels and veins. Image credit: Siavash Yousefi, U of Washington

Using this technology, Chang and her team saw that complications arose when filler was inadvertently injected into the bloodstream rather than in the intended soft tissues of the face. The gel builds up in a vessel, blocking blood movement and oxygen exchange. The team tested this in the ears of mice, which offer a model of what can happen in the blood vessels of a human face, Chang said.

She presented the results in November at the annual meeting of the American Society of Ophthalmic Plastic and Reconstructive Surgery showing that filler injections into blood vessels are most likely the cause of tissue death and other complications associated with the cosmetic procedure.

Ruikang Wang, a UW professor of bioengineering, and his lab pioneered this fine-resolution imaging, called optical microangiography. It can turn out 3-D images of the body’s vascular network by shining a light onto the tissue without touching it or adding any fluorescent dyes.

“We can visualize how blood responds to the cosmetic filler gel, even looking at the responses of each individual vessel. No other technique can provide this level of scrutiny,” Wang said. 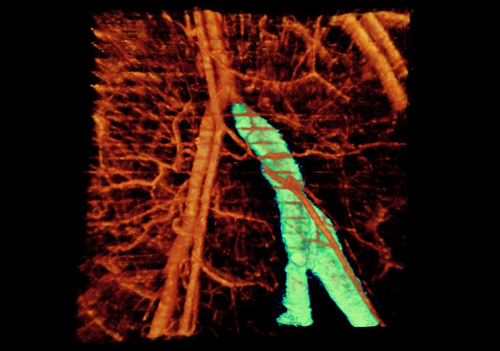 In this image the cosmetic filler (green) is shown blocking a major vein in a mouse ear. This scenario can happen in human faces during facelift procedures. Image credit: Siavash Yousefi, U of Washington

“Our niche is imaging the microvascular system,” said team member Siavash Yousefi, a UW graduate student in bioengineering. Other applications of the technology include analyzing how wounds heal, tracking what happens during strokes and traumatic brain injuries, and imaging human eyes to study diseases such as glaucoma and macular degeneration. 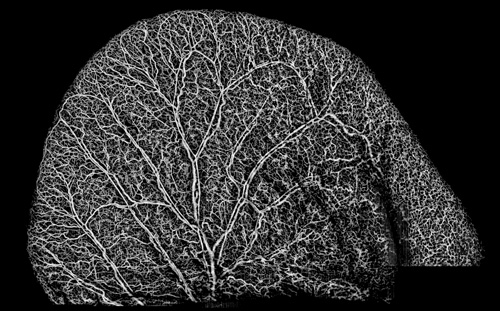 Cosmetic filler procedures have surged worldwide in recent years, particularly in Europe and Asia. In 2012 in the U.S. about 2 million procedures were performed. Up to 800 patients reportedly suffered serious complications, including potentially permanent disfigurement.

During the procedure, a practitioner injects the gel-like solution, often a natural substance called hyaluronic acid, multiple times into a person’s face. Restriction of blood to the tissues, called ischemia, often doesn’t show up until later, when the patient develops pain and sees changes on the surface of the skin, meaning the tissue is dying.

Some practitioners suggest using massage and warm compresses to treat the area, while others tell patients to take aspirin, but the field doesn’t have a standard course of action for treating these complications, Chang said. She has been called in for several emergencies to treat other practitioners’ patients who show signs of a failed procedure. This can lead to tissue death and even blindness if the affected area is near the eyes.

With this new understanding, practitioners can try to reverse the effect of vascular blockage by injecting an enzyme that dissolves hyaluronic acid fillers. The research team is now testing all types of available cosmetic fillers to see if their results hold on each brand and evaluating new treatments for reversing procedure complications.

“Our lab is trying to develop novel and clinically useful biomedical imaging techniques for early diagnosis, treatment and management of human diseases. Using this technology to better understand facelift complications is a perfect example that fulfills this mission,” Wang said.

The research was funded in part by the organization Research to Prevent Blindness and a Latham Vision Research Innovation Award.