Since it was introduced to North America in the late 19th century, the house sparrow has received little love. “Nothing can be urged in its favor,” declared an 1891 editorial in the New York Times. A few years later, the same newspaper deemed the birds “rats in the air.” Adding insult to injury, the International Union for Conservation of Nature has long kept the house sparrow on its unceremonious list of species of “least concern.”

Not all are so dismissive, though. With the help of technology and know-how at the Center for Engineering Innovation and Design (CEID), a postdoctoral fellow at the Yale University PET Center is gaining insights into the inner lives of these long-maligned birds. In many ways, it turns out, we are not so different from the house sparrow.

“There are some interesting things you can learn about birds that you can apply to humans,” said Christine Lattin, a researcher in the lab of Richard Carson, professor of biomedical engineering and radiology & biomedical imaging. Working with the CEID, Lattin is currently focusing on the physiological stress response of the house sparrow. 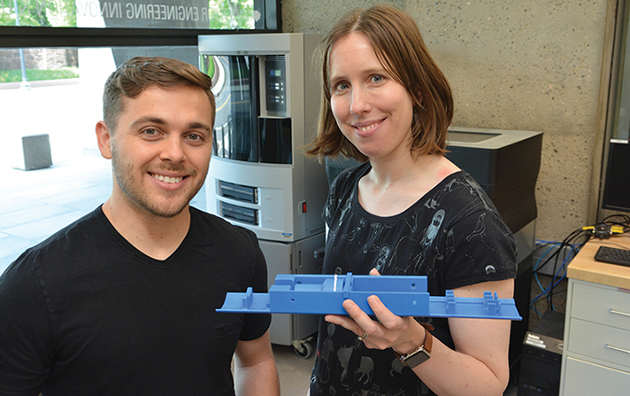 Max Emerson, a fellow at the Center for Engineering Innovation and Design, and Christine Lattin, a fellow in radiology and biomedical imaging, with a 3D-printed device that holds a house sparrow during a medical imaging process. Image credit: Yale University

Unlike rats or mice, house sparrows are not conditioned to captivity (Lattin finds the birds in the wild, catching them herself), which is important if you want to measure their stress response to captivity. “I think captivity is potentially a really powerful kind of model for chronic stress,” Lattin says. “A bird brought into captivity is in some ways not that different from a person who’s suddenly thrown into a totally alien and stressful environment, like a soldier in combat or a child taken to a foster family. It’s an alien environment, and it’s highly stressful. That’s one reason I’m interested in using the birds.”

Medical imaging suits Lattin’s work well because it allows for multiple scans of the same animals, which give researchers a better way to study variation in an individual subject, including before- and after-treatment results. Without it, Lattin said, most brain studies on animals require euthanizing the animals involved and slicing the brains.

Positron emission tomography (PET), which uses a special scanner and a radioactive drug known as a tracer to identify different types of activity in the body and brain, is the type of imaging most useful for Lattin’s research. But making a PET scan of a bird isn’t easy. Only a few other labs in the world use this imaging technology for birds, so there’s no universal equipment to facilitate the process. Other animals, like rats and mice, have holders specifically designed for their body shapes for medical imaging; none exists for birds. So researchers working with birds have to make do with homemade, makeshift solutions, often with less-than-perfect results. Generally, researchers will anesthetize the bird, wrap it loosely in gauze and tape the gauze to the scanner.

“I mean, it’s not an ideal system at all,” Lattin says.

So Lattin reached out to the CEID. There, CEID Fellow Max Emerson is using the Center’s 3D printer to develop a holder customized for house sparrows. The trick, said Emerson, is designing it in such a way that the birds stay in a uniform position. Because the birds’ brains are so small, even the slightest twitches can significantly diminish the quality of PET images.

“The goal was to make a standardized position for the bird,” Emerson said. “Then, the researchers can look at a lot of studies without having to do too much post-processing of the data. It minimizes head movement without restricting their abdomen, so they can breathe while they’re under anesthesia.”

The device also allows for better monitoring of the birds’ breathing while the imaging is being done for more precise administering of anesthesia. “When they’re anesthetizing the birds, they usually like to err on the side of lighter anesthesia rather than heavier, because if it’s too heavy, the bird could stop breathing and they can die. But when erring on the side of lighter, the bird will sometimes come out [of anesthesia].”

And because birds don’t thermoregulate well under anesthesia, the device also holds a very thin, flexible heating pad. There’s a notch for the bird’s neck, mimicking the best way to hold a bird in the hand (called a “bander’s grip”). It includes a cone designed to fit the contours of the bird’s head, which is connected to a tube that pumps the anesthesia. Emerson based it on very detailed computed tomography (CT) images of the birds’ skulls, which were created in collaboration with Elliott Brown, assistant professor of radiology & biomedical imaging at the Yale School of Medicine.

Emerson also created special anchors that attach the holder to the scanner bed, and a spacer to make sure it is always placed in the same location on different days they perform scanning. Other notches hold the syringes that deliver drugs and the radioactive tracer. Best of all, the entire device is made of lightweight, low-density plastic, which is important because very dense materials, such as metal, can cause errors and distortion in PET-CT imaging.

Previous methods for keeping the bird in place made it difficult to observe the bird during imaging. Lattin recalls one session, scheduled for an hour, which had to be stopped after 10 minutes because she couldn’t monitor the bird’s breathing adequately.

The final designs are still being hashed out (Emerson has produced five iterations so far). Once they get the current prototype finalized, they plan to design a two-bird holder, something that would save a lot of time and money. So far, Lattin says she’s very impressed with what she’s seen.

“Before, when the bird was wrapped up in gauze, I would be trying to look at their tail sticking out at the bottom, and be like ‘Uh, I just saw it move, so I think it’s OK,’” she says. “I haven’t had to do that at all with the new bird holder because you can see their breathing so well. You can turn the anesthesia down when their breathing gets pretty slow, or you can turn it up if the breathing is faster. It’s just so much better.”