“Bioorthogonal chemistry is literally chemistry for life,” said Carolyn Bertozzi, an internationally acclaimed leader and founder of this emerging and highly promising field of science that could fundamentally change drug development and disease diagnostics. In delivering the Kavli Foundation Innovations in Chemistry Lecture at this year’s Spring Meeting of the American Chemical Society (ACS) in San Diego, Bertozzi described how her own ground-breaking research made use of experiments nearly a century ago by two German chemists whose work was driven primarily by scientific curiosity as opposed to the more problem-driven research of today.

Bertozzi is a senior faculty scientist with the Lawrence Berkeley National Laboratory (Berkeley Lab) and the T.Z. and Irmgard Chu Distinguished Professor of Chemistry and Professor of Molecular and Cell Biology at the University of California (UC) Berkeley. She is also an investigator with the Howard Hughes Medical Institute (HHMI). The Kavli Foundation is a philanthropic organization that supports basic scientific research. Its ACS lectures are designed to address “the urgent need for vigorous, outside the box thinking by scientists.”

Bioorthogonal chemistry is the term Bertozzi herself coined nearly a decade ago to describe chemical reactions that can take place inside living systems without interfering with native biochemical processes. Bertozzi has said she developed bioorthogonal chemistry to solve the scientific equivalent of finding a needle in a haystack – singling out one type of biomolecule for analysis from the all the diverse species that populate cells and organisms.

“Bioorthogonal chemistry was launched with the growing realization that the molecular details of biological processes can be most accurately understood by probing biomolecules within their native habitats, that is, in cells, or even better, live organisms,” said Bertozzi. “Bioorthogonal chemistry opens the door to producing active ingredients for medicines within the diseases tissue inside a patient’s body, and to non-invasive in vivo molecular imaging.” 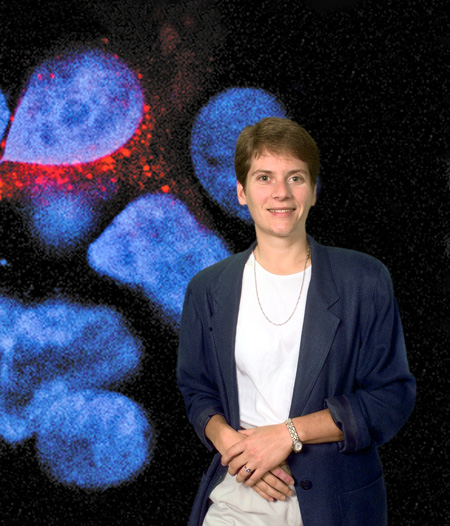 Carolyn Bertozzi is a leading authority on the promising new field of bioorthogonal chemistry, which could fundamentally change drug development and the diagnosis of cancer and other diseases. (Photo by Roy Kaltschmidt, Berkeley Lab)

Bertozzi’s development of bioorthogonal chemistry began in the late 1990s from her scientific interest in glycans, the sugar molecules that are abundant on the surfaces of living cells. Glycans are central to the signaling that takes place between cells during development, and are also involved in bacterial and viral infections, as well as the immune system’s response. Imaging glycans, however, posed a major challenge because unlike proteins, they are not directly programmed by genes, which means they can’t be labeled using standard genetic-based fluorescence techniques. Bertozzi needed to find a way to tag glycans with chemical groups that would only react with a specific glycan of interest and the fluorescing molecule sent to probe that glycan. Furthermore, since the reaction vessel would be a living cell or organism, the reaction had to take place in water under physiological conditions. Also, it was imperative that the reaction not interfere with any other biomolecule or process in a cell or organism.

“It was a pretty restrictive set of boundary conditions that a traditionally trained organic chemist like me never had to work within,” Bertozzi said. “Such reactions are usually performed in very clean, dry test tubes and flasks under conditions that the chemist can control. A living cell or organism, with all its water, proteins, fats, sugars and metabolites is very messy and uncontrollable by comparison.”

Searching the chemistry textbooks for something that was suitably selective and non-interfering, Bertozzi and her colleagues found what they needed in the century-old work of Hermann Staudinger. The Staudinger reaction occurs between an azide, a molecule featuring three nitrogen atoms, and a phosphine, a molecule containing a phosphorus atom. The azide sheds two of its nitrogen atoms, and a compound called an aza-ylide is formed. Though the reaction is “stunningly selective,” Bertozzi said, the aza-ylides fall apart in water. She and her colleagues corrected this liability by adjusting the phosphine component to produce their own reaction, which they called the Staudinger ligation.

“The Staudinger ligation was the first bioorthogonal tool at our disposal,” Bertozzi said. “Owing to the complete absence of azides and phosphines from living systems, neither reacts with biological molecules, but both react rapidly and at high efficiency with each other in water and at room temperature.”

The Staudinger ligation proved particularly powerful for imaging cultured cells after Bertozzi and her colleagues developed “smart” probes, fluorophores that turn on only after they have reacted with the azide reporter in the target glycans. It also proved safe for living systems and was used for tagging glycoproteins in mice. However, the Staudinger ligation was much too slow to capture the action of most of the biological processes involving glycans.

Meanwhile, at the start of this century the “click-chemistry” concept was being developed by Barry Sharpless of the Scripps Research Institute, in which molecules are reacted to rapidly assemble without interference by surrounding functionalities. One of the click-chemistry reactions, the copper-catalyzed addition of azides and alkynes, hydrocarbons that are rare in living systems, is about 25 times faster than the Staudinger ligation and would be excellent for bioorthogonal chemistry except that the copper catalyst is toxic to living systems.

This click chemistry reaction was itself inspired by the 1950s work of Rolf Huisgen, who described the reaction between azides and alkynes as a 1,3-dipolar cycloaddition. In 2008, Bertozzi and her colleagues redesigned this azide-alkyne reaction using a ring-shaped molecule called a cyclooctyne (difluorinated cyclotoctyne or DIFO) to produce a copper-free version of click-chemistry that is safe for living systems.

“This copper-free click reaction of azides and cyclooctynes combines the biocompatibility of the Staudinger ligation with the fast reaction kinetics of click chemistry,” Bertozzi said.

In her Kavli Lecture, Bertozzi described using the copper-free click-chemistry reaction to probe glycan dynamics in living cells, live zebrafish embryos and laboratory mice, widely regarded as the model organism for studying human pathology. Her ultimate goal, she said, is to use it to study human cancers.

“If we can visualize sugars on cancer cells and discriminate between sugars on a normal cell we might be able to detect cancers through imaging techniques or follow the progression of a course of drug therapy to see how the drug is affecting the cancer,” Bertozzi said.

She also envisioned scenarios in which bioorthogonal chemistry techniques could be used to deliver a drug to diseased tissue at the concentrations needed to be effective. For example, with an oral drug that is not absorbed well into the blood through the stomach, physicians might use bioorthogonal chemistry to administer the drug’s constituent molecules so that they reach the diseased tissue then recombine into the actual drug for treatment.

In acknowledging the debt of bioorthogonal chemistry to past curiosity-driven research, Bertozzi took a moment to note the dwindling resources and opportunities for scientific inquiries that are not problem-driven.

“Without some curiosity-driven research we won’t leave much of a legacy for the next generation of scientists,” she said.