Evidence Suggests California’s Drought is the Worst in 1,200 Years

As California finally experiences the arrival of a rain-bearing Pineapple Express this week, two climate scientists from the University of Minnesota and Woods Hole Oceanographic Institution have shown that the drought of 2012-2014 has been the worst in 1,200 years.

Daniel Griffin, an assistant professor in the Department of Geography, Environment and Society at the University of Minnesota, and Kevin Anchukaitis, an assistant scientist at Woods Hole Oceanographic Institution, asked the question, “How unusual is the ongoing California drought?”  Watching the severity of the California drought intensify since last autumn, they wondered how it would eventually compare to other extreme droughts throughout the state’s history. 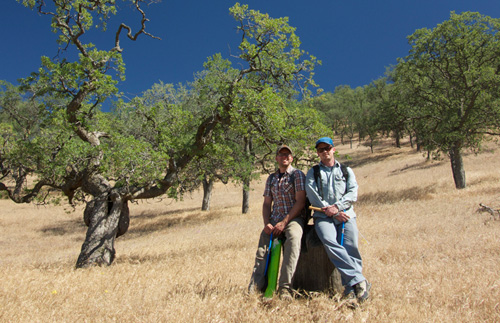 Research by WHOI paleoclimatologist Kevin Anchukaitis, left, and Univ. of Minnesota Assistant Professor Dan Griffin has shown that the drought of 2012-2014 has been the worst in 1,200 years. They used tree-rings from centuries-old blue oak like the one pictured to provide long-term context for the ongoing California drought. (Photo by Megan Lundin, Wind Wolves Preserve, Bakersfield, CA)

To answer those questions, Griffin and Anchukaitis collected new tree-ring samples from blue oak trees in southern and central California. “California’s old blue oaks are as close to nature’s rain gauges as we get,” says Griffin. “They thrive in some of the driest environments where trees can grow in California.” These trees are particularly sensitive to moisture changes and their tree rings display moisture fluctuations vividly.

As soon as the National Oceanic and Atmospheric Administration (NOAA) released climate data for the summer of 2014, the two scientists sprang into action. Using their blue oak data, they reconstructed rainfall back to the 13th century.  They also calculated the severity of the drought by combining NOAA’s estimates of the Palmer Drought Severity Index (PDSI), an index of soil moisture variability, with the existing North American Drought Atlas, a spatial tree-ring based reconstruction of drought developed by scientists at Columbia University’s Lamont-Doherty Earth Observatory. These resources together provided complementary data on rainfall and soil moisture over the past millennium. Griffin and Anchukaitis found that while the current period of low precipitation is not unusual in California’s history, these rainfall deficits combined with sustained record high temperatures created the current multiyear severe water shortages.  “While it is precipitation that sets the rhythm of California drought, temperature weighs in on the pitch,” says Anchukaitis. 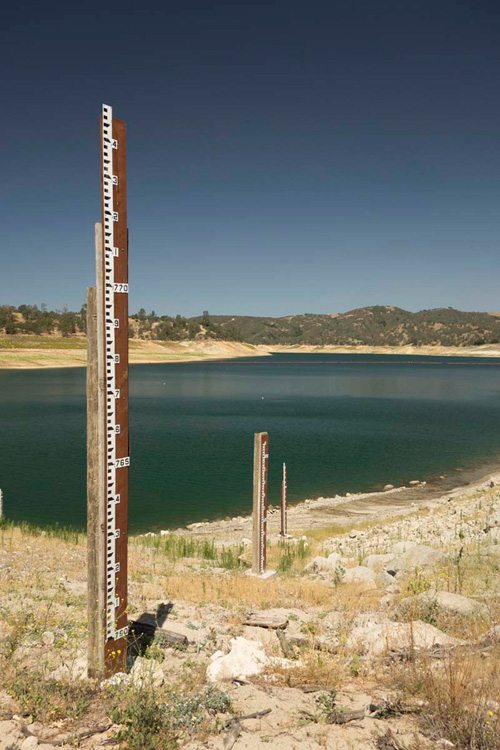 The 2012-2014 California drought, unusual in the context of the last 1,200 years, greatly diminished water reserves in Lake Nacimiento of the upper Salinas Valley. (Photo by Daniel Griffin)

“We were genuinely surprised at the result,” says Griffin, a NOAA Climate & Global Change Fellow and former WHOI postdoctoral scholar. “This is California–drought happens. Time and again, the most common result in tree-ring studies is that drought episodes in the past were more extreme than those of more recent eras.  This time, however, the result was different.” While there is good evidence of past sustained, multi-decadal droughts or so-called “megadroughts”’ in California, the authors say those past episodes were probably punctuated by occasional wet years, even if the cumulative effect over decades was one of overall drying.  The current short-term drought appears to be worse than any previous span of consecutive years of drought without reprieve.

Tree rings are a valuable data source when tracking historical climate, weather and natural disaster trends. Floods, fires, drought and other elements that can affect growing conditions are reflected in the development of tree rings, and since each ring represents one year the samples collected from centuries-old trees are a virtual timeline that extend beyond the historical record in North America.

So what are the implications? The research indicates that natural climate system variability is compounded by human-caused climate change and that “hot” droughts such as the current one are likely to occur again in the future. California is the world’s 8th largest economy and the source of a substantial amount of U.S. produce. Surface water supply shortages there have impacts well beyond the state’s borders. 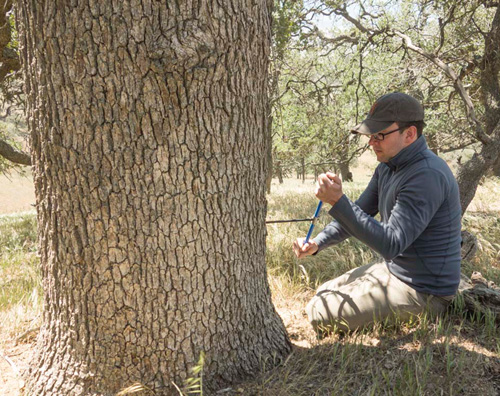 WHOI paleoclimatologist Kevin Anchukaitis collects a tree-ring sample from a 300-year old blue oak in California. Griffin and Anchukaitis found that while the current period of low precipitation is not unusual in California’s history, these rainfall deficits combined with sustained record high temperatures created the current multiyear severe water shortages. “While it is precipitation that sets the rhythm of California drought, temperature weighs in on the pitch,” says Anchukaitis. (Photo by Dan Griffin)

With an exceptionally wet winter, parts of California might emerge from the drought this year.  “But there is no doubt,” cautions Anchukaitis, “that we are entering a new era where human-wrought changes to the climate system will become important for determining the severity of droughts and their consequences for coupled human and natural systems.”

The results of their study are published in Geophysical Research Letters in the article, “How unusual is the 2012-2014 California Drought?”