Fuel cell technology has attracted a lot of attention recently for its potential to revolutionize the transportation sector by decreasing our use of fossil fuels and reducing emissions that contribute to climate change.

But it turns out that the same technology can also be used in heating, ventilation and air conditioning (HVAC) applications, which account for about half of the energy use in a typical U.S. home.

The company credits the University of Delaware’s Ajay Prasad and his team with playing an important role in the breakthrough.

“When Xergy approached us to collaborate on this idea, we recognized that electrochemical compressors [ECCs] are very similar to fuel cells,” says Prasad, who directs UD’s Center for Fuel Cell Research. “For example, ECCs employ many of the same components, including an ion-exchange membrane, gas diffusion layers, bipolar plates and catalysts.”

However, there are some key differences that pose challenges in transitioning this technology to HVAC applications. 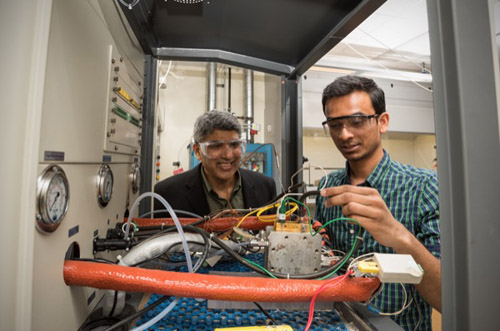 Ajay Prasad (left) and Ashish Chouhan are conducting research on an innovative refrigeration system based on electrochemical compression. Photo by Kathy F. Atkinson

Graduate student Ashish Chouhan, who is working with Prasad to address these challenges, explains that traditional ion-exchange membranes must be highly hydrated in order to permit proton conduction. However, Xergy’s design, which employs metal hydride heat exchangers, must be moisture free, as water can seriously degrade the metal hydride beds.

“We are testing various membrane and catalyst layer formulations that will pump hydrogen effectively in the complete absence of water,” Chouhan says. “We have tested several ion-exchange membranes and are now focused on membranes made from a high-performance polymer called polybenzimidazole for this task.”

Initial applications for the technology include hybrid water heaters and air conditioners — the top two energy-consuming appliances in homes. Unlike existing systems, ECC’s are extremely efficient and quiet because they have no moving parts, and, even more important, they allow the use of environmentally friendly refrigerants.

“It’s no longer a matter of if, but when, this technology will enter the market,” said Xergy president Bamdad Bahar in announcing the breakthrough.

“We’ve proven that refrigeration systems based on electrochemical compression are a viable alternative. Now it’s just a matter of refinement to get the package smaller and cheaper so that it can see widespread adoption in a wide variety of appliances for global markets.”

Once the technology has been refined, Xergy plans to expand ECC applications to other markets, including home and commercial air conditioners, refrigeration systems, and numerous other heating and cooling applications.

“This technology has the potential to transform refrigeration systems worldwide and bring about significant environmental benefits,” says Prasad. “Improvements in HVAC system efficiencies will greatly reduce the electricity demand from power plants leading to reductions in greenhouse gas emissions.”

“In addition, widespread adoption of ECCs will bypass the 150 million electric motors that are required to drive mechanical compressors, which will reduce our dependence on critical raw materials that go into electric motors. Finally, ECCs do not require CFC-based refrigerants, which will help to protect and preserve the ozone layer.”

About the Team and the Project

Ajay Prasad is the College of Engineering Alumni Distinguished Professor in the Department of Mechanical Engineering and director of the Center for Fuel Cell Research at the University of Delaware. Ashish Chouhan is a doctoral student in mechanical engineering at UD.

The Center for Fuel Cell Research conducts fundamental research on fuel cell and hydrogen infrastructure science and technology to improve performance and durability with novel materials, architectures and operating strategies, while enabling commercialization with technology transfer to industry. The center also conducts public outreach to educate the community about the benefits of fuel cells.

Xergy Inc. is a high-technology start-up venture based in Sussex County, Delaware, with over 30 patents in process. It has entered into programs to commercialize this technology with a number of large global companies.

After starting up in 2010, Xergy Inc. won the GE Ecomagination award in 2011, was a finalist in the Clean-tech Award in 2012, and won a Department of Energy SBIR Phase I award in 2013 and a Phase II award in 2014. In 2015, Xergy delivered its first prototype electrochemical compressor to its commercial partner.

The research was funded through the U.S. Department of Energy.