Kakani Katija, a postdoctoral scholar at Woods Hole Oceanographic Institution (WHOI), has been selected as one of 14 National Geographic Emerging Explorers for 2011 for her investigation into the role swimming animals might play in mixing and moving the oceans and other large bodies of water.

National Geographic’s Emerging Explorers Program recognizes and supports uniquely gifted and inspiring adventurers, scientists and storytellers making a significant contribution to world knowledge through exploration while still early in their careers. The Emerging Explorers each receive a $10,000 award to assist with research and to aid further exploration. The program is made possible in part by the Catherine B. Reynolds Foundation, which has supported the program since its inception in 2004.

“I’m very excited,” said Katija, who came to WHOI in September 2010. “They told me I was selected in January. I had no idea I was even considered for it.”

Katija’s research in the field of biogenic ocean mixing focuses on the power sources that propel the motion of oceans. Winds and tides have long been known to drive ocean currents, which in turn affect weather patterns around the world. But as Katija’s evidence increasingly shows, the movements of sea creatures, from tiny to large, could have an equally powerful effect. “The creatures in our seas could be as important to ocean circulation and global climate as the winds and tides,” she said. 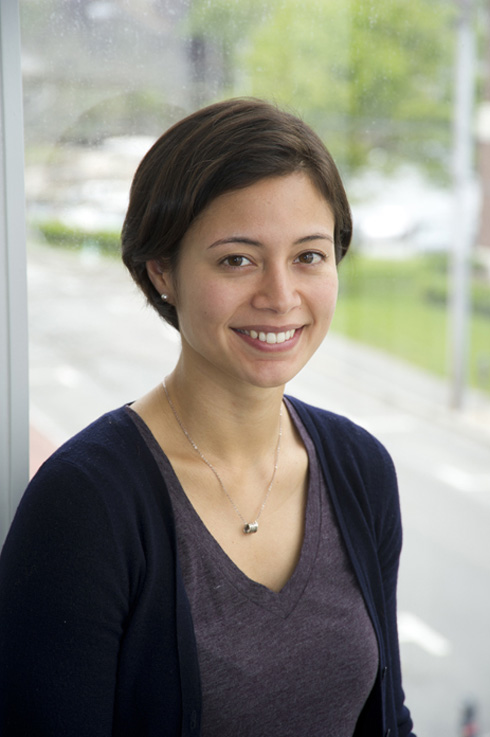 Kakani Katija is one of 14 scientists selected for the National Geographic Emerging Explorers award for 2011. Photo by Tom Kleindinst, Woods Hole Ocanographic Institution

She has identified a mechanism that would allow swimming animals to mix water when they swim. Now she plans to test that mechanism, first with multiple animals in a controlled lab environment and then in the open ocean. She has submitted internal WHOI proposals to pursue the initial phases of this work, and says she then hopes to apply to the National Science Foundation for the later research.

Preliminary lab results show that swarms of tiny krill or copepods may in fact have the greatest potential of all to mix fluids. “We want to know where these big populations are located, how they act together to shape mixing, and what happens when whole populations migrate simultaneously in the same direction,” she said in a National Geographic profile article. 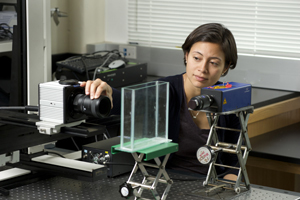 Kakani Katija in lab, where she studies how the swimming behavior of animals might affect the mixing and movement of water. Photo by Tom Kleindinst, Woods Hole Oceanographic Institution

Katija will join the other Emerging Explorers in June at the Explorers Symposium at National Geographic in Washington, D.C., where she says she has been selected to speak at the Frontiers of Science symposium. She says she will discuss biogenic mixing and “bringing engineering diagnostic techniques into oceanographic applications.”

The new Emerging Explorers are introduced in the June 2011 issue of National Geographic magazine.

National Geographic Emerging Explorers may be selected from virtually any field, including anthropology, archaeology, photography, space exploration, earth sciences, mountaineering and cartography to the worlds of technology, music and filmmaking.

“National Geographic’s mission is to inspire people to care about the planet, and our Emerging Explorers are outstanding young leaders whose endeavors further this mission. We are pleased to support them as they set out on promising careers. They are innovators in their respective fields and represent tomorrow’s Edmund Hillarys, Jacques Cousteaus and Dian Fosseys,” said Terry Garcia, National Geographic’s executive vice president for Mission Programs.