Bacteria in a drop of water spontaneously form a bi-directional vortex, with bacteria near the center of the drop swimming in the opposite direction of bacteria swimming near the edge. New computer simulations, confirmed by a novel experiment, explain how that vortex comes to be.

PROVIDENCE, R.I. [Brown University] — When a bunch of B. subtilis bacteria are confined within a droplet of water, a very strange thing happens. The chaotic motion of all those individual swimmers spontaneously organizes into a swirling vortex, with bacteria on the outer edge of the droplet moving in one direction while those on the inside move the opposite direction.

Researchers from Brown University and the University of Cambridge have explained for the first time how that dual-motion vortex is generated. Using computer modeling and a clever experiment, the researchers show that the fluid flow generated by all those tiny swimmers explains that strange two-way motion.

The research is published in Proceedings of the National Academy of Sciences. 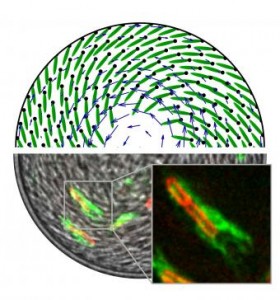 A mysterious vortex in theory and observation. Dyes of different colors on the bodies and flagella of bacteria allowed researchers to determine the direction of their swimming. Direct observation confirmed a computer simulation of bacteria swimming in opposite directions within a water drop. Image credit: Brown University and Cambridge University

Hugo Wioland and and others in the lab of Raymond Goldstein at Cambridge first demonstrated the phenomenon experimentally in 2013. But at that time, the dynamics of the system — especially the two-directional motion — weren’t fully understood. Enkeleida Lushi, now a postdoctoral researcher in Brown’s School of Engineering and an expert in theoretical modeling, started thinking about this problem while at Cambridge on a fellowship last year.

“These are very simple organisms,” Lushi said. “They do not consciously decide where to go and how to organize. Most of the dynamics occur just due to physical mechanisms, like collisions with each other and the boundary. But there was no intuitive way to explain what was happening with the dual-motion vortex. It was very puzzling.”

The initial model attempting to reproduce the phenomenon focused on the mechanical interactions between individual bacteria. Those simulations showed that when individuals swimming in random trajectories start bumping into each other in a confined circular space, they tend to orient each other to the same angle relative to the circular boundary. That helps explain how a coordinated motion starts, but can’t explain why individuals toward the outside of the circle move in the opposite direction from those on the inside.

That part of the phenomenon, it turns out, is a matter of fluid flow.

“These bacteria are only a few micrometers long,” Lushi said. “At that scale, the fluid flow to them feels very viscous — very different from what we experience in air or even in water. The effect is that any movement that the bacteria make causes disturbances in the flow that will be felt strongly by their neighbors.”

So Lushi and her colleagues developed a computer simulation that included the fluid flows created when the bacteria swim. B. subtilis swim by turning tiny corkscrew-like appendages called flagella. The flagellar bundle pushes against the fluid, which propels the bacteria forward and pushes the fluid in the opposite direction.

When Lushi included those dynamics in her simulation, the source of the two-way motion became clear. The bacteria all tend to align themselves facing in the same direction, the simulation showed. But individuals swimming along the outside of the circle created a flow in the fluid in the opposite direction from the direction they’re swimming. Bacteria toward the inside of the circle are forced to swim against that flow, but can’t quite keep up. They end up moving in the same direction as the flow — the opposite direction of the swimmers on the outside.

A computer simulates the bacterial vortex. The corkscrew swimming motion of bacteria near the edge of a water droplet creates a jet-like exhaust stream. Bacteria toward the center cannot overcome that stream and are swept along by the flow — in the opposite direction.

And in the real world ….Bacteria swimming in a water droplet behave almost exactly as the computer simulation predicted. Researchers used a system of dyes to determine which way the bacteria were headed.

To confirm the model, the researchers set up an experiment with real bacteria, using colored dyes on the bacterium body and flagella to determine which direction the bacteria were facing. The experiment showed that all the bacteria were indeed attempting to swim in the same direction. But those in the middle were swept backward, apparently by the fluid flow created along the outside. It was just as the model had predicted.

“It’s a very basic model,” Lushi said, “but in the end it captures this phenomenon very well. It showed that any study of microbes suspended in a liquid should not ignore the motion of that liquid – it could have important repercussions on the microbes.”

So why study the strange motion of bacteria in a water drop?

“We want to understand nature where there are many incidences of independent individual units organizing collectively — this bacterial vortex is but one example,” Lushi said. “But also, we might want to eventually control bacterial colonies, for example to limit their spread. The more we understand how they interact and how they move collectively, the better we can devise ways to control their motion.”