Twenty years ago this week, in the predawn darkness of Jan. 17, 1994, at five seconds before 4:31 a.m. PST, the ground ruptured violently on a blind thrust fault (a crack in Earth’s crust that does not reach the surface) about 11 miles (18 kilometers) beneath Reseda, in California’s San Fernando Valley about 20 miles (31 kilometers) northwest of downtown Los Angeles. The resulting magnitude 6.7 earthquake, known as the Northridge earthquake, became the first large quake to strike directly under an urban area in the United States since the 1933 magnitude 6.4 earthquake in Long Beach, Calif.

The initial fault rupture lasted just 8 seconds, but for many of the millions of Southern Californians and people as far away as Las Vegas, Northern California, Utah and Baja California, it felt like an eternity. In fact, the quake’s seismic waves were amplified and reverberated through the region’s complex mix of faults, sediments and mountains, so the shaking lasted as long as 30 seconds in some areas. At its peak a few miles from the epicenter, the ground shook at 1.8 times the force of gravity – strong enough to throw objects of any size into the air.

By the time the dust settled, dozens of people had been killed, many thousands injured and tens of thousands left homeless (estimates of each vary). The region suffered approximately $49 billion in property damage and economic losses – the most expensive natural disaster in the United States until Hurricane Katrina. Had it not been for the early hour of the quake and the fact that it happened on the Martin Luther King, Jr. holiday, the death and injury toll would likely have been significantly higher. 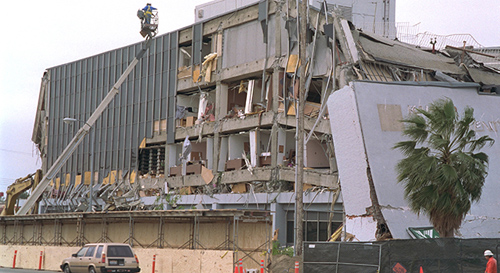 We asked geophysicist Andrea Donnellan of NASA’s Jet Propulsion Laboratory, Pasadena, Calif., to reflect on the Northridge earthquake, what we’ve learned about earthquakes since then, our state of preparedness for the next “big one” and what lies ahead for earthquake studies at NASA.

Q: What progress have we made in understanding earthquakes in the 20 years since Northridge?

Q: Are we more or less prepared for a large quake in the Los Angeles area than we were 20 years ago?

As a whole, we are better prepared for earthquakes in Los Angeles today due to retrofitting and improved building codes. California’s periodic ShakeOut and Golden Guardian exercises serve as effective simulations for responding to real earthquake emergencies. We have not had a damaging earthquake in a long time, however, and it is easy for people to become complacent following a long period of quiescence.

Q: How have earthquake risks changed in Southern California over the past two decades? Which areas are most at risk for the next large earthquake here?

Q: Are we any closer to being able to forecast earthquakes than we were 20 years ago? Do you think we’ll ever be able to predict earthquakes?

Better networks, improved data analyses, measurement of crustal deformation and better models are improving our ability to forecast the probability of earthquakes on timescales of years to decades. Earthquake prediction on short-time scales remains elusive, however. Earthquakes generally originate at great depths, making detection of any precursory process difficult.

Q: What do you think was the legacy of the Northridge quake?

The Northridge earthquake certainly resulted in better earthquake building codes. For NASA, the earthquake also highlighted the value of using crustal deformation Global Positioning System (GPS) networks to study earthquakes. The earthquake resulted in the formation of the Southern California Integrated GPS Network, which, in turn, led to the Plate Boundary Observatory (https://pbo.unavco.org/). Results, showing the motion of tectonic plates and providing a high level of detail of motion associated with earthquake faults, are used for science and are being incorporated into earthquake hazard maps.

Q: How did the Northridge quake affect you personally?

The Northridge earthquake occurred on a fault that we had just modeled based on GPS results of the region. We published a paper on that region in Nature magazine in November 1993, and the earthquake occurred a couple of months later. While we discussed the size earthquake the fault could produce, which it did, we did not put a timeframe on the possible earthquake. Nevertheless, the event highlighted the value of using NASA geodetic imaging techniques to study the quiet motions of strain accumulation that occur before earthquakes and to provide insight into what is going on at depth. We also continued the work after the earthquake and showed that the fault continued to slip, mostly quietly, in the two years following the earthquake. The earthquake allowed us to develop continuous GPS networks, radar, and software programs to better understand earthquakes and how earthquake faults behave. The earthquake reminds me to be prepared on a personal level and has allowed me to work with exciting technology and a truly exceptional team of scientists and engineers.

Q: What got you interested in this line of research?

I love to be able to measure how things move and use those results to understand what is going on underneath Earth’s surface. I like technology, working on computers, and getting out in the field, which this line of work allows. I started out measuring motions of ice sheets and glaciers. As the technology has improved, we’ve been able to measure smaller motions. So, when I went to graduate school, I was able to measure motions of the ground associated with faults in Southern California.

Q: What earthquake research are you currently involved in?

I use geodetic imaging, developed largely by NASA, to study motions associated with plate tectonics and earthquakes. Techniques I use in particular are GPS and NASA’s Uninhabited Aerial Vehicle Synthetic Aperture Radar (UAVSAR). From these measurements, we obtain details of how Earth’s surface moves over time before, during and after earthquakes. The results are analyzed and modeled using a suite of software tools.

Q: Is there any new mission on the horizon at NASA for studying earthquakes?

I am looking forward to the NASA-Indian Space Research Organisation (ISRO) Synthetic Aperture Radar mission that is now being planned to provide geodetic imaging data on a global scale. This spaceborne radar mission will allow us to study fault motions globally, which will enable us to more quickly understand earthquake processes overall. The mission will also assist in responding to earthquakes by assessing damage following earthquake events and will forecast aftershock probabilities based on ground motions following the rupture of earthquake faults.