With a goal to reduce HIV risk behaviors, researchers investigated whether gay men and male sex workers in Mexico City would participate in a conditional cash transfer program that encourages HIV prevention education and regular testing. A new study in the European Journal of Health Economics reports the price that would get more than 75-percent participation: $288 a year.

PROVIDENCE, R.I. [Brown University] — Studies have found that conditional cash transfer programs, in which governments pay citizens if they consistently practice societally beneficial behaviors, have improved pediatric health care and education in Mexico, increased HIV testing in Malawi, and reduced sexually transmitted infections in Tanzania. Public health researchers therefore investigated whether the idea could be applied to HIV risk behaviors among gay men and male sex workers in Mexico City. A new study reports not only that some members of those populations would change behavior for conditional cash payments, but the exact prices they would accept.

“We’re trying to prevent HIV from spreading and we are trying to save money,” said public health economist Omar Galárraga, assistant professor of health services policy and practice and lead author of the study published in the European Journal of Health Economics. “We want to make sure that every dollar spent has the greatest impact.” 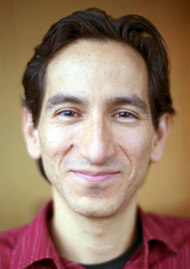 Omar Galárraga. “We’re trying to prevent HIV from spreading and we are trying to save money.” Image credit: Brown University

In Mexico, like many other Western nations, the HIV epidemic is especially concentrated within certain populations. Among the capital city’s young gay men and male sex workers, the estimated prevalence of HIV infection is about 20 and 30 percent respectively. The Mexican government’s health care policy, meanwhile, offers universal access to HIV therapy, which costs $5,000 to $7,000 a year.

Through detailed questionnaires administered to 1,745 gay men 18-25 years of age, Galárraga and his colleagues in Mexico’s Institute for Public Health (INSP) found that at a rate of $288 a year, more than three-quarters of the men would attend monthly prevention talks, engage in testing for sexually transmitted infections, and pledge to stay free of STI’s with testing to verify that. To obtain a similar level of participation among the 5.1 percent of the sample who were male sex workers, the price was much lower: $156 a year.

The study therefore gives policymakers a specific prediction of how much a program would cost to have high participation, and how much money — and how many lives — it might save.

“The target population seems generally very well-disposed to participate in these types of programs at prices which are consistent with other social programs currently in place in Mexico for preventing other health risks,” Galárraga said.

Men on the street

To gather the large sampling of data, the researchers recruited and trained young members of Mexico City’s gay community in 2008 to present the surveys to their peers in discotheques, metro stations, bars, and streets in the city’s red-light district. The interviewers briefly explained that they were conducting a survey about HIV risk behaviors and ways to reduce infection.

Consenting subjects were then given a handheld computer with software that administered the confidential and anonymous 40-minute survey. The intentionally discreet technique, Galárraga said, allowed the survey process to appear as if each subject was simply using a cell phone.

The survey software asked subjects about personal traits, risk behaviors, such as the number of recent sex partners and condom use, and health, and then took them through a bidding and bargaining exercise in which they ultimately declared the level of payment they’d accept for participating in either or both of two programs: monthly talks about HIV prevention and STI testing and quarterly check-ins to verify a pledge of remaining STI free.

Monitoring for STIs, Galárraga said, is a proxy for monitoring HIV risk behaviors.

“You want to condition on something you can observe,” Galárraga said. “The ultimate goal is to reduce the number of sex partners and to increase the use of condoms — to increase safe sex — but that cannot be observed directly. A reduction in the incidence of STI’s is correlated with the ultimate goal.”

The data show that there is an optimal price for a conditional cash transfer program. Just for the monthly prevention talks and tests, for example, the percentage of men who would participate rapidly climbed above 75 percent as offers reached between $7 and $8.75 a month. But participation only inched up a little closer to 80 percent when offers were raised as high as $12.25 a month. Above $12.25 the potential participation rate even started to decline a little.

The result that sex workers would participate for much less money may be a result of their especially urgent need for money, Galárraga said. It is still a complex calculation for them, however, because the workers generally can earn more money for engaging in riskier behavior, for instance by not using condoms. On short-term financial basis, therefore, sex workers incur a penalty for doing what seems to be the right thing from personal and public health standpoint. For them, conditional cash payments can provide at least some compensation for making the healthier choices.

The data yielded other insights, including that about 9 percent of the men would not participate at any price. They tended to be more educated and wealthier.

Since obtaining the results, the researchers have continued their work by implementing a small pilot conditional cash transfer program with about 200 male sex workers and gay men with more than 10 partners a month, Galárraga said. The team does not yet have definitive results to report.

The stakes of the research, however, are high as the epidemic continues on the streets of Mexico’s capital.

In addition to Galárraga, other authors are Sandra G. Sosa-Rubí and Cesar Infante of INSP; Stefano M. Bertozzi of the Bill and Melinda Gates Foundation; and Paul J. Gertler of the University of California–Berkeley, where the project began before Galárraga left Berkeley for Brown in 2010.

The National Institutes of Health (grant: K01-TW008016-04) and the Mexican National Center for HIV/AIDS Control and Prevention (CENSIDA) provided funding for the study.