Sperm cell release can be triggered by tightening the grip around the delivery organ, according to a team of nano and microsystems engineers and plant biologists at the University of Montreal and Concordia University. Concordia’s nanobiotech team devised a microchip that enabled the University of Montreal biologists to observe what happened when pollen tubes – the sperm delivery tools used by plants – tried to negotiate a microscopic obstacle course. The pollen tubes were exposed to a series of narrow, elastic openings resulting in a variety of cellular responses. When the opening was too narrow or tight, pollen tube growth stalled. However, the elongating tubes successfully penetrated slightly larger openings. Curiously, the pollen tubes burst and released the sperm cells when passing openings of a particular size relative to the pollen tube width.

The microchip was designed to imitate the mechanical challenges that the female flower tissues place in the path of the rapidly growing pollen tube on its way to the egg cell. Unlike its human counterpart, a microscopic single-cell organ undertakes sperm delivery in plants: a cylindrical protuberance formed by the male gametophyte, the pollen grain. “Similarly to elongated human cells such as neurons, the pollen tubes are tip growing cells that invade other tissues, in this case those of the female flower organs. Unlike those found in humans or other animals, the invasive ability of tip growing cells in plants remain largely unexplored. Our goal was to address this lack of knowledge using pollen tubes, whose invasive life style is the fundamental underpinning of sexual reproduction in flowering plants,” said senior co-author Anja Geitmann of the University of Montreal. “Since they are encased in a stiff cellular envelope, plant cells grow and invade differently from animal cells,” explained Concordia University senior co-author Muthukumaran Packirisamy. “From a mechanical point of view, the process of pollen tube elongation is similar to that of a balloon catheter used for angioplasty – forces are generated based on the principle of a hydroskeleton, or fluid under pressure. We designed microchannels through which the pollen tubes had to forcefully squeeze in order to continue their elongation.” 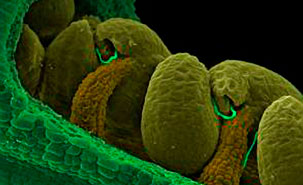 Inside of the pistil of an Arabidopsis flower revealing the ovules being fertilized by pollen tubes (thin green lines). Image credit: University of Montreal

Microsystems technology was required to undertake this experiment due to the tiny size of pollen tubes and the consequently minute amount of force they exert to accomplish penetration. The pollen tube requires not only an invasive force to overcome the mechanical resistance of the surrounding tissue, but also the protection of the contents that is to be transported, the sperm cells, of which there are exactly two in each tube. It is crucial that the pollen tube remains tubular while winding its way through the pistil, since kinks and collapses of this catheter-like organ prevent the passage of the sperm cells, similar to a blockage in a twisted garden hose. A typical pollen tube can become many centimeters long but is only between 5 and 20 micrometres wide. By way of comparison, a human hair is typically 100 micrometres thick. “To fit the dimensions of this cell, we had to design the microchip with microscopic channels and obstacles that are narrower than the pollen tubes. We used high resolution soft and direct write lithography techniques to produce this micron-sized obstacle course. Furthermore, measuring the pressure that pollen tubes exert requires materials that are just the right consistency – not too hard and not too soft. We chose an elastic polymer material, and as the tubes deformed the material at some levels of tightness, we can be certain that the softness was just right. Mechanical modeling  allowed us to calculate the forces exerted by these cells. Lab-on-a-Chip (LOC) technology allows us to assess cellular behavior much better than the conventional Petri dish,” Packirisamy said.

Sexual reproduction in plants is in many ways analogous to human biology. “In order to find its path to the ovule and the egg cell, the pollen tube has to invade a series of female tissues in the receptive flower,” Geitmann explained. “The male and the female organs continuously communicate during the process. The female aids the process by lubricating the path, but the male exerts significant force to overcome any residual resistance.” The pollen tube must penetrate through a central canal that connects the stigma, or pollen landing platform, to the ovary, the organ that houses the ovules. Upon reaching the ovary, it then passes onto the internal surface of the placenta, finds and enters the opening in the ovule, and finally bursts open when connecting with the egg cell, enabling its fertilization by one of the two sperm cells it delivers. The other sperm cell fertilizes another cell of the female gametophyte to give rise to a tissue that nourishes the growing embryo.

How the timely discharge of the sperm cells is triggered in plants has essentially been unknown. The control of this process is crucial for successful fertilization and seed set, since plant sperm is not motile and must therefore be delivered precisely to its target. A precocious discharge (before the pollen tube reaches the ovule) will not allow the sperm cells to reach the egg, whereas on the other hand, a failure to discharge equally precludes fertilization. “Our findings show that a tight grip around the tube does result in sperm release. This illustrates that plant cells perceive and respond to mechanical stimuli,” Geitmann said. “However, the particularities of the cellular responses we observed suggest that other factors, such as protein-based signals, are likely to be in play.” The researchers believe that these particularities and the mechanisms that control pollen tube diameter and growth behavior warrant further research. “We’re still not sure exactly what causes the sperm cell release from the pollen tube in vivo, but a mechanical trigger might be part of the signaling mechanism,” Packirisamy said.