Candidates require follow-up observations to verify they are actual planets. Kepler also found six confirmed planets orbiting a sun-like star, Kepler-11. This is the largest group of transiting planets orbiting a single star yet discovered outside our solar system.

“In one generation we have gone from extraterrestrial planets being a mainstay of science fiction, to the present, where Kepler has helped turn science fiction into today’s reality,” said NASA Administrator Charles Bolden. “These discoveries underscore the importance of NASA’s science missions, which consistently increase understanding of our place in the cosmos.” 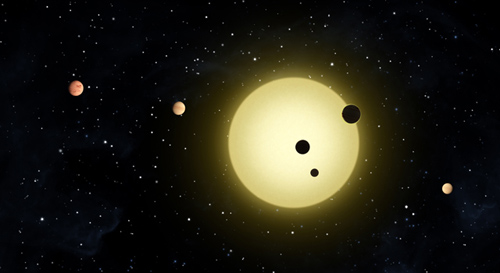 The discoveries are part of several hundred new planet candidates identified in new Kepler mission science data, released on Tuesday, Feb. 1. The findings increase the number of planet candidates identified by Kepler to-date to 1,235. Of these, 68 are approximately Earth-size; 288 are super-Earth-size; 662 are Neptune-size; 165 are the size of Jupiter and 19 are larger than Jupiter. Of the 54 new planet candidates found in the habitable zone, five are near Earth-sized. The remaining 49 habitable zone candidates range from super-Earth size — up to twice the size of Earth — to larger than Jupiter.

The findings are based on the results of observations conducted May 12 to Sept. 17, 2009, of more than 156,000 stars in Kepler’s field of view, which covers approximately one four-hundredth of the sky.

“The fact that we’ve found so many planet candidates in such a tiny fraction of the sky suggests there are countless planets orbiting sun-like stars in our galaxy,” said William Borucki of NASA’s Ames Research Center in Moffett Field, Calif., the mission’s science principal investigator. “We went from zero to 68 Earth-sized planet candidates and zero to 54 candidates in the habitable zone, some of which could have moons with liquid water.”

Among the stars with planetary candidates, 170 show evidence of multiple planetary candidates. Kepler-11, located approximately 2,000 light years from Earth, is the most tightly packed planetary system yet discovered. All six of its confirmed planets have orbits smaller than Venus, and five of the six have orbits smaller than Mercury’s. The only other star with more than one confirmed transiting planet is Kepler-9, which has three. The Kepler-11 findings will be published in the Feb. 3 issue of the journal Nature.

“Kepler-11 is a remarkable system whose architecture and dynamics provide clues about its formation,” said Jack Lissauer, a planetary scientist and Kepler science team member at Ames. “These six planets are mixtures of rock and gases, possibly including water. The rocky material accounts for most of the planets’ mass, while the gas takes up most of their volume. By measuring the sizes and masses of the five inner planets, we determined they are among the lowest-mass confirmed planets beyond our solar system.”

The planets Kepler-11d, Kepler-11e and Kepler-11f have a significant amount of light gas, which indicates that they formed within a few million years of the system’s formation.

“The historic milestones Kepler makes with each new discovery will determine the course of every exoplanet mission to follow,” said Douglas Hudgins, Kepler program scientist at NASA Headquarters in Washington.

Kepler, a space telescope, looks for planet signatures by measuring tiny decreases in the brightness of stars caused by planets crossing in front of them. This is known as a transit. Since transits of planets in the habitable zone of sun-like stars occur about once a year and require three transits for verification, it is expected to take three years to locate and verify Earth-size planets orbiting sun-like stars.

The Kepler science team uses ground-based telescopes and NASA’s Spitzer Space Telescope to review observations on planetary candidates and other objects of interest the spacecraft finds. The star field that Kepler observes in the constellations Cygnus and Lyra can only be seen from ground-based observatories in spring through early fall. The data from these other observations help determine which candidates can be validated as planets.

For more information about the Kepler mission, visit: