From allowing our eyes to see, to enabling green plants to harvest energy from the sun, photochemical reactions – reactions triggered by light – are both ubiquitous and critical to nature. Photochemical reactions also play essential roles in high technology, from the creation of new nanomaterials to the development of more efficient solar energy systems. Using photochemical reactions to our best advantage requires a deep understanding of the interplay between the electrons and atomic nuclei within a molecular system after that system has been excited by light. A major advance towards acquiring this knowledge has been reported by a team of researchers with the U.S. Department of Energy (DOE)’s Lawrence Berkeley National Laboratory (Berkeley Lab) and the University of California (UC) Berkeley.

Graham Fleming, UC Berkeley’s Vice Chancellor for Research, a faculty senior scientist with Berkeley Lab’s Physical Biosciences Division, and member of the Kavli Energy NanoSciences Institute at Berkeley, led the development of a new experimental technique called two-dimensional electronic-vibrational spectroscopy (2D-EV). By combining the advantages of two well-established spectroscopy technologies – 2D-electronic and 2D-infrared – this technique is the first that can be used to simultaneously monitor electronic and molecular dynamics on a femtosecond (millionth of a billionth of a second) time-scale. The results show how the coupling of electronic states and nuclear vibrations affect the outcome of photochemical reactions. 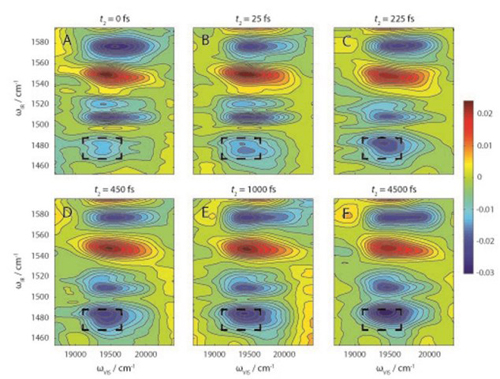 2D-EV spectral data tells researchers how photoexcitation of a molecular system affects the coupling of electronic and nuclear vibrations that is essential to understanding how the system functions. Image credit: Berkeley Lab

“We think that 2D-EV, by providing unprecedented details about photochemical reaction dynamics, has the potential to answer many currently inaccessible questions about photochemical and photobiological systems,” says Fleming, a physical chemist and internationally acclaimed leader in spectroscopic studies of events that take place on the femtosecond time-scale. “We anticipate its adoption by leading laboratories across the globe,”

Fleming is the corresponding author of a paper in the Proceedings of the National Academy of Sciences (PNAS) titled “Correlating the motion of electrons and nuclei with two-dimensional electronic–vibrational spectroscopy.” Co-authors are Thomas Oliver and Nicholas Lewis, both members of Fleming’s research group.

Fleming and his research group were one of the key developers of 2D electronic spectroscopy (2D-ES), which enables scientists to follow the flow of light-induced excitation energy through molecular systems with femtosecond temporal resolution. Since its introduction in 2007, 2D-ES has become an essential tool for investigating the electronic relaxation and energy transfer dynamics of molecules, molecular systems and nanomaterials following photoexcitation. 2D infrared spectroscopy is the go-to tool for studying nuclear vibrational couplings and ground-state structures of chemical and complex biological systems. 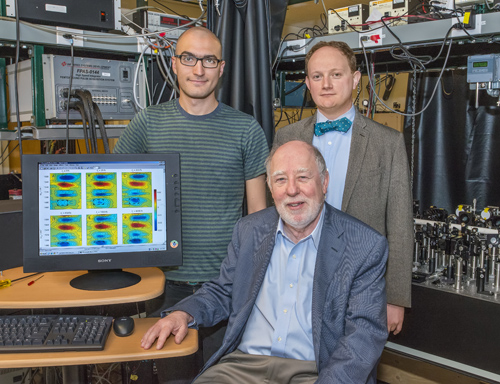 From left, Nicholas Lewis, Graham Fleming and Tom Oliver developed 2D-EV, a spectroscopy technique that enables electronic and molecular dynamics during a photochemical reaction to be simultaneously monitored on a femtosecond time-scale. (Photo by Roy Kaltschmidt)

“Combining these two techniques into 2D-EV tells us how photoexcitation affects the coupling of electronic and vibrational degrees of freedom,” says Oliver. “This coupling is essential to understanding how all molecules, molecular systems and nanomaterials function.”

In 2D-EV, a sample is sequentially flashed with three femtosecond pulses of laser light. The first two pulses are visible light that create excited electronic states in the sample. The third pulse is mid-infrared light that probes the vibrational quantum state of the excited system. This unique combination of visible excitation and mid-infrared probe pulses enables researchers to correlate the initial electronic absorption of light with the subsequent evolution of nuclear vibrations. 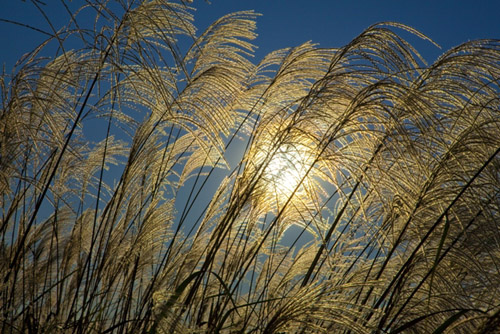 Photochemical reactions during photosynthesis enable plants to convert solar energy into chemical energy that is stored as sugars in the plants’ biomass. (Photo by Roy Kaltschmidt)

As a demonstration, Oliver, Lewis and Fleming used their 2D-EV spectroscopy technique to study the excited-state relaxation dynamics of DCM dye dissolved in a deuterated solvent. DCM is considered a model “push-pull” emitter – meaning it contains both electron donor and acceptor groups – but with a long-standing question as to how it fluoresces back to the ground energy state.

“From 2D-EV spectra, we elucidate a ballistic mechanism on the excited state potential energy surface whereby molecules are almost instantaneously projected uphill in energy toward a transition state between locally excited and charge-transfer states before emission,” Oliver says. “The underlying electronic dynamics, which occur on the hundreds of femtoseconds time-scale, drive the far slower ensuing nuclear motions on the excited state potential surface, and serve as an excellent illustration for the unprecedented detail that 2D-EV will afford to photochemical reaction dynamics.”

One example of how 2D-EV might be applied is in the study of rhodopsin, the pigment protein in the retina of the eye that is the primary light detector for vision, and carotenoids, the family of pigment proteins, such as chlorophyll, found in green plants and certain bacteria that absorb light for photosynthesis.

“The nonradiative energy transfer in rhodopsin and carotenoids is thought to involve the breakdown of one of the most widely used approximations of quantum mechanics, the Born-Oppenheimer approximation, which states that since motion of electrons are far faster than nuclei, as represented by vibrational motion, the nuclei respond to changes in electronic states,” Oliver says. “With 2D-EV, we will be able to directly correlate the degrees of electronic and vibrational freedom and track their evolution as a function of time. It’s a chicken and egg kind of problem: Do the electrons or nuclei move first?  2D-EV will give us insight into whether or not the Born-Oppenheimer approximation is still valid in these cases.”

For nanomaterials, 2D-EV should be able to shed much needed light on how the coupling of phonons – atomic soundwaves – with electrons impacts the properties of carbon nanotubes and other nanosystems. 2D-EV can also be used to investigate the barriers to electron transfer between donor and acceptor states in photovoltaic systems.

“We are continuing to refine the 2D-EV technology and make it more widely applicable so that it can be used to study lower frequency motions that are of great scientific interest,” Oliver says.

This research was funded by the DOE Office of Science and the National Science Foundation.

For more about the research of Graham Fleming, go here