Droughts are Pushing Trees to the Limit

Droughts in the Southwest made more severe by warming temperatures are putting plants in stressful growing conditions, a new study has found, identifying an increasingly water-thirsty atmosphere as a key force that sucks moisture from plants, leading to potentially higher stress – especially in mid and low elevations.

As temperatures rise and droughts become more severe in the Southwest, trees are increasingly up against extremely stressful growing conditions, especially in low to middle elevations, University of Arizona researchers report in a study soon to be published in the Journal of Geophysical Research Biogeosciences.

Lead author Jeremy Weiss, a senior research specialist in the UA department of geosciences, said: “We know the climate in the Southwest is getting warmer, but we wanted to investigate how the higher temperatures might interact with the highly variable precipitation typical of the region.”

“The approach we took allows us to model and map potential plant responses to droughts under past, present and future conditions across the whole region,” explained Julio Betancourt, a senior scientist with the U.S. Geological Survey who co-authored the study along with Jonathan Overpeck, co-director of the UA Institute of the Environment. Betancourt holds adjunct appointments in the UA department of geosciences, the UA School of Geography and Development, the UA School of Natural Resources and the Environment and the UA Laboratory of Tree-Ring Research.

“Our study helps pinpoint how vegetation might respond to future droughts, assuming milder winters and hotter summers, across the complex and mountainous terrain of the Southwest,” Betancourt said.

For this study, the researchers used a growing season index that considers day length, cold temperature limits and a key metric called vapor pressure deficit to map and compare potential plant responses to major regional droughts during 1953-56 and 2000-03. 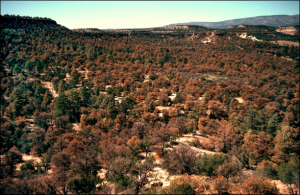 In the summer of 2002, pinyon pines began dying in large numbers from drought stress and an associated bark beetle outbreak. This aerial photo was taken near Los Alamos, N.M. Photo by: Craig D. Allen, USGS

A key source of plant stress, vapor pressure deficit is defined as the difference between how much moisture the air can hold when it is saturated and the amount of moisture actually present in the air. A warmer atmosphere can hold more water vapor, and during droughts it acts like a sponge sucking up any available moisture from the ground surface, including from plants.

Both droughts – with the more recent one occurring in warmer times – led to widespread tree die-offs, and comparisons between them can help sort out how both warming and drying affected the degree of mortality in different areas.

Weiss pointed out that multiyear droughts with precipitation well below the long-term average are normal for the Southwest. He said the 1950s drought mainly affected the U.S.-Mexico borderlands and southern High Plains and happened before warming in the region started. The 2000s drought centered on the Four Corners area and occurred after regional warming began around 1980.

The actual causes of physiological plant stress and tree death during droughts are being investigated by various research teams using models and field and greenhouse experiments. One possibility is prolonged embolism, or the catastrophic disruption of the water column in wood vessels as trees struggle to pump moisture from the soil in the heat of summer. The other is carbon starvation as leaves shut their openings, called stomates, to conserve leaf water, slowing the uptake of carbon dioxide needed for photosynthesis. Stomatal closure is triggered by deficits in the ambient vapor pressure, which controls the rate of evaporation for water and is very much influenced by temperature.

“When the air is hotter and drier, it becomes more difficult for plants to conserve water while taking up carbon dioxide,” Weiss explained. “As plants become starved of carbon, it also weakens their defenses and renders them more susceptible to insect pests.”

To make matters worse, Weiss said, the size of the “atmospheric sponge” grows faster during increasingly hotter summers like those over the last 30 years, absorbing even more moisture from soil and vegetation.

“When warmer temperatures combine with drought, relatively stressful growing conditions for a plant become even more stressful,” Weiss explained. “You could say drought makes that atmospheric sponge thirstier, and as the drought progresses, there is increasingly less moisture that can be evaporated from soil and vegetation to fill – and cool – the dry air.”

“In a sense, it’s a vicious circle. Warmer temperatures during droughts lead to even drier and hotter conditions.”

The researchers mapped relatively extreme values of vapor deficit pressure for areas of tree die-offs during the most recent drought determined from annual aerial surveys conducted by the U.S. Forest Service.

“Our study suggests that as regional warming continues, drought-related plant stress associated with higher vapor pressure deficits will intensify and spread from late spring through summer to earlier and later parts of the growing season, as well to higher elevations,” the authors write. This could lead to even more severe and widespread plant stress.

The results are in line with other trends of warming-related impacts in the Southwest over the past 30 years, including earlier leafout and flowering, more extensive insect and disease outbreaks, and an increase in large wildfires.

“We’re seeing climatic growing conditions already at an extreme level with just the relatively little warming we have seen in the region so far,” Weiss said. “Our concern is that vegetation will experience even more extreme growing conditions as anticipated further warming exacerbates the impacts of future droughts.”

Betancourt said: “We have few ways of knowing how this is going to affect plants across an entire landscape, except by modeling it. There is not much we can do to avert drought-related tree mortality, whether it is due to climate variability or climate change.”

Instead, Betancourt suggested, land managers should focus on how to manage the regrowth of vegetation in the aftermath of increased large-scale ecological disturbances, including wildfires and drought-related tree die-offs.

“Models like the one we developed can provide us with a roadmap of areas sensitive to future disturbances,” Betancourt said. “The next step will be to start planning, determine the scale of intervention and figure out what can be done to direct or engineer the outcomes of vegetation change in a warmer world.”