Doing Laundry in Outer Space? She’s Working on a Solution for That

UA College of Engineering senior Christina Morrison is seeking answers to a down-to-earth problem for space travelers: how to keep their clothes clean.

Astronaut Don Pettit, a University of Arizona College of Engineering alumnus, wore the same pair of shorts for months at a time while living on the International Space Station because doing laundry was not an option.

When clothes got too dirty, Pettit and his crewmates stored them onboard until they could be thrown out — launched with other debris on a spacecraft and incinerated upon entering Earth’s atmosphere. 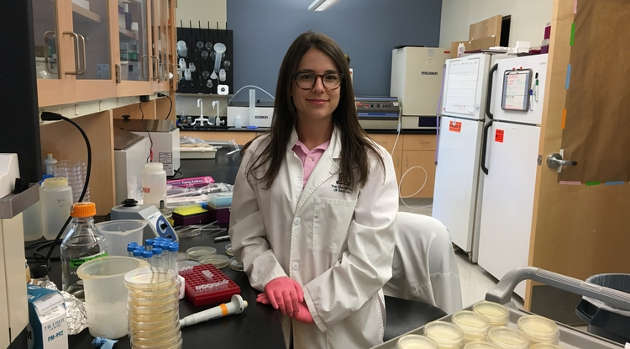 Christina Morrison presented her research at the 2017 Arizona Space Grant Symposium in Tempe. This fall she will begin graduate studies in environmental engineering at one of the several universities where she has been accepted. (Photo credit: Irma Perez)

Back on the UA’s main campus, undergraduate research assistant Christina Morrison wants to make life more comfortable for astronauts such as Pettit by making clothes stay cleaner for longer in space.

Clothes add a lot of weight to spacecraft, and water is too precious to be used for cleaning them. So Morrison’s goal is to find a way for astronauts to do laundry in space without using water. The research is funded by a NASA Space Grant.

Silver and hydrogen peroxide are both known germ-fighters, and research has shown they become an even stronger disinfectant when combined and applied to water.

Working with UA professor of microbiology Charles Gerba, Morrison has for the first time demonstrated that this synergistic effect works on textiles, too.

Morrison and Gerba applied low concentrations of hydrogen peroxide to swatches of antimicrobial socks embroidered with silver-ion threads and exposed the treated material to Staphylococcus aureus, a bacterium often found in the nose and on the skin. The researchers compared how the germs fared on these swatches versus how they did on untreated antimicrobial material and on regular socks.

Within an hour, they were able to achieve a nearly 5-log reduction, or  about 99.999 percent, of the bacteria on treated antimicrobial socks. That is compared with a 0.25 log reduction, or 43.76 percent, on untreated silver-ion socks, said Morrison, a senior in chemical and environmental engineering who already holds a bachelor’s degree in ecology and evolutionary biology from the UA.

“In a sense, we were laundering or washing the antimicrobial socks with hydrogen peroxide,” said Morrison, who will receive her engineering degree during the UA’s Commencement ceremony on Friday.

These numbers could add up to a much more pleasant atmosphere in spacecraft.

“The clothes will stay germ-free longer, because of the silver ions, and can be laundered by adding hydrogen peroxide,” Morrison said. “Washed just twice, one shirt could stay microbe- and odor-free in the same length of time an astronaut would normally wear and discard three shirts. This saved mass would drastically reduce the amount of clothing needed to launch into space and allow longer missions.”

In the next phase of the research project, a group of human subjects will wear antimicrobial socks or regular socks and remove them for the researchers to treat with hydrogen peroxide. A second group will serve as an “olfactory panel” to assess freshness — that is, to smell randomly assigned swatches from treated or untreated antimicrobial socks and treated or untreated regular socks.

“We hope it won’t be too hard to find volunteers,” Morrison joked.