Does Sex Matter? It May When Evaluating Mental Status 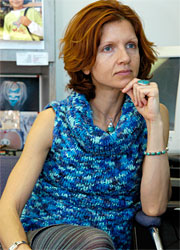 Schizophrenia is a mental disorder that differs between the sexes in terms of age at onset, symptomatology, response to medication, and structural brain abnormalities. Now, a new study from the Université de Montréal shows that there is gender difference between men and women’s mental ability – with women performing better than men. These findings, published recently in, Schizophrenia Research, have implications for the more than 300 000 affected Canadians.

“We are the first to report sex differences in brain function of schizophrenics,” says Université de Montréal professor, Adrianna Mendrek a researcher at the Centre de Recherche Fernand-Seguin, Hospital Louis-H Lafontaine. “We chose to study a task involving mental rotation of a three dimensional image because in healthy men and women, this consistently elicits differences in terms of reaction time and performance accuracy.”

Results opposite for control versus schizophrenics

“Sex hormones such as testosterone and estrogen may explain these results,” says Mendrek. “Findings from our other studies have shown that the testosterone level was positively correlated with activity in healthy men but not in healthy women. And conversely schizophrenic women have been shown to have higher levels of this hormone.”

The resting brains of healthy men and women are not the same, according to Mendrek. The area of the brain active while resting (the “default mode network”) is more active for women than men. “We are the first group to report sex differences in this network using fMRI,” says Mendrek. “The more active resting female brain may explain their reported ability to multi-task and be more introspective than men”

This study was funded by the Canadian Institutes of Health Research, the Institute of Gender and Health and the Fonds de la recherché en santé Québec, as well as Hopital Louis-H. Lafontaine Foundation.