Documents that Changed the World: The Internet Protocol, 1981

Global communication platform and nexus of social media to some and just “a series of tubes” to others, the Internet certainly revolutionized communications. But how exactly does it work, and how did it get started?

Joe Janes, professor in the UW Information School, takes up the questions in the latest installment of his podcast series, “Documents that Changed the World.”

We often take for granted the documents of all kinds that surround us in life, Janes says. His podcast series, now in its fourth installment, is intended to “open up” the stories of such documents to explore what they mean and, in many cases, how that meaning is changing over time.

This time, the document in question is “RFC 791, the Internet Protocol,” from 1981 — a document not often noted when Internet anniversaries come to mind, Janes says. 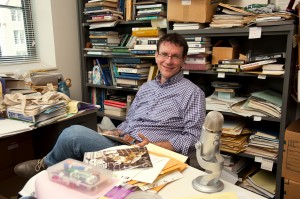 “I can tell you why,” he noted in the essay, “it’s very technical and makes pretty turgid reading. Much of its 45 pages is the equivalent of typewriter art diagrams specifying how the guts of the Internet work.”

Why this topic? Janes said he was struck by the sophistication of its design.

“There’s a great deal of physical infrastructure involved here, with hubs and routers and cable and modems and the demands on the network grow every day. But the simplicity of the intellectual architecture is quite striking and elegant, which has led to its scalability and sustainability.

“Not to mention the process by which this all happens–the domain of the geeks, so to speak, and the way that they have of working together in an ultra-rational, if casual, way, is also remarkable.”

The Documents that Changed the World podcast series available on iTunes and on the iSchool website (along with transcripts), and UW Today is presenting them as an occasional series.

Janes continues to research and record new installments, and the series is now approaching its 11,000th iTunes download.