By looking at an aging mouse’s response to West Nile virus, researchers at the UA have discovered that the immune system’s CD4 T-cells, which remember pathogens they’ve seen before, become multitaskers.

Michael Kuhns is half the age of the people he is most concerned with.

Kuhns, an assistant professor in University of Arizona’s Department of Immunobiology and a member of the BIO5 Institute, grew up in Prescott, Arizona, a retirement community where the median age is over 50, and more than 30 percent of the population is over 65.

That’s why he suspects residents from his hometown “might see the value in their tax dollars going to this kind of research.”

His latest research, funded by a National Institutes of Health grant, recently was published in the peer-reviewed, open-access journal eLife. It proves that, when it comes to old age and the immune system, “it’s not as simple as ‘things just decline,'” Kuhns says.

To better understand why, with age, the immune system stops working as well as it used to, Kuhns and graduate research assistants Neha Deshpande and Heather Parrish turned to mice. Old mice, actually.

“We know a lot about how the immune system works at its peak,” Kuhns says. “We’ve worked out the rules for how it functions in adults, so now we need to figure out what the rules are in the elderly.” 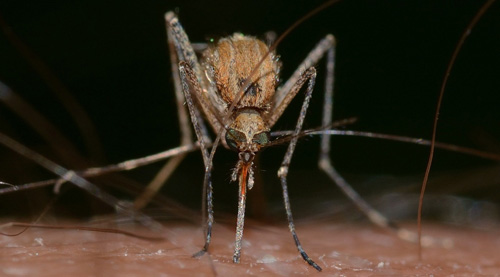 The elderly are particularly susceptible to West Nile virus, a disease transmitted by mosquitoes. By researching immune response in old mice, the UA’s Michael Kuhns hopes to improve efforts to tailor vaccines for the elderly. Image credit: University of Arizona

The 22-month-old mice they used in the lab were roughly 70 years old in human years. The parallels between their immune system and the human system made them a good model.

Both immune systems have CD4 and CD8 T-cells that help the body recognize and destroy pathogens, including bacteria and viruses. They remember pathogens they’ve seen before. This helps them fight off infections quicker if and when those same pathogens invade again.

The researchers focused their attention on CD4 T-cells because they play a central role in directing immunity by telling other immune cells where to go and what to do once they get there.

An immune system without CD4 T-cells would function something like an army without field generals. And, in fact, HIV infection is deadly because it eliminates CD4 T-cells, effectively taking down the whole immune system.

Using technology that was developed at the Stanford University School of Medicine, where Kuhns was a postdoctoral fellow, the team counted the number of CD4 T-cells in a mouse that could recognize a virus to which both elderly mice and humans are particularly susceptible: West Nile virus. By figuring out how many CD4 T-cells were capable of “seeing” the virus, they could evaluate an elderly mouse’s potential to fight infection.

The team found that although the total number of CD4 T-cells declines with age, the number that could recognize the virus increases.

“These results strongly suggest that the CD4 T-cells that remain in old mice have the capacity to ‘see’ multiple different pathogens. This was very surprising because other labs, including that led by Janko Nikolich-Zugich at the UA, have previously shown that the number of CD8 T-cells that can ‘see’ and fight off a pathogen decrease over the lifespan,” Kuhns explains.

“Our work really shows that, at least for different T-cell populations, the rules change with age.”

Over the years, the CD4 T-cells appeared to become poly-specific. In other words, they’re multitasking.

“There are fewer of them, but each cell is taking on more,” Kuhns says.

A follow-up study by Kuhns and colleagues will explore the “functional consequences” of changing the rules. Their ultimate goal is to define the new rules that govern the old immune system to improve efforts “to better tailor immune-therapeutics and vaccine strategies for the elderly.”