“Hire the best people.” We’ve all heard that.

But often groups of “the best” — those with the highest abilities — don’t do the best job at solving a difficult problem, according to Scott Page, University of Michigan professor and author of The Difference, a classic book on the benefits of diversity.

“The diverse group almost always outperforms ‘the best’ group by a substantial margin,” said Page, who spoke at the University of Delaware on May 5 as part of the spring lecture series organized by UD’s Center for the Study of Diversity.

“Scott Page is an international leader in advocating the benefits of diversity from a strong analytical perspective,” said James Jones, director of the center. “He introduces complexity that challenges us to think in different and creative ways. It is a great opportunity for UD to have Scott’s wisdom and wealth of experience to illuminate these complexities and provide insight into how to address them.” 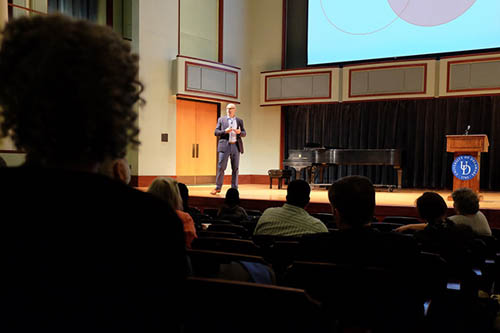 Page, the University of Michigan’s Leonid Hurwicz Collegiate Professor of Complex Systems, Political Science and Economics and director of its Center for Complex Systems, is encouraging people to think differently about diversity. He wants to take diversity out of the legal, political and moral realm and focus instead on its scientific benefits.

“In solving a difficult problem, what you want is not so much smart people, but interesting collections of tools,” Page said.

That increasingly holds true for scientific innovation, according to Enhancing the Effectiveness of Team Science, published in 2015 by the National Research Council.

An analysis of all the papers published in the Web of Science between 1960 to 2013 revealed that the size of authoring groups has been increasing. Today, 90 percent of all science and engineering publications are authored by two or more people. Since 2000, teams of six to 10 authors from more than one institution have been most common. The papers with 100 or more citations are four times as likely to be written by teams versus individuals.

“The really good papers combine novel and conventional citations, which means that people have deep understanding of different things,” Page said. “The best papers and patents are written by diverse teams, people who have worked on different stuff. ‘B+ Land’ is working with people like yourself.”

“‘A Land’ is where people of different ethnicities are involved,” Page said. “The best stuff is done by diverse people with diverse ideas.”

“Universities are broken into silos, and siloing intellectually is not a good thing,” Page said. “Yet few if any funding programs fund team-based science.”

The worst papers and patents are done where the “diverse teams culture” is wrong, Page said. But how do you fix it?

Page began answering the question by recounting a metaphor by the late writer David Foster Wallace. Two young fish are swimming along and meet a wise, old fish swimming the other way, who says, “Morning boys, how’s the water?” And the two young fish swim on and one looks at the other and says, “What the hell is water?”

Translation: Sometimes the most obvious, important realities in life are the ones that are the hardest to see and talk about.

People must feel a sense of belonging to a group, Page said. They must like and care about each other. They also need to care about the problem they are working on.

People need to care about each other, but also challenge ideas. A university is a place where you can practice and learn these skills, he said.

Comfort doesn’t equal success, he noted. The discussions won’t all be comfortable. If everyone agrees in a meeting, then you didn’t have enough diversity, he said.

At his university, graduate students can easily transfer across departments to expand their skill sets. Some departments also use cluster hires. As well, three professors put money in to hire a postdoc who is working at the intersection of new fields.

“Diversity is a learned behavior,” Page said. “Learn to work with people different from yourself. That’s an incredible skill.”

Chanele Moore, who earned her doctorate in sociology at UD and is a teacher in the Associate in Arts Program, said she attended the talk because it’s her area of training and she wants to best prepare her students for the future.

“I’m very interested in supporting students,” said Moore, who engages her students in group work where they aren’t always with students like themselves.

“I want to teach the value of diversity,” Moore said.

The lecture was sponsored by UD’s Center for the Study of Diversity, with support from the Office of the Provost, the Research Office and the Vice Provost for Diversity.