Developed by the Georgia Tech Research Institute (GTRI), Diamond Eye is a platform for one-stop data analytics. Before creating Diamond Eye, GTRI researchers had built a series of analytics tools for individual customers, such as an application-specific tool for monitoring Twitter and open source data for first responders. But because they were developed for specific applications, these tools were not designed to be used beyond the original goals and customers.

Diamond Eye takes advantage of the expertise developed for these projects. The platform enables data ingestion, processing and visualization in a single package, and is able to adapt to new data sources, new analytics, or new visualizations. Developing a flexible application program interface (API) helped make it user-friendly.

“Before Diamond Eye, it was difficult to share analytics because only the developer that had created it had the access or the know-how to use it,” said Amy Sharma, a research engineer at GTRI. “With this new framework, anyone can utilize the analytics and any developer can add new data, analytics, or visualizations.”

The system was designed to help users answer historical and real-time questions with their data. It can also provide situational and predictive results, using information about the past to help predict future conditions.

The team’s analytics work under GTRI’s Business Intelligence Strategic Initiative focuses on open data sets, such as those from social media platforms like Twitter, as well as on closed-source data provided by partners. 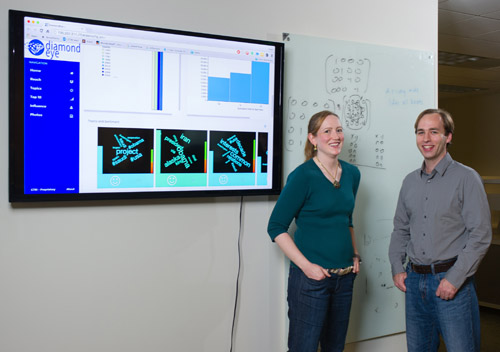 To learn about the key problems that businesses wanted to solve with analytics, scientists working on the project interviewed more than a dozen people in various sectors of business, with an emphasis on marketing, social media and retail organizations. An oft-cited need was for analyzing one-to-one marketing data.

For consumer brands, a traditional marketing technique involves creating a message and then broadcasting that message on TV or the Internet, hoping it resonates with a lot of potential customers. In a more modern approach, the focus is on identifying interested individuals in social media and interacting with them directly. That one-on-one marketing can either be through personalized campaigns on such platforms as Instagram and Twitter, or by identifying influential users on Twitter and interacting with them directly in the hope that they will share the message to their followers.

“One of the possible applications of our technology is to help companies better understand who is out there in social media, how you should interact with them, and how your interactions are being received,” said David Ediger, a research engineer at GTRI.

Another big question that almost every company wanted answered is how to measure marketing value on social media. The team hasn’t yet come up with a way to help companies measure this, but this solution could be in the future for Diamond Eye.

“Companies are spending very, very large budgets on marketing and they want to know if they’re getting bang for their buck on Facebook and Twitter and Instagram,” Ediger said. “We have not solved that problem, but I think we’re scratching at some possible solutions for how to measure return on investment.”

The team recently put Diamond Eye to the test by developing a social media monitoring platform for the Offshore Technology Conference, a conference that attracts more than 90,000 persons each May in Houston, Texas. In less than six weeks, GTRI researchers added the appropriate data feeds, analytics, and visualizations to provide basic Twitter statistics such as timelines, tweet frequency, follows, and platforms. They also created complicated streaming analytics to measure sentiment and most influential users, and the ability to track and sort images on Instagram and Twitter.

The team’s analytics are also useful beyond marketing. For example, Diamond Eye could also help manufacturing companies understand why equipment in one region might be breaking down more often than in other areas.

“We can marry text information from a human with numeric information from a machine and then build models about failure rates,” Sharma said. “If we notice a pattern in which machines in one region seems to be breaking more often, the company can figure out whether they might have received a bad batch of replacement parts – or whether the issue might be a bad repair person or technique.”

The research was supported by GTRI’s independent research and development program.