The Georgia Tech Research Institute (GTRI) has opened a new compact range that will be used for radar cross section measurements and antenna testing. The new facility, which is shielded against electromagnetic interference, will be used for GTRI’s defense-related research projects and collaborations with outside organizations.

Located in GTRI’s midtown Atlanta campus, the facility has a test zone that is approximately six feet wide, four feet tall and six feet deep. It can test at frequencies ranging from two gigahertz (GHz) to 100 gigahertz, and that range can be extended down to 800 megahertz (MHz).

“This facility was designed for measuring small prototypes or for portions of larger systems,” said Stephen Blalock, a GTRI senior research technologist who manages the facility. “We will use it primarily for measuring radar signatures and for determining antenna characteristics. It will help us iterate on new designs and be certain that we’ve met design requirements.”

The new range is completely surrounded by metal walls and doors designed to keep out electromagnetic energy from a broad range of sources.

“When we go into the chamber and close the doors, it is very electromagnetically quiet,” Blalock said. “When we want to make measurements that require a quiet facility, we can go inside the chamber and be isolated from outside interference from radio and television broadcast stations, and anything else. This gives us an important new capability.” 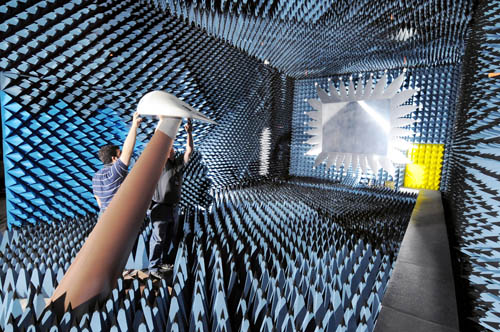 The range was designed with a novel integrated mobile absorber wall that can be deployed to cover the compact range reflector, allowing the facility to be used as an anechoic chamber. “This mode will be used for testing at lower frequencies, or when the compact range reflector is not needed, “ Blalock explained. “This provides us with a more versatile, reconfigurable test facility.”

Since the 1970s, GTRI has operated a compact range on its midtown campus, but that facility is older, not electromagnetically shielded, and designed for a different frequency range. Both facilities will continue to be used in the organization’s major defense-related research programs, Blalock said.

The new compact range will be used to support a broad range of GTRI research projects, and will be made available for testing and collaborative research with outside organizations. Because of its capabilities and broad frequency range, the facility will be attractive to contactors working on Department of Defense projects.

“The industry representatives who have seen it have been very interested in knowing its capabilities, so we expect that outside organizations will want to use it for testing devices that are appropriate for it,” he added.

Additional capabilities at GTRI complement the new range and create a unique test and measurement environment, Blalock noted. For instance, GTRI has testing equipment that allows it to evaluate materials used in antennas at both low and high temperatures. And at its Cobb County facility north of Atlanta, GTRI operates a far-field outdoor antenna range and other test equipment.

“We have systems that we built and optimized for the purpose of testing materials used in these devices, and with this compact range, they give us capabilities that are unique,” he explained. “GTRI can offer a comprehensive testing ability under one roof.”

The new range, located in the Centennial Research Building on 10th Street, is 18 feet high, 24 feet wide and 60 feet long, with a 10-foot by 12-foot door for bringing in devices to be tested.

Among the facility’s features are:

Because of their unique design, compact ranges can test phenomenon that would otherwise require much larger outdoor test facilities.

For instance, radar beam patterns normally take several miles to spread out and become flat once they leave a transmitter. The unique reflector design used in compact ranges spreads out the pattern in a few dozen feet, allowing testing to be done indoors under controlled conditions.

Foam absorbers that surround the interior of the facility attenuate signals and prevent them from scattering. That means signals from the transmitter return to the receiver only from the target, allowing clean measurements.

“The design allows us to get a realistic picture of what the beam would look like if the transmitter were miles away,” Blalock said. “This is essential for signature measurements, where we are trying to replicate what would be happening in a real-world scenario.”

Over the next 18 months, GTRI engineers will be working to obtain formal range certification for the facility. That process, which focuses on radar cross section measurement capabilities, requires thorough documentation of the facility and procedures used there, along with inspections from a national certification and standards organization.

The compact range was invented at GTRI in the 1960s by researcher Richard Johnson. It is now a commercial product used by many organizations to test not only Department of Defense-related equipment, but also commercial devices.