Earthquakes that happen deep beneath the earth’s surface have long been enigmatic to geologists. Now researchers from Brown University have shown strong evidence that water squeezed out of a mineral called lawsonite could trigger these mysterious quakes.

PROVIDENCE, R.I. [Brown University] — Geologists from Brown University may have finally explained what triggers certain earthquakes that occur deep beneath the Earth’s surface in subduction zones, regions where one tectonic plate slides beneath another.

Subduction zones are some of the most seismically active areas on earth. Earthquakes in these spots that occur close to the surface can be devastating, like the one that struck Japan in 2011 triggering the Fukushima nuclear disaster. But quakes also occur commonly in the subducting crust as it pushes deep below the surface — at depths between 70 and 300 kilometers. These quakes, known as intermediate depth earthquakes, tend to be less damaging, but can still rattle buildings.

Intermediate depth quakes have long been something of a mystery to geologists.

“They’re enigmatic because the pressures are so high at that depth that the normal process of frictional sliding associated with earthquakes is inhibited,” said Greg Hirth, professor of earth, environmental, and planetary sciences at Brown. “The forces required to get things to slip just aren’t there.” 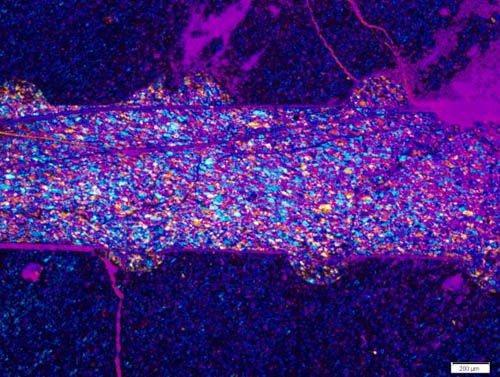 The mineral lawsonite undergoes brittle failure at high temperature and pressure, as evidenced by the cracks seen in the sample above. That brittleness could trigger earthquakes in subduction zones where lawsonite is present. Image credit: Hirth lab/Brown University

But through a series of lab experiments, Hirth and postdoctoral researcher Keishi Okazaki have shown that as water escapes from a mineral called lawsonite at high temperatures and pressures, the mineral becomes prone to the kind of brittle failure required to trigger an earthquake.

“Keishi’s experiments were basically the first tests at conditions appropriate for where these earthquakes actually happen in the earth,” Hirth said. “They’re really the first to show strong evidence for this dehydration embrittlement.”

The work is published in the journal Nature.

The experiments were done in what’s known as a Grigg’s apparatus. Okazaki placed samples of lawsonite in a cylinder and heated it up through the range of temperatures where water becomes unstable in lawsonite at high pressures. A piston then increased the pressure until the mineral began to deform. A tiny seismometer fixed to the apparatus detected sudden cracking in the lawsonite, a signal consistent with brittle failure.

Okazaki performed similar experiments using a different mineral, antigorite, which had been previously implicated as contributing to intermediate depth seismicity. In contrast to lawsonite, the antigorite failed more gradually — squishing rather than cracking — suggesting that antigorite does not play a role in these quakes.

“That’s one of the cool things about this,” Hirth said. “For 50 years everyone has assumed this is a process related to antigorite, despite the fact that there wasn’t much evidence for it. Now we have good experimental evidence of this dehydration process involving lawsonite.”

Ultimately, Hirth says research like this might help scientists to better understand why earthquakes happen at different places under different conditions.

“Trying to put into the context of all earthquakes how these processes are working might be important not just for understanding these strange types of earthquakes, but all earthquakes,” he said. “We don’t really understand a lot of the earthquake cycle. Predictability is the ultimate goal, but we’re still at the stage of thinking about what’s the recipe for different kinds of earthquakes. This appears to be one of those recipes.”