Decolonisation of British and French Empires

Britain’s impending withdrawal from Afghanistan and France’s recent dispatch of troops to the troubled Central African Republic are but the latest indicators of a long-standing pattern.

Since 1945 most British and French overseas security operations have taken place in places with current or past empire connections. Most of these actions occurred in the context of the contested end of imperial rule  or decolonisation. Some were extraordinarily violent; others, far less so. 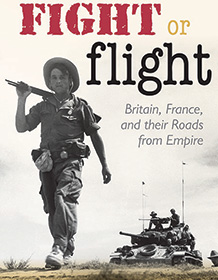 A new book by a University of Exeter historian explores the collapse of empires, why some withdrawals were more violent than others and how wider global affairs made it impossible to contain colonial problems locally. ‘Fight of Flight: Britain, France, and their Roads from Empire’ is the first comparative account of these dramatic imperial downfalls, explaining the end of the British and French colonial empires as an intertwined process.

Professor Martin Thomas research shows that decolonisation gathered momentum, not as an empire-specific affair, but as a global one, in which the wider march of 20th century history played a part. Global depression, World War and Cold War, anti-colonial ideologies and changing conceptions of human rights contributed to the downfall for Europe’s largest colonial empires in less than two decades from the end of the Second World War. Peaceable ‘transfers of power’ were eclipsed by episodes of territorial partition and mass violence whose bitter aftermath still lingers.

Professor Thomas said:“Historians, journalists and intellectuals, especially in France have pointed to extra-judicial killing, systematic torture, mass internment and other abuses as evidence of just how dirty decolonisation wars could be. Some have gone further, blaming the dismal human rights records of numerous post-colonial states on their former imperial rulers. Others have pinned responsibility on the nature of decolonisation itself suggesting that hasty, violent or shambolic colonial withdrawals left a power vacuum filled by one-party regimes hostile to democratic inclusion.

He added:“Whatever their accuracy, the extent to which these accusations have altered French and British public engagement with their recent imperial past remains debatable.”

In Britain, media interest in such events as the systematic torture of Mau Mau suspects in 1950s Kenya sits uncomfortably with the enduring image of the British imperial soldier as hot, bothered, but restrained according to Professor Thomas’s research. In France, by contrast the media furores and public debates have been more heated.  After years in which difficult colonial memories were either interiorised or swept under official carpets, big questions have been confronted – and bitterly argued. Should the torture of colonial detainees be recognized as something systematic? Should formal state apologies for these and other colonial abuses be issued? And should the manner in which France’s empire came to an end feature in the school curriculum?

Professor Thomas’s book indicates that for every instance of violence avoided or rights violations acknowledged, there were instances of conflict chosen, even positively embraced. One result is that the messy consequences of British and French decolonisation remain interlocked – and substantially unresolved.