EAST LANSING, Mich. — Curcumin, a compound found in the spice turmeric, is proving effective at preventing clumping of a protein involved in Parkinson’s disease, says a Michigan State University researcher.

A team of researchers led by Basir Ahmad, an MSU postdoctoral researcher, demonstrated earlier this year that slow-wriggling alpha-synuclein proteins are the cause of clumping, or aggregation, which is the first step of diseases such as Parkinson’s. A new study led by Ahmad, which appears in the current issue of the Journal of Biological Chemistry, shows that curcumin can help prevent clumping.

“Our research shows that curcumin can rescue proteins from aggregation, the first steps of many debilitating diseases,” said Lisa Lapidus, MSU associate professor of physics and astronomy who co-authored the paper with Ahmad. “More specifically, curcumin binds strongly to alpha-synuclein and prevents aggregation at body temperatures.” 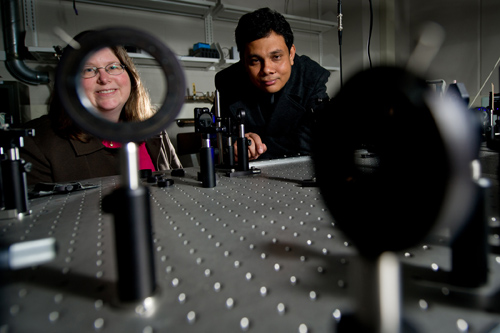 Lapidus’ lab uses lasers to study protein folding. Proteins are chains of amino acids that do most of the work in cells. Scientists understand protein structure, but they don’t know how they are built – a process known as folding. Lapidus’ team is shedding light on the process by correlating the speed at which protein folds with its tendency to clump or bind with other proteins.

When curcumin attaches to alpha-synuclein it not only stops clumping, but it also raises the protein’s folding or reconfiguration rate. By bumping up the speed, curcumin moves the protein out of a dangerous speed zone allowing it to avoid clumping with other proteins.

Finding a compound that can fix a protein when it first begins to misfold can lead scientists to identify drugs that can treat certain diseases. Doctors won’t be prescribing curcumin pills any time soon, though, Lapidus said.

“Curcumin’s usefulness as an actual drug may be pretty limited since it doesn’t go into the brain easily where this misfolding is taking place,” she said. “But this kind of study showcases the technique of measuring reconfiguration and opens the door for developing drug treatments.”