Mark A. Smith is a University of Washington professor of political science and adjunct professor of comparative religion. He is the author of “Secular Faith: How Culture Has Trumped Religion in American Politics,” published in September by University of Chicago Press. He answered a few questions about his book for UW Today.

What’s the concept behind this book?

My book’s overarching theme is that Americans have much more in common politically than you’d expect from observing how the media covers politics. The media tend to focus on our conflicts and disagreements, which are real, but that means ignoring the areas where we have forged a rough consensus. Americans agree on many of the foundational questions of politics, such as the merits of representative democracy, the protection of basic rights, the separation of church and state, and a capitalist but regulated economy.

Of course, we often fight over how to implement those principles — for example, whether posting the Ten Commandments in a courthouse violates the First Amendment, or whether a particular environmental regulation is desirable — but the principles themselves are widely shared. In many countries, by contrast, politics revolves around disputes over the foundational questions. 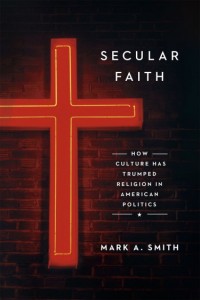 Mark A. Smith’s “Secular Faith: How Culture Has Trumped Religion in American Politics” was published in September by University of Chicago Press. Image credit: University of Washington

Here you view America’s much-hyped “culture wars” over morality and religion through the lens of history. You write that Christians have “openly or tacitly” accepted many modern ideas over the years. “Christians of earlier centuries,” you add, “would be shocked and appalled if they knew about some of the beliefs and practices of Christians today.” What are some examples of these changed beliefs?

Collecting interest on loans would be one example. For much of Western history, Christians held that the Bible and Christian tradition made it immoral for anyone to charge interest, but Christians today do not give the matter much thought one way or the other. The equality of men and women in the political and economic spheres would be another example. Earlier generations of Christians thought it obvious that God, through his written scriptures, wanted men to hold the leadership positions in society. Over the 20th century, however, both Christians and non-Christians in America came to demand that women and men have equal political rights and equal opportunities in the workplace.

More recently, many Christians have begun to accept the morality of homosexuality, and they have challenged the traditional biblical interpretations holding that God condemns all sexual relationships between people of the same sex. This is still a matter of dispute among the diverse groups of Christians in America, but a few decades ago, you would have found virtually no support for accepting homosexuality as moral. Christians also gradually accommodated the practice of divorce — in fact, rates of divorce do not differ much between the Christian and non-Christian parts of the population.

This historical view in mind, you say, “The best predictors of people’s moral beliefs are not their religious convictions or lack thereof, but rather when and where they were born.” Is this because of the changing views described above? Are there not themes in faith and religion that remain constant through the ages, despite waves of cultural change?

Yes, certain themes in Christian history do remain constant, such as the centrality of the crucifixion and resurrection of Jesus and the importance of the Bible’s teachings. How those themes get applied to moral and political issues, however, is a matter of continual interpretation and reinterpretation. Newer generations see their scriptures and traditions in a different light than did their predecessors.

One of the driving forces behind these processes of historical change is that most Christians — the Amish being an obvious exception — exist within and interact with the larger secular culture. Through schools, neighborhoods, workplaces, and the media, new values and beliefs sweep through the entire population. Christians eventually figure out how to merge their religious commitments with the ideas they have absorbed from the secular culture.

As you note, cultural trends carry along Christians and non-Christians alike. Once we grasp this idea, you say, “(W)e see that the debate over the connection between religion and morality is largely theoretical.” Why is this the case, in your view?

Christian defenders such as Greg Koukl and Dinesh D’Souza often allege that atheism leads to immorality. Meanwhile, atheists such as Richard Dawkins and Sam Harris claim that Christianity has often caused moral outrages such as witch hunts, Crusades, and the oppression of women.

I argue that this debate is fundamentally miscast, because when we compare the moral beliefs and practices of Christians and atheists today, we find that they overlap greatly. Meanwhile, both groups hold a dramatically different morality than their counterparts in other times and places. Morality is a moving target, and various moral innovations in the West — for example, those emerging out of the Enlightenment — have affected people of differing religious persuasions and those with none at all. The secular culture is far more important than religion as a driver of morality.

How might the views in this book apply to the political circus of 2016, led so far by the polarizing presence of Donald Trump? If Americans agree on many fundamental issues, as you suggest, why such sharp rhetorical and political divides?

Because we fight over our differences. There’s no point in mounting a political campaign to affirm the values and beliefs that we all share. Candidates, activists and interest groups instead highlight the areas where they dissent from current policies and practices, or where they take stands differing from those advanced by other candidates and parties.

Meanwhile, the news media is drawn to conflict because it makes for interesting reading, listening and viewing. Nobody wants to consume a news story that talks about how we all get along.

Finally, what do you feel the reader will take away from this book?

I hope the reader will come to see that a series of agreements over fundamental principles lie beneath our conflicts. Matters that are subject to intense conflict today, like homosexuality, can evolve into a consensus sometime in the future. Thus, we should pay attention not just to matters of current controversy, but also all of the things we’re not fighting over. The latter are just as important as the former.

Viewed through that lens, American society is not as divided as it at first appears. Yes, we have intense struggles over particular issues, but remember that the culture war is just a metaphor. In many countries, both historically and today, actual wars have been necessary to resolve the disputes over the basic questions of politics. Despite the overheated rhetoric we hear in the media and on the campaign trail, America is not in danger of disintegrating.