UCLA English professor Eric Jager has never played Dungeons and Dragons. He is not a member of the Society for Creative Anachronism. He doesn’t even understand the appeal of historically themed restaurants like Medieval Times.

“If you really want to reenact the Middle Ages, then you should drink contaminated water, contract the plague and die very quickly,” Jager quips. “It wasn’t a very pleasant time.” 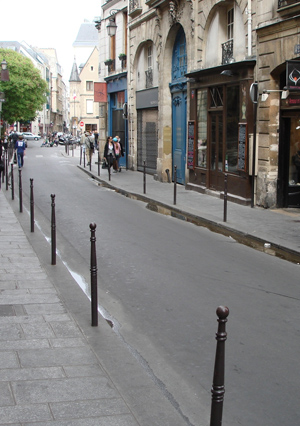 Yet Jager appears to enjoy sending others on the journey. With his scrupulously researched works of true-crime nonfiction, the author and 18-year veteran of UCLA’s English department is gaining a reputation for his uncanny ability to transport readers to medieval France, warts and all. His books have drawn rave reviews, and at least one so far has inspired filmmakers. Not bad for dramas set during a conflict whose very name conveys interminable misery — the Hundred Years’ War.

Jager’s first foray into the genre, “The Last Duel: A True Story of Crime, Scandal, and Trial by Combat in Medieval France” (Broadway Books, 2004), recounted a 1386 duel to the death by two French noblemen, one of whom had accused the other of raping his wife.

“Jager’s book succeeds brilliantly in combining page-turning intensity … with eye-opening insights into the bizarre ritual of judicial combat in the Middle Ages,” the  London Times wrote upon the publication of “The Last Duel,” which was translated into nine languages and shortlisted for the Crime Writers Association’s nonfiction Gold Dagger award.

And the success didn’t end in bookstores. “The Last Duel” was adapted for a BBC TV documentary, and legendary film director Martin Scorsese has secured rights to develop it as a feature-length film. 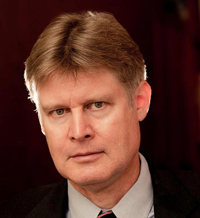 “Few works of fiction will grab readers’ attention as well as Jager’s riveting story of a 1407 murder mystery that split the royal family of France,” an advance notice in Kirkus Review said.

The book illuminates the drama and mystery surrounding the gruesome murder of French King Charles VI’s unpopular younger brother, Duke Louis of Orleans. For the 15 years preceding his murder, the duke served as France’s regent during his brother’s periodic descents into madness. Despite this service to his country, Louis was a controversial figure. A notorious womanizer, he made enemies of several highly placed men by seducing their wives. At the time of his murder, he was suspected of having an affair with the queen. With less provocation, Charles VI had already pulled a sword on his brother and tried to kill him.

Meanwhile, Louis was jostling for power and privilege with other members of the court, and his tax-and-spend ways made him unpopular with his countrymen. So many people had motives for doing away with him that isolating his killer proved a real challenge for Guillaume de Tignonville, Paris’ chief of police at the time.

The resulting story drips with palace intrigue, infidelity and violent encounters, and its “attention to atmosphere and detail allows the setting to come to life in all its gruesome detail,” Publishers Weekly wrote in an advance review. 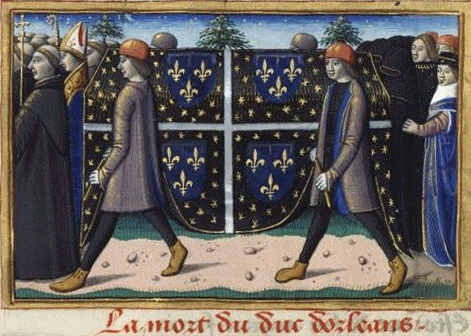 A 15th century illuminated manuscript depicts the 1407 funeral of the Duke Louis of Orleans. Image credit: University of California

More though than a juicy whodunnit, Jager’s efforts show how the events divided France, dissolving the country into a civil war and making it an easy target for the military ambitions of England’s Henry V, whose invasions prolonged France’s involvement in the Hundred Years’ War, which pitted the two kingdoms against one another between 1337 and 1453.

It is “an impressive combination of mystery, crime story, and social and political history,” Publishers Weekly said. Others seem to agree. “Blood Royal” has been picked as a selection of the History Book Club, the Military Book Club, the Scientific American Book Club and the Mystery Guild Book Club. It also is slated for production as an audio book to be narrated by famed film, TV and radio actor René Auberjonois.

Jager traces his interest in the period to the early 1960s, when his father’s job with NATO required the family to relocate from the U.S. to central France. Though a preschooler at the time, the author remembers being fascinated by the ruins of a centuries-old tower in his French town. The experience fueled a boyhood fascination with armor, weaponry and the legends of Robin Hood and King Arthur. By college, however, Jager had moved on to other interests, and he didn’t rediscover his fascination with French language, history and culture until preparing for graduate school in the early 1980s. 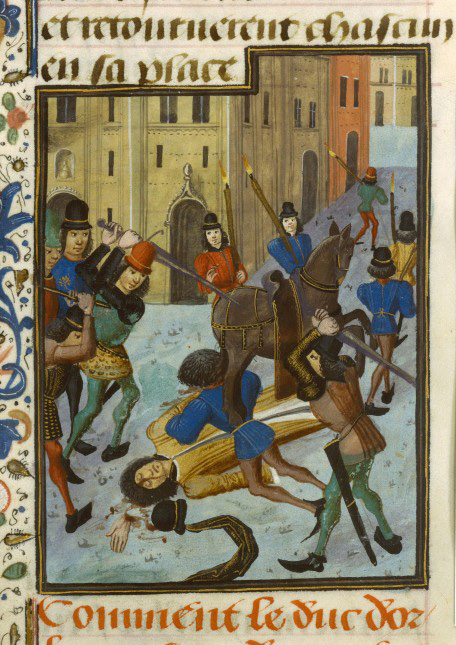 Today at UCLA, he teaches Chaucer, Arthurian legends, Old English and medieval romance — influences that permeate his nonfiction works. And while because of their superb sense of drama and suspense, Jager’s books have lauded for reading like fiction, they are all meticulously researched.

“Blood Royal,” for instance, boasts more than 1,000 footnotes. Jager even flags the occasions where his interpretations are at odds with those of other scholars and provides evidence for those scholars’ cases. In all, he consulted 42 primary sources and 313 secondary sources for the book.

The most important source for “Blood Royal,” Jager explains, was a collection of interviews by law enforcement with witnesses, suspects and inhabitants of Le Marais, the Paris neighborhood in which the murder occurred. Shortly after they were conducted, the interviews were transferred onto a 30-foot scroll of parchment that today is housed in an archive in the French Pyrenees.

He also relied heavily on a chronicle of the era kept by a Parisian monk, as well as a detailed analysis of the case published in 1992 by prominent French historian Bernard Guenée. Unlike Jager’s account, which leaves readers in suspense as to the murderer’s identity for more than half the book, Guenée reveals the culprit in the introduction and spends the rest of his tome analyzing the motives and ramifications.

“The French,” Jager said, “aren’t always the best narrators of their own history.”

For his vivid descriptions, Jager studied old maps, illustrations and paintings, and he walked the streets of contemporary Paris, where his discerning eye picked out such medieval vestiges as the remnants of the rampart and moat that surrounded the city in the 15th century. “Blood Royal” includes a photo of the spot in today’s Paris where the duke was killed on a public street in the middle of a November night 607 years ago.

Jager says his interest in the reign of Charles VI initially was piqued when he was writing 2004’s “The Last Duel.” In that book’s final chapter, the French king experiences the first of the bouts of madness that would characterize the last 30 years of his rule. While researching the scene, Jager learned of the existence of the Duke of Orleans “murder scroll,” which, interestingly, had been lost some time after the case was solved and was not rediscovered until the 1660s. The complete scroll was also published in book form in the 19th century.

Aside from action, passion, intrigue and suspense, Jager is drawn to historical points of transition, he said. In “The Last Duel,” the lawyer of the squire who claims his wife was raped tries to talk his client out of going through with the duel, arguing that this mode of dispute resolution is falling out of favor. Indeed, the encounter becomes the nation’s final “trial by combat” — a court-ordered duel intended to let God determine which of the two men is telling the truth.

Guillaume, the protagonist in “Blood Royal” is similarly a man at the edge of historical and social change. With what an expert on medieval law describes as “remarkable legal and scientific rigor,” Guillaume’s shoe leather, intelligence and courageous pursuit of the truth make him one of history’s first detectives, Jager writes.