University of Delaware researchers have identified a protein, hiding in plain sight, that acts like a bodyguard to help protect and stabilize another key protein, that when unstable, is involved in Crohn’s disease. The fundamental research points to a possible pathway for developing an effective therapy for the inflammatory bowel disease.

The research, by Catherine Leimkuhler Grimes, assistant professor of chemistry and biochemistry at UD, and Vishnu Mohanan, doctoral student in biological sciences, is published in the July 4 issue of the Journal of Biological Chemistry. The study was funded by a grant from the National Institutes of Health (NIH).

As the scientists point out, our immune system provides the first line of defense against invading pathogens, a task even more challenging in the human gut, where over a trillion commensal bacteria live — resident microorganisms that help convert food into protein, vitamins and minerals.

To distinguish “bad” versus “good” bacteria, our bodies rely on a complex network of receptors that can sense patterns that are unique to bacteria, such as small fragments of bacterial cell wall. The receptors recognize and bind to these fragments, triggering an immune response to take out the “bad guys” or control the growth of the “good guys.” 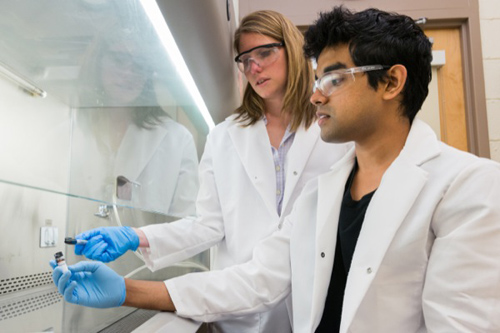 However, when one of these receptors breaks down, or mutates, an abnormal immune response can occur, causing the body to mount an immune response against the “good” bacteria. Chronic inflammatory disorders, such as Crohn’s disease, are hypothesized to arise as a result.

The UD team focused on a protein called NOD2 — nucleotide-binding oligomerization domain containing protein 2. More than 58 mutations in the NOD2 gene have been linked with various diseases, and 80 percent of these mutations are connected specifically to Crohn’s disease, according to Grimes.

In experiments to unveil NOD2’s signaling mechanisms and where they break down, “we stumbled on this chaperone molecule,” says Mohanan, who was the lead author of the scientific article.

The chaperone molecule was HSP70, which stands for “heat shock protein 70.” It assists with the folding of proteins into their correct three-dimensional shapes, even when cells are under stress from elevated body temperatures, such as a fever.

Grimes said she was a little skeptical at first about pursuing studies with HSP70 because it is a commonly known protein, but she found Mohanan’s initial data intriguing.

“Vishnu found that if we increased the expression level of HSP70, the NOD2 Crohn’s mutants were able to respond to bacterial cell wall fragments. A hallmark of the NOD2 mutations is inability to respond to these fragments. Essentially, Vishnu found a fix for NOD2, and we wanted to determine how we were fixing it.”

In further experiments, Mohanan created a tagged-wild-type NOD2 cell line in which NOD2 levels nearly matched the levels found in nature (versus “super” levels that might stimulate an artificial response) and found that NOD2 became more stabilized and degraded more slowly when treated with HSP70. In fact, HSP70 increased the half-life of NOD2 by more than four hours.

“Basically, HSP70 keeps the protein around — it kind of watches over and protects NOD2, and keeps it from going in the cellular trash can,” Grimes explains.

The researchers tested three human cell lines in their study: kidney cells, colon cells and white blood cells. In the next phase of the study, patient tissue will be examined through a collaboration with Nemours/A.I. duPont Hospital for Children to determine if NOD2 levels can be controlled via HSP70 expression.

“We want to figure out why the mutation in NOD2 results in an increase in inflammation,” says Mohanan. “Right now, we have limited knowledge. Once the signaling mechanism is figured out, we will have the keystone.”

Mohanan, who is from the state of Kerala in south India, previously was involved in brain cancer research at UD. He co-authored a journal article in the field, but wanted to further his knowledge and skills through interdisciplinary study.

When the opportunity arose to work with Grimes, Mohanan says he jumped at the chance. He was the first graduate student to join Grimes’s laboratory group in the Department of Chemistry and Biochemistry two years ago, which now includes 13 budding scientists, from postdoctoral fellows and doctoral students to undergraduates. Grimes, who did her graduate work at Princeton and Harvard, recently was named a 2014 Pew Scholar in the Biomedical Sciences.

Based on its increasing incidence worldwide, Crohn’s disease has been identified as an emerging global disease. In the United States alone, as many as 700,000 people may be afflicted, predominantly adolescents and young adults between 15 and 35 years of age, according to the Crohn’s and Colitis Foundation of America.

This research was supported by NIH Grant P20GM103541 from the National Institute of General Medical Sciences.