The mystery of how the world’s largest living reptile – the estuarine crocodile – has come to occupy so many South Pacific islands separated by huge stretches of ocean despite being a poor swimmer has at last been solved by a group of Australian ecologists.

Publishing their new study in the British Ecological Society’s Journal of Animal Ecology, they say that like a surfer catching a wave, the crocodiles ride ocean currents to cross large areas of open sea.

The estuarine crocodile (Crocodylus porosus) is a semi-aquatic reptile, living mainly in rivers, mangroves and estuaries. Its geographical range extends over 10,000 km² of the South-East Pacific, from East India to Fiji and from southern China to North Australia.

Although it spends most of its life in salt-water, it cannot be considered a marine reptile in the same way as a turtle is, for example, because it relies on land for food and water.

Many anecdotal accounts exist of large crocodiles being sighted far out to sea, but this is the first study to show – using underwater acoustic tags and satellite tracking – that estuarine crocodiles ride surface currents during long-distance travel, which would enable them to voyage from one oceanic island and another.

The results explain why, despite occupying such a large range, species diversification of the estuarine crocodile has not occurred. 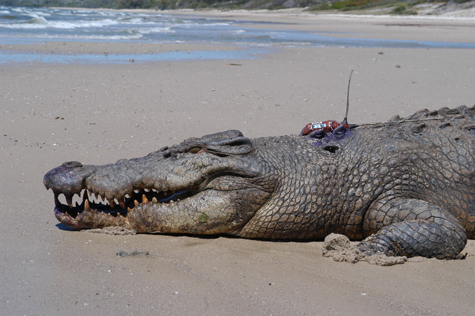 About the image above: A 4.8 m male estuarine crocodile ready for release with satellite transmitter. This crocodile traveled over 590 km by sea. Image credit: American Association for the Advancement of Science.

Working in the remote Kennedy River in North Queensland, Australia, Dr Hamish Campbell from University of Queensland and colleagues from Queensland Parks and Wildlife Service and Australia Zoo tagged 27 adult estuarine crocodiles with sonar transmitters and used underwater receivers to track their every move over 12 months.

During that time they recorded 1.2 million data packets and found that both male and female adult crocodiles undertook long-distance journeys, regularly travelling more than 50km from their home area to the river mouth and beyond into open sea.

The data showed that crocodiles always began long-distance travel within an hour of the tide changing, allowing them to go with the flow, and that they halted their journeys by hauling out on to the river bank when the tide turned against them. 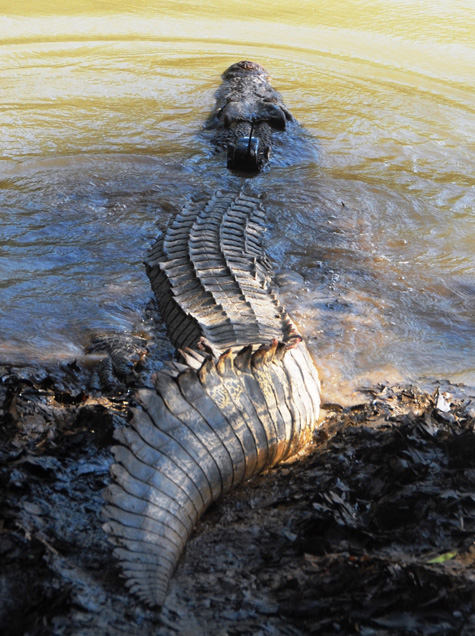 About the image above: A 3.8 m male estuarine crocodile slips back into the water after a satellite transmitter was attached to monitor its behavioral movements. Image credit: American Association for the Advancement of Science.

The team – which included the late Steve Irwin (“The Crocodile Hunter”) – also re-analysed archival data from the few crocodiles that have been satellite tracked whilst undertaking ocean travel. By overlaying the crocodiles’ movements with surface current estimates they found that ocean swimming crocodiles showed a similar behavioural strategy when at sea.

One satellite-tagged crocodile – a 3.84 metre-long male – left the Kennedy River and travelled 590 km over 25 days down the west coast of Cape York Peninsula timing its journey to coincide with a seasonal current system that develops in the Gulf of Carpentaria.

The Torres Straits are notorious for strong water currents, and when the crocodile arrived the currents were moving opposite to its direction of travel. It waited in a sheltered bay for four days and only passed through the Straits when the currents switched to favour its journey.

According to Dr Campbell: “The estuarine crocodile occurs as island populations throughout the Indian and Pacific ocean, and because they are the only species of salt-water living crocodile to exist across this vast area, regular mixing between the island populations probably occurs.”

“Because these crocodiles are poor swimmers, it is unlikely that they swim across vast tracts of ocean. But they can survive for long periods in salt-water without eating or drinking, so by only travelling when surface currents are favourable, they would be able to move long distances by sea. This not only helps to explains how estuarine crocodiles move between oceanic islands, but also contributes to the theory that crocodilians have crossed major marine barriers during their evolutionary past.”

*Special thanks to – Natasha D. Pinol, and the SciPak Team, for the images.