When a University of Washington researcher listened to the audio picked up by a recording device that spent a year in the icy waters off the east coast of Greenland, she was stunned at what she heard: whales singing a remarkable variety of songs nearly constantly for five wintertime months.

Kate Stafford, an oceanographer with UW’s Applied Physics Lab, set out to find if any endangered bowhead whales passed through the Fram Strait, an inhospitable, ice-covered stretch of sea between Greenland and the northern islands of Norway. Only around 40 sightings of bowhead whales, which were hunted almost to extinction, have been reported there since the 1970s.

Stafford and colleagues put two hydrophones, or underwater microphones, on moorings attached to the seafloor in Fram Strait, leaving them there for as long as the batteries would last: nearly a year. Since the population of bowhead whales likely to pass through was thought to number in the tens, they didn’t anticipate much interesting data.

“We hoped to record a few little grunts and moans,” Stafford said. “We were not expecting to get five months of straight singing.”

Not only did they record singing nearly every hour of the day and night, they picked up more than 60 unique songs. A paper detailing their discoveries appears Tuesday (July 31) as the feature article in Endangered Species Research and is openly accessible online.

The variety of tunes was so surprising that the researchers compared the whales’ song catalog to that of birds. “Whether individual singers display one, multiple or even all call types, the size of the song repertoire for… bowheads in 2008-2009 is remarkable and more closely approaches that of songbirds than other… whales,” they wrote in the report.

They have yet to learn why the whales sang so consistently last year. 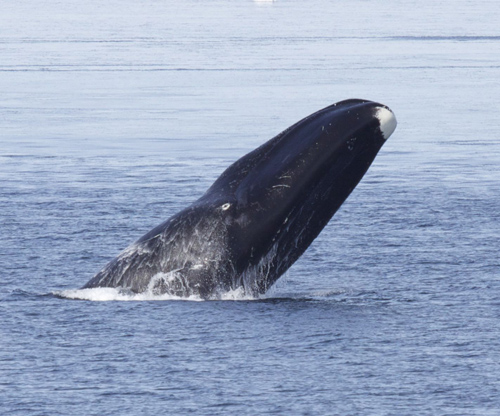 This bowhead whale is a member of the population that lives in the Alaskan Beaufort Sea. The bowheads that were the subject of this study are rarely seen. Image credit: Kate Stafford

Scientists believe that bowhead whale song comes from males during mating season. In most other kinds of whales, individuals either sing the same song their whole lives or all members of a population sing the season’s same popular tune. If bowheads are like the former, that would mean more than 60 males were in the Fram Strait. If the population is evenly split between males and females, there could have been more than 100 whales – far more than anyone thought comprised this population.

With further study, the scientists instead could discover that individual bowhead whales have a repertoire of songs that they sing during a season. That would be equally interesting because it would make the bowheads the only known whales to sing a variety of songs in the same season.

The findings also hint at the possibility of a rebound in bowhead whales.

“If this is a breeding ground, it would be spectacular,” said Stafford. “For such a critically endangered species, it’s really important to know that there’s a reproductively active portion of the population.”

In addition, since the whales are difficult to study given their year-round residence in the Arctic, virtually nothing was known about where they spend their winters. The research offers a clue about the whales’ migration path. 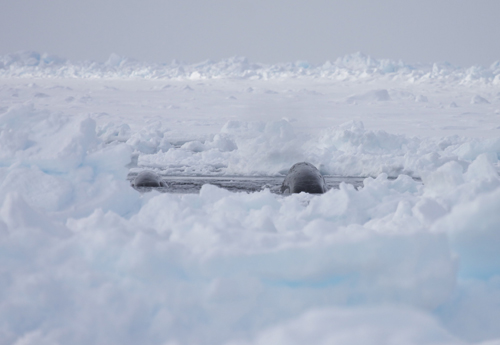 Bowhead whales are massive creatures. They grow to over 60 feet long, may live to 200 years old and can weigh 200,000 pounds. They use their huge skulls to break through ice as thick as 1.5 feet.

Bowhead whale song is unique in that the whales appear to sing with “two voices,” simultaneously producing high- and low-frequency sounds. The whales sometimes repeat the same tune for hours at a time.

Stafford and her colleagues deployed the two hydrophones 60 miles apart. They made 2,144 hours of simultaneous recordings from September 2008 through July 2009. In order to conserve battery power and take recordings for a longer period of time, the hydrophones worked for nine minutes out of every half hour.

The hydrophone in the west, covered in dense ice and in colder water, picked up far more singing than the one in the east, where there was spotty ice coverage and warmer water. The greatest frequency of song occurred in the darkest, coldest period.

“It’s clear there’s a habitat preference,” Stafford said. The thick canopy of ice may provide better acoustics than the loose pack ice and therefore might be favored by singing whales, she said.

“As Arctic sea ice declines, there may be some places like this that are important to protect in order to preserve a breeding ground for the bowhead whales,” Stafford said.

To answer new questions that the data opens up – including how many whales make up this North Atlantic population – Stafford hopes to do additional study.

Co-authors of the paper include Sue Moore and Catherine Berchok from the National Oceanic and Atmospheric Administration; Øystein Wiig of the University of Oslo; Christian Lydersen, Edmond Hansen and Kit M. Kovacs from the Norwegian Polar Institute; and Dirk Kalmbach with the Alfred Wegener Institute of Polar and Marine Research in Germany. The research was funded by NOAA and supported by the Norwegian Polar Institute and the Alfred Wegener Institute.