Pancreatic cancer is a particularly devastating disease. At least 94 percent of patients will die within five years, and in 2013 it was ranked as one of the top 10 deadliest cancers.

Routine screenings for breast, colon and lung cancers have improved treatment and outcomes for patients with these diseases, largely because the cancer can be detected early. But because little is known about how pancreatic cancer behaves, patients often receive a diagnosis when it’s already too late.

University of Washington scientists and engineers are developing a low-cost device that could help pathologists diagnose pancreatic cancer earlier and faster. The prototype can perform the basic steps for processing a biopsy, relying on fluid transport instead of human hands to process the tissue. The team presented its initial results this month (February 2014) at the SPIE Photonics West conference and recently filed a patent for this first-generation device and future technology advancements.

“This new process is expected to help the pathologist make a more rapid diagnosis and be able to determine more accurately how invasive the cancer has become, leading to improved prognosis,” said Eric Seibel, a UW research professor of mechanical engineering and director of the department’s Human Photonics Laboratory. 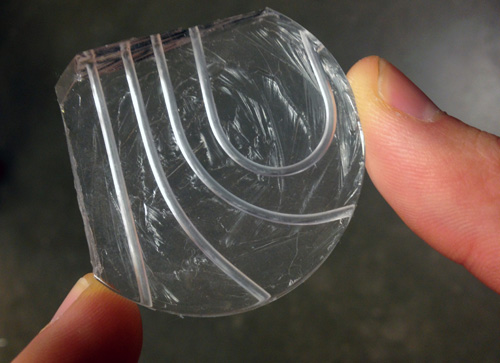 This prototype of a microfluidic device has both curved and straight channels for transporting tissue biopsies. The silicon material is lightweight, flexible and transparent. Image credit: U of Washington

The new instrumentation would essentially automate and streamline the manual, time-consuming process a pathology lab goes through to diagnose cancer. Currently, a pathologist takes a biopsy tissue sample, then sends it to the lab where it’s cut into thin slices, stained and put on slides, then analyzed optically in 2-D for abnormalities.

The UW’s technology would process and analyze whole tissue biopsies for 3-D imaging, which offers a more complete picture of the cellular makeup of a tumor, said Ronnie Das, a UW postdoctoral researcher in bioengineering who is the lead author on a related paper.

“As soon as you cut a piece of tissue, you lose information about it. If you can keep the original tissue biopsy intact, you can see the whole story of abnormal cell growth. You can also see connections, cell morphology and structure as it looks in the body,” Das said.

In this video, tissue biopsies first are seen moving through the transparent channels of a microfluidic device. In the second cut, an optical clearing fluid illuminates the original channels. Moving whole tissue samples through such a device is unprecedented.

The research team is building a thick, credit card-sized, flexible device out of silicon that allows a piece of tissue to pass through tiny channels and undergo a series of steps that replicate what happens on a much larger scale in a pathology lab. The device harnesses the properties of microfluidics, which allows tissue to move and stop with ease through small channels without needing to apply a lot of external force. It also keeps clinicians from having to handle the tissue; instead, a tissue biopsy taken with a syringe needle could be deposited directly into the device to begin processing.

In this video, a piece of tissue first is deposited into the microfluidic device by a needle that is used clinically by pathologists to take biopsy samples from patients. The tissue then is propelled down a channel, where both a stain and a wash process the tissue, simulating steps in a pathology lab. Finally, the tissue is moved along the channel and out of the device.

Researchers say this is the first time material larger than a single-celled organism has successfully moved in a microfluidic device. This could have implications across the sciences in automating analyses that usually are done by humans. 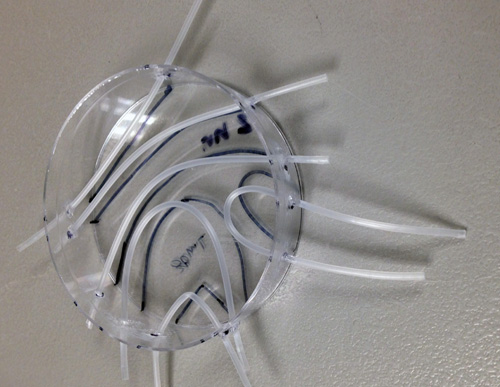 The mold for making a microfluidic device. Teflon tubes are inserted into a petri dish, then silicon is poured in. After the material hardens, engineers remove the disposable container and are left with an intact device. Image credit: U of Washington

Das and Chris Burfeind, a UW undergraduate student in mechanical engineering, designed the device to be simple to manufacture and use. They first built a mold using a petri dish and Teflon tubes, then poured a viscous, silicon material into the mold. The result is a small, transparent instrument with seamless channels that are both curved and straight.

The researchers have used the instrument to process a tissue biopsy one step at a time, following the same steps as a pathology lab would. Next, they hope to combine all of the steps into a more robust device – including 3-D imaging – then build and optimize it for use in a lab. Future iterations of the device could include layers of channels that would allow more analyses on a piece of tissue without adding more bulk to the device.

For Burfeind, who started working in Seibel’s lab his sophomore year, the research apprenticeship has been beneficial both for his college experience and future career, and for the lab.

“I’m getting theory from my professors in class, then applying it to my research here,” Burfeind said. “I see this research as a way to enhance cancer diagnosis and catch it earlier so patients can have a better chance of survival.” 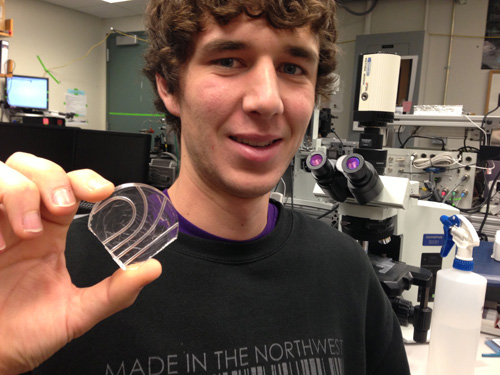 The UW researchers say the technology could be used overseas as an over-the-counter kit that would process biopsies, then send that information to pathologists who could look for signs of cancer from remote locations. Additionally, it could potentially reduce the time it takes to diagnose cancer to a matter of minutes, Das said.

The team is working with Melissa Upton, a pathologist with UW Medicine. The research is funded by the National Science Foundation Bioengineering division and the U.S. Department of Education Graduate Assistance in Areas of National Need program.