Creating an artificial sense of touch through electrical stimuli

A new study led by University of Chicago neuroscientists brings them one step closer to building prosthetic limbs for humans that recreate a sense of touch through a direct interface with the brain.

The research, published Oct. 26 in the Proceedings of the National Academy of Sciences, shows that artificial touch is highly dependent on several features of electrical stimuli, such as the strength and frequency of signals. It describes the specific characteristics of these signals, including how much each feature needs to be adjusted to produce a different sensation.

“This is where the rubber meets the road in building touch-sensitive neuroprosthetics,” said Sliman Bensmaia, associate professor of organismal biology and anatomy and senior author of the study. “Now we understand the nuts and bolts of stimulation, and what tools are at our disposal to create artificial sensations by stimulating the brain.” 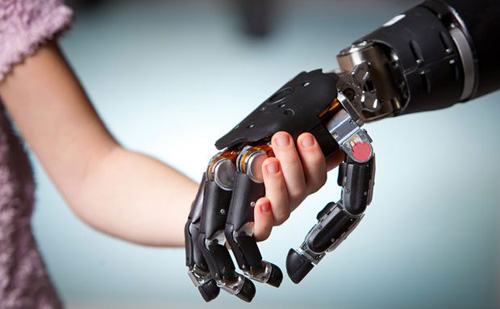 A study led by neuroscientists from UChicago shows that artificial touch is highly dependent on several features of electrical stimuli, such as the strength and frequency of signals, and describes the specific characteristics of these signals. Image courtesy of Johns Hopkins University Applied Physics Laboratory

Bensmaia’s research is part of Revolutionizing Prosthetics, a multi-year Defense Advanced Research Projects Agency project that seeks to create a modular, artificial upper limb that will restore natural motor control and sensation in amputees. The project has brought together an interdisciplinary team of experts from government agencies, private companies and academic institutions, including the Johns Hopkins University Applied Physics Laboratory and the University of Pittsburgh.

Bensmaia and his UChicago colleagues are working specifically on the sensory aspects of these limbs. For this study, monkeys, whose sensory systems closely resemble those of humans, had electrodes implanted into the area of the brain that processes touch information from the hand. The animals were trained to perform two perceptual tasks: one in which they detected the presence of an electrical stimulus, and a second in which they indicated which of two successive stimuli was more intense.

During these experiments, Bensmaia and his team manipulated various features of the electrical pulse train, such as its amplitude, frequency and duration, and noted how the interaction of each of these factors affected the animals’ ability to detect the signal. 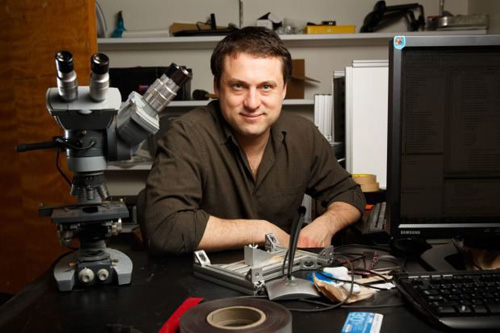 Of specific interest were the “just-noticeable differences,” or the incremental changes needed to produce a sensation that felt different. For instance, at a certain frequency, the signal may be detectable first at a strength of 20 microamps of electricity. If the signal has to be increased to 50 microamps to notice a difference, the JND in that case is 30 microamps.

The sense of touch is really made up of a complex and nuanced set of sensations, from contact and pressure to texture, vibration and movement. By documenting the range, composition and specific increments of signals that create sensations that feel different from each other, Bensmaia and his colleagues have provided the “notes” scientists can play to produce the “music” of the sense of touch in the brain.

“When you grasp an object, for example, you can hold it with different grades of pressure. To recreate a realistic sense of touch, you need to know how many grades of pressure you can convey through electrical stimulation,” Bensmaia said. “Ideally, you can have the same dynamic range for artificial touch as you do for natural touch.”

The study has important scientific implications beyond neuroprosthetics as well. In natural perception, a principle known as Weber’s Law states that the just-noticeable difference between two stimuli is proportional to the size of the stimulus. For example, with a 100-watt light bulb, you might be able to detect a difference in brightness by increasing its power to 110 watts. The JND in that case is 10 watts. According to Weber’s Law, if you double the power of the light bulb to 200 watts, the JND would also be doubled to 20 watts.

“It shows that there is something fundamentally different about the way the brain responds to electrical stimulation than it does to natural stimulation,” Bensmaia said.

“This study gets us to the point where we can actually create real algorithms that work. It gives us the parameters as to what we can achieve with artificial touch, and brings us one step closer to having human-ready algorithms.”

The study, “Behavioral assessment of sensitivity to intracortical microstimulation of primate somatosensory cortex,” was supported by the Defense Advanced Research Projects Agency Contract N66001-10-C-4056. Additional authors include Sungshin Kim, Thierri Callier and Gregg Tabot from the University of Chicago, Robert Gaunt from the University of Pittsburgh, and Francesco Tenore from Johns Hopkins University.