Washington, D.C.—Earth’s magnetic field is generated by the motion of liquid iron in the planet’s core. This “geodynamo” occasionally reverses its polarity—the magnetic north and south poles swap places. The switch occurs over a few thousand years, and the time between reversals can vary from some tens of thousands to tens of millions of years.

When magnetic polarity remains stable in one orientation for more than 10 million years the interval is dubbed a “superchron.” Within the last 540 million years—the time when animals have roamed the Earth’s land and seas—there are three known superchron periods, occurring about once every 200 million years. 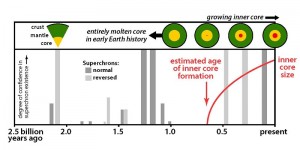 This figure illustrates superchrons of both normal and reversed polarity over time as the Earth’s molten core formed and solidified. It is provided courtesy of Peter Driscoll and David Evans (Click image to enlarge).

The question of how frequently reversals and superchrons occurred over a longer segment of Earth’s history is important for understanding the long-term evolution of the internal and surface conditions of our planet. But so far, such information has only been pieced together by fragmentary evidence.  New work from Carnegie’s Peter Driscoll and David Evans of Yale University now identifies as many as 10 additional superchrons over a 1.3 billion-year stretch of time during the Proterozoic Eon, or Earth’s middle age, which occurred 2.5 to 0.54 billion years ago. Their work is published in the March 1st issue of Earth and Planetary Science Letters.

Records of magnetic field reversals can be found in rocks that maintain the magnetic polarity of the era in which they formed.  In order to establish evidence of a polarity shift, this kind of ancient magnetic, or “paleomagnetic,” data must be gathered from around the globe, ideally sampling every tectonic plate.

Driscoll and Evans compiled a database of global paleomagnetic data from the Proterozoic, and coordinated their reversal records with the movements of the tectonic plates to look for long periods with either strongly northern or southern polarity dominance.  These super-long periods of polarity bias then revealed the previously unknown ancient superchrons.

“Our study points the way towards new questions about fundamental aspects of Earth’s evolution,” Driscoll said. “One of the major implications of these findings is that geodynamo-driven superchrons have occurred at a similar rate for most of the past two billion years.”

This was surprising, because geophysicists have good reason to suspect that there was a major change in Earth’s core within that time interval.  Due to Earth steadily cooling, losing heat to space since the time of its formation, the planet’s inner core—a giant mass of solid iron at the center of the planet—should have started to crystallize between about a half billion and one billion years ago.  The growth of the solid inner core is fundamental to the physics of the geodynamo. Computer simulations of reversal rates are very different depending on whether or not the planet has a solid inner core.

One possible explanation for Driscoll and Evans’s new result is that the Earth’s inner core is actually much older than has been previously estimated, but this idea would conflict strongly with the most-reasonable planetary cooling models.  Another explanation invokes an unexpected resilience of the geodynamo in the face of dramatic changes to its structure, including something as fundamental as the solidification of the inner core.

“We think the latter is more likely,” Driscoll added. “But regardless of which answer is correct, these results mean that we may need to rethink our models for either core evolution or the geodynamo process.”